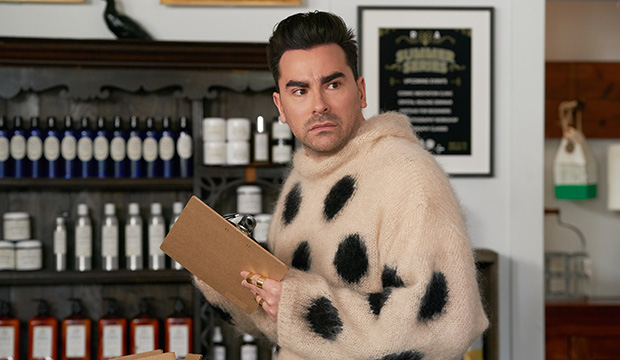 Dan Levy can’t duplicate his quadruple Emmy wins at the Golden Globes since the Hollywood Foreign Press Association doesn’t have two of those categories, but he is predicted to take home two: as a producer on Best Comedy Series front-runner “Schitt’s Creek” and in Best TV Supporting Actor. If he pulls off the latter, he will definitely have the last laugh.

A Levy victory for his Emmy-winning performance would mark only the fourth time this century that the category has gone to an actor from a comedy. Robert Downey Jr. did it in 2001 for his comeback on “Ally McBeal,” followed by “Entourage’s” Jeremy Piven in 2008, aka the year of the writers’ strike, and most recently, “Glee” star Chris Colfer in 2011. So, yes, it’d be a decade between funny men triumphs.

Comedies struggle in the Globes’ TV supporting categories, which combine all genres, and they’re unsurprisingly oftentimes no match for the Much More Serious dramas, limited series and TV movies. On the actress side, the HFPA has anointed just two comedic performances since 2000: Kim Cattrall (“Sex and the City”) in 2003 and Jane Lynch (“Glee”) in 2011.

Earlier this year, Andrew Scott was widely predicted to win the TV supporting actor Globe “Fleabag” over the elder Skarsgard. The prevailing notion was that Scott would benefit from his Emmy snub, allowing the HFPA to swoop in and look cool for kneeling to Hot Priest. Levy has the opposite narrative: His show swept the Emmys, going a historic 7 for 7, so Globe voters now have the opportunity to rubber-stamp “Schitt’s Creek” — a show they have never nominated — but they don’t often do that either as they usually gravitate toward new shows or just whatever the hell they like.

Ironically, Levy’s closest competitor also hails from a comedy: Nicholas Hoult, who sits in second in our early odds for first-time contender “The Great.” Brendan Gleeson is in third for his take on President Donald Trump on “The Comey Rule,” followed by Josh O’Connor (“The Crown”) and Tom Pelphrey (“Ozark”). 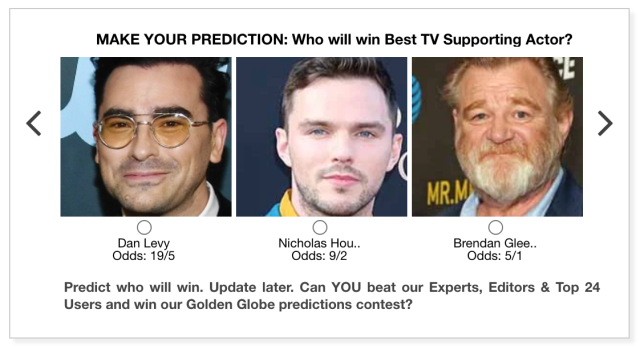