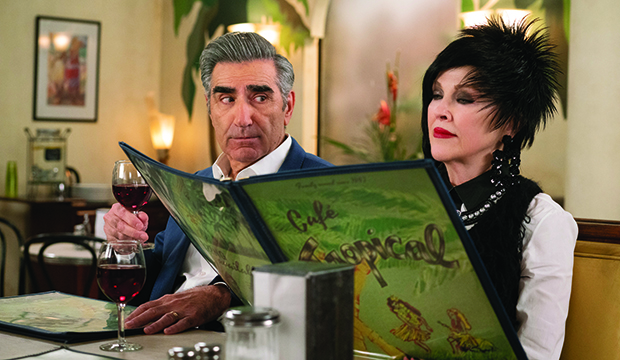 Last chance, best chance? “Schitt’s Creek” has a healthy lead in our predictions to take home the Best Comedy Series Emmy, which would make it just third comedy to win the top award for the first time with its last season.

The Pop TV series would join “Barney Miller” and reigning champ “Fleabag” in this exclusive club. The former reaped seven Best Comedy Series nominations during its eight-season run, missing just for its first season as a midseason replacement on ABC’s schedule. “The Mary Tyler Moore Show” (1976-77), “All in the Family” (1978) and “Taxi” (1979-81) all beat “Barney Miller” before the police sitcom finally prevailed with its eighth and final outing in 1982.

“Fleabag’s” Emmy résumé was the opposite of “Barney Miller’s” before its triumph last year. Phoebe Waller-Bridge‘s one-woman-show-turned-series got exactly zero nominations for its inaugural season when it was eligible in 2017. But its second and final season was a total phenomenon last summer, netting 11 bids and winning six, including three for PWB for comedy series, actress and writing. “Fleabag” is a unique case because it only lasted two seasons — Waller-Bridge is open to revisiting “Fleabag” one day… maybe when she’s 50 — and most shows, especially Emmy nominees for their final seasons, typically run longer than that. “Barney Miller” and “Schitt’s Creek,” which wrapped in April with its sixth season, were both closer to 10 seasons than one when they ended.

“Schitt’s Creek” surprised with four bids last year, including series and lead acting mentions for Catherine O’Hara and Eugene Levy, both of whom won writing Emmys for “SCTV” in 1982 — yes, the same year “Barney Miller” triumphed. Coincidence? The slow-and-steady love for the show, which rose as fans discovered it on Netflix, crested at the perfect time as “Schitt’s” headed into its final season earlier in January. It earned 15 nominations this year.

Now, the TV academy isn’t overly sentimental when it comes to handing out farewell hugs. Lots of programs have failed to go out with a series win or even a nomination, but in most of these cases, those shows had won the top prize before, and voters had already moved on to the new thing they like — factors that don’t apply to “Schitt’s Creek” (in fact, the show may be that “new thing” to voters even though it’s technically old). “Frasier” never won comedy series again after its five-peat in the ’90s, and fellow five-peater “Modern Family” did not make the series lineup with its 11th and final season this year. “30 Rock” won a writing Emmy for its series finale in 2013, but failed to add a fourth series statuette to its collection, losing to “Modern Family.” And “Veep,” a three-time series champ that ended last year with its seventh season, proved to be no match for “Fleabag.”

“Schitt’s Creek” is expected to have a big night in general, as our odds are also forecasting three main acting awards, along with writing and directing honors, as part of its haul.

Former champ “The Marvelous Mrs. Maisel” is in second in our odds, followed by “The Good Place,” which also bid adieu this year, “Insecure,” “What We Do in the Shadows,” “Dead to Me,” “Curb Your Enthusiasm” and “The Kominsky Method.” 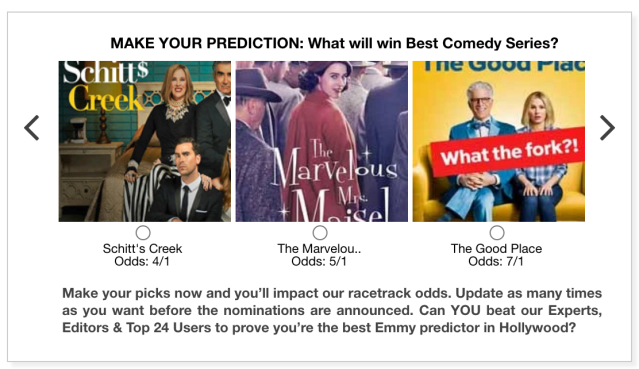