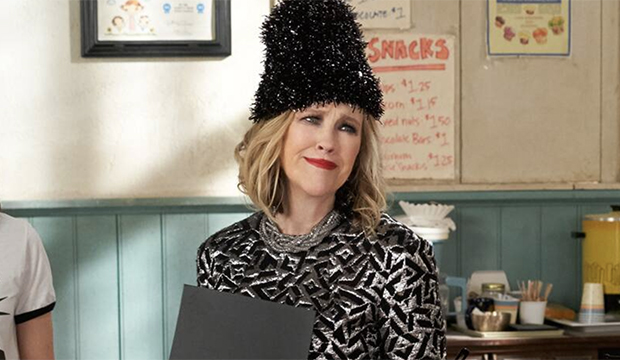 Moira Rose’s exact age is unknown — though she did play Liesl von Trapp at 50 — but we do know Catherine O’Hara‘s: She is 66 years young, and if she wins the Best Comedy Actress Emmy, as widely predicted, for “Schitt’s Creek,” she’d become the category’s second oldest champ ever.

Bea Arthur was also 66 when she prevailed for “The Golden Girls” in 1988, but when you get down to the days, O’Hara will be a tad older on Emmy night than Arthur was — 66 years, 6 months and 17 days vs. 66 years, 3 months and 16 days — so she’d get the solo No. 2 honor in the category, which was formally established in 1966 and has undergone various names (previous years, outside of 1959, were not genre specific). They have nothing on record holder Ruth Gordon, who was 82 years, 10 months and 11 days old when she won for “Taxi” in 1979. And if that’s not enough to blow your mind, the legendary star and screenwriter was born in the 19th century (1896).

While Gordon is technically the oldest comedy actress winner, her victory does come with an asterisk because she was really a guest star and prevailed for the only episode of “Taxi” in which she appeared over its five-season run (Carol Kane was also a guest star on “Taxi” who won this category in 1982 before becoming a series regular). So you could say that O’Hara would be the oldest comedy actress winner who was actually a lead on her show — or at the very least, a series regular.

The comedy icon, who has a writing Emmy for “SCTV,” would also just be the fourth winner in her 60s, as most comedy actress queens have been in their 30s or 40s. Betty White was 64 years and 8 months old at the time of her win for “The Golden Girls” in 1986. Isabel Sanford, the category’s first and only Black champ, triumphed for “The Jeffersons” 16 days after her 64th birthday in 1981.

O’Hara is the oldest nominee in the category and has nearly two decades on the next oldest, Christina Applegate (“Dead to Me”), who is 48 and is in fourth in our odds. Tracee Ellis Ross (“Black-ish”) is 47 and in sixth; Linda Cardellini (“Dead to Me”), 45 and fifth; Issa Rae (“Insecure”), 35 and third; and Rachel Brosnahan (“The Marvelous Mrs. Maisel”) is the youngest at 30 and is in second place. Brosnahan, who was 28 when she won two years ago, is the category’s second youngest champ after then-23-year-old America Ferrera (“Ugly Betty”), who was crowned in 2007. 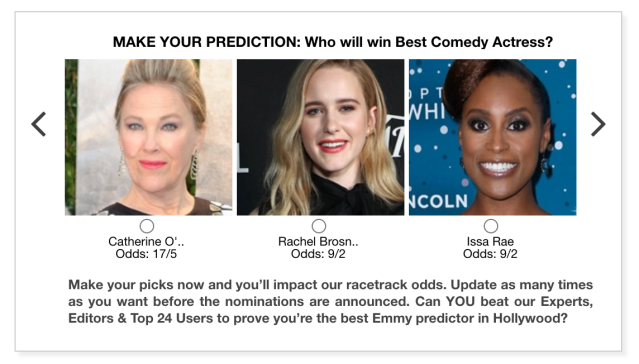