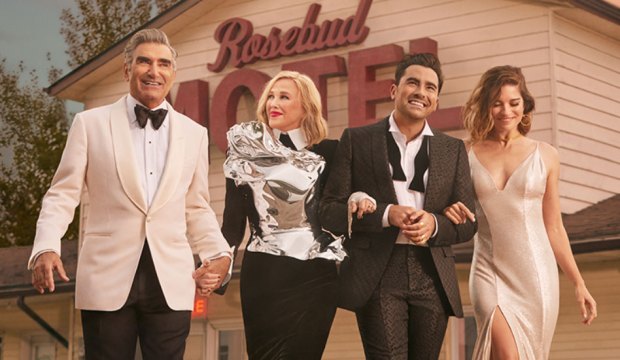 “Schitt’s Creek” finally broke through at the Emmys in 2019 with four nominations: Best Comedy Series, Best Comedy Actor (Eugene Levy), Best Comedy Actress (Catherine O’Hara) and Best Contemporary Costumes. But it’s poised to make an even bigger splash in 2020 for its sixth and final season, where our odds say it’s one of the top contenders to win. Scroll down to see the 34 entries for the show on this year’s Emmy ballots (28 for the show itself, six more for its farewell documentary special). How many nominations do you think it will get, and how many of those will it win?

That’s not the only place Dan Levy could score. He’s also a contender for Best Comedy as an executive producer of the series. And he’s up for consideration as both a writer and director of the series finale episode, “Happy Ending.” In fact, that farewell installment of the show is submitted eight times: in addition to writing and directing, it’s also being considered for its costumes, hairstyling, makeup, picture editing, sound editing and sound mixing.

It would be a remarkable feat if “Happy Ending” earned all those nominations, but it would be even more historic if the show won them too. To date, the record for the most Emmys for a single episode of television is six, shared by the “Boardwalk Empire” pilot and the “Game of Thrones” epic “Battle of the Bastards.” The aptly titled “Happy Ending” could do it too since it will be considered in most of its categories against other comedies and not against the blockbuster production values of shows like “The Crown,” “Westworld,” “Stranger Things” and “The Handmaid’s Tale.” So how many “Schitt’s” do you think the Emmys will give?

SEENoah Reid (‘Schitt’s Creek’): ‘Patrick sees a lot of himself in Johnny and a lot of David in Moira’ [EXCLUSIVE VIDEO INTERVIEW]