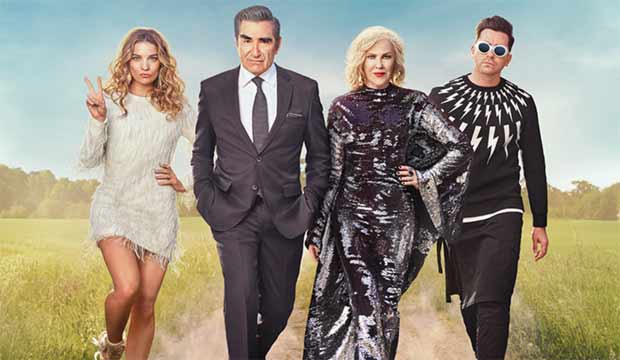 “30 Rock” is one of Emmy’s favorite shows of all time, winning 16 trophies from 103 nominations. Fey created the series about a late night comedy program and also starred as Liz Lemon, the head writer of the “SNL”-like show that’s overseen by network executive Jack Donaghy (Baldwin). The low-rated “30 Rock” won the Emmy for Best Comedy Series three years in a row (2007-09), which no doubt helped save it from an early cancellation.

To compare, “Schitt’s Creek” is, well, the opposite of an Emmy favorite. This laffer about a rich family who loses everything and has to move to a tiny blue-collar town was completely skunked for its first four seasons before it broke through last year with four bids: series, actor, actress and costumes. Emmy voters finally discovered the Pop series thanks to a combination of word-of-mouth and Netflix’s acquisition of the old episodes, which they seemingly binge-watched in one fell swoop.

As of this writing two of Gold Derby’s Emmy Experts — Joyce Eng (Gold Derby) and Chris Harnick (E!) — predict victories for “Schitt’s Creek” as Best Comedy Series, O’Hara as Best Comedy Actress and Levy as Best Comedy Actor. As Eng explains, the show recently capped off “a remarkable six-season run that only grew in quality, acclaim, fan adoration and industry love as the years went on.” Do you agree with Eng and Harnick? There’s still time to make your predictions and influence our overall racetrack odds.