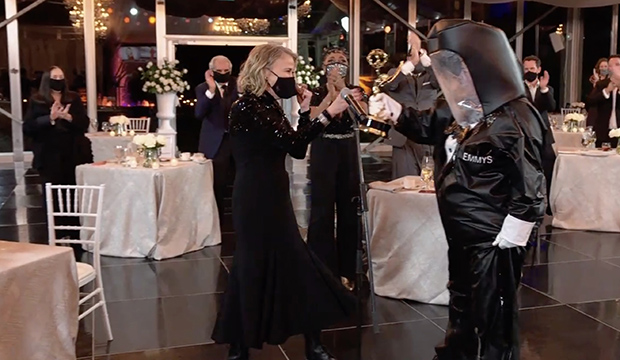 Emmy producers went to great lengths to simulate a true winning moment in the time of COVID-19, sending presenters decked out in tuxedo hazmat suits to every nominee’s home or location of their choosing to deliver statuettes to the winners live on Sunday. And don’t think they skimped out — seven Emmys were shipped to Canada in case “Schitt’s Creek” won all seven comedy categories, which, well, it did.

“Last week, I got a FedEx delivery of all seven trophies to my house. And then I was lucky because I didn’t have to send a single Emmy back,” Kathleen Ryan, a Toronto-based event producer who was hired to be the “Schitt’s” trophy presenter at its COVID-safe, socially distanced party, told “Toronto Life.” (We already know what happens when you lose.)

Ryan, who runs Kathleen Ryan Productions, said she had a “good feeling” “Schitt’s” would have a golden night, but she did not know the winners in advance. Well, sort of. She heard the announcements four seconds earlier via her earpiece that was synced up with the actual live feed.

“When the categories were announced, I would be waiting off to the side and ready to go. People at the tables might have thought I knew in advance. I saw people watching me for signs: like, if I didn’t look ready, that would mean they weren’t going to win,” Ryan recalled. “In reality, I found out at the same time as everyone else. Well actually, I found out about four seconds earlier because my earphones were synced up with L.A. and everyone else was on a delay.”

A “big ‘Schitt’s Creek’ fan,” Ryan was thrilled to see a tiny Canadian show get its moment in the sun — and to just work, as she lost 13 contracts in March after the pandemic hit. “It was such an exciting night — kind of like a Canadian Heritage Moment in real time,” she gushed. “I was so happy for the cast and for Canada and for myself and my team. It has been a struggle.”

As for her super 2020 outfit, it’s the “safest” Halloween costume ever, but Ryan wasn’t quite comfortable in it. “We were given the option of three sizes. I went for the medium, and it was definitely roomy. It wasn’t uncomfortable; it was just so hot,” she explained. “I was wearing leggings and long sleeves underneath, when I should have been in a tank top and biker shorts.”