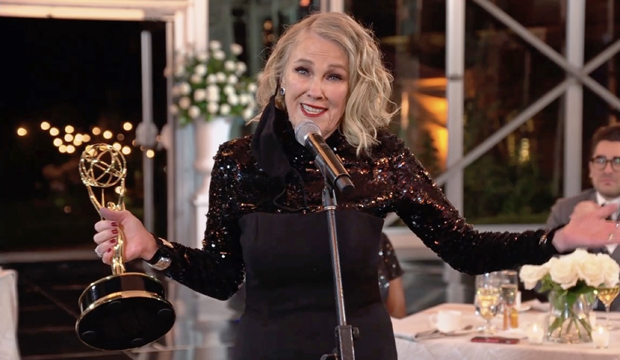 Last year, much was made of “Fleabag” winning Best Comedy Series, actress, writing, directing, etc. for its second season despite being snubbed across the board for its first. What happened, Emmy voters? Why were you so late to the party for this show you clearly loved? Well, multiply that scenario by six years and you have “Schitt’s Creek.”

The heartwarming Canadian series about a rich family who loses everything and moves to a tiny town was skunked by the Television Academy for its first four seasons. Airing on Pop TV here in the United States, “Schitt’s Creek” finally broke through in 2019 with four Emmy bids — series, actor (Eugene Levy), actress (Catherine O’Hara) and costumes — but lost them all. This year, for its final season, the show landed a whopping 15 bids, making it the second most-nominated comedy of the year after “The Marvelous Mrs. Maisel.” It even won a record number of Emmys (see the winners list). So why now after all these years?

SEE2020 Emmy nominations list: The contenders in all 23 categories handed out on September 20

It all comes down to one word: Netflix. The blockbuster streaming service started airing reruns of “Schitt’s Creek” in 2017, which allowed the quirky comedy to find an entirely new audience who’d never even heard of Pop TV. Word of mouth continued to build with each passing year, as eager fans binged the latest season as soon as it was added to the menu. Some folks no doubt even thought it was a Netflix original series.

How many awards voters fall into this category? Probably most of them. “Schitt’s Creek’s” audience was quite small for its first several years on the air, and it wasn’t until the fifth season that it received its first-ever Emmy nominations. But the Emmys aren’t the only ones at fault. The Screen Actors Guild and Critics’ Choice Awards also ignored the show for most of its run. And — shockeroo — it’s still never been nominated for anything at the Golden Globes.

If the whole Netflix/Emmys angle sounds familiar, it’s because a similar thing happened with “Breaking Bad.” When that gritty drama premiered on AMC, you could count on one hand the number of people who watched on a regular basis. But when Netflix acquired the reruns midway through its TV journey, it helped boost the show’s profile exponentially both in terms of viewers and awards. “Breaking Bad” would go on to win Best Drama Series for its last two half-seasons.

The final season of “Schitt’s Creek” will debut on Netflix in October, though it already aired on Pop TV and CBC Television in the spring. TV Academy members were given private links during Emmy voting so they could watch and judge the final 14 episodes.

Below is the list of everything “Schitt’s Creek” won at the 2020 Emmys. By winning nine trophies, it broke the previous record of eight set by “The Marvelous Mrs. Maisel” in 2018 and 2019.