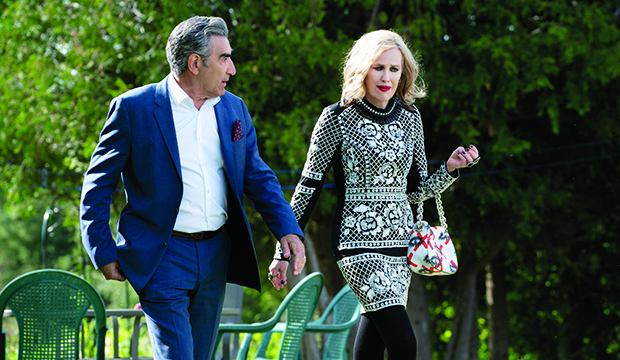 Right now Gold Derby’s predictions overwhelmingly say the Golden Globes will go overboard for “Schitt’s Creek,” with wins for Best Comedy Series, Comedy Actress (Catherine O’Hara), Comedy Actor (Eugene Levy) and Supporting Actor (Dan Levy), plus a nomination for Supporting Actress (Annie Murphy). That would mostly echo the show’s recent sweep of the Emmy Awards, for which it went 7-for-7 at the Primetime ceremony, a first for any comedy. The only problem? Hollywood Foreign Press Association members hate being told what to do by their big sister Emmy. In fact, some of Emmy’s favorite shows seemed to almost be purposely left off of the Golden Globes’ winners list, including most recently “Veep.”

HBO’s gone-but-not-forgotten political comedy won three Emmys for Best Comedy Series but never took home the Globe in that category. In fact, “Veep” never took home a single Globe in any category — not even for Julia Louis-Dreyfus, who won a record six Emmys in a row for playing Vice President-turned-President Selina Meyer. “Veep” was a frequent Golden Globe nominee through the years, netting seven total bids, until its final season when the HFPA decided to drop the show completely. Ouch.

The final season of “Schitt’s Creek” aired in the spring and just started streaming on Netflix in October. It’s possible “Veep’s” fate could similarly befall the beloved Pop comedy at the Golden Globes, with voters thinking it’s old news and moving on to something else new and shiny. Keep in mind “Schitt’s Creek” has never received a single Globe nomination, suggesting perhaps they’ve never even seen it — or if they have, they didn’t like it. The Emmys were late to the party, too, by ignoring the Canadian laffer until its penultimate season, but they made up for that big time this year.

SEEEw, David: Here’s why it took 6 years for ‘Schitt’s Creek’ to finally win some Emmys

On rare occasions, TV shows receive so much Emmy attention the Globes almost appear to feel guilted into awarding them. “Breaking Bad” is a perfect example; for whatever reason, HFPA members just didn’t connect with AMC’s landmark drama series the way everyone else did. While it kept racking up Emmy after Emmy, the Globes didn’t give it a series trophy until its final hurrah, which is when four-time Emmy acting winner Bryan Cranston also received his first statue.

In truth, it’s unlikely the HFPA will want to be seen as out-of-touch or uncool by the masses by skunking “Schitt’s Creek” for its heralded last episodes. They raised many eyebrows when they failed to reward “Veep” and “Game of Thrones” in the series races, with “GoT” only nabbing one Golden Globe, for supporting player Peter Dinklage. Voters made sure the same thing didn’t happen last year, when they rewarded fan-fave “Fleabag” with two trophies (series and actress Phoebe Waller-Bridge) despite previously snubbing its first season.