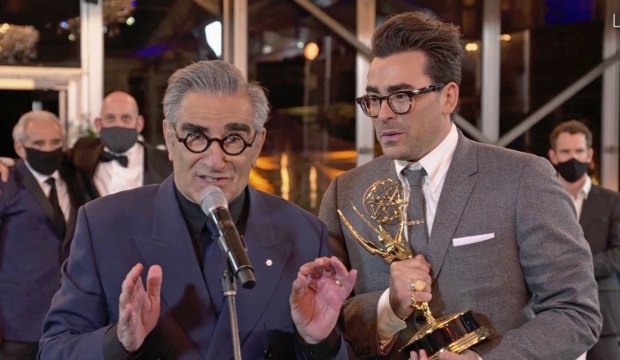 In September “Schitt’s Creek” did something no comedy had ever done before: it won all seven of its categories during the Primetime Emmys ceremony. It claimed Best Comedy Series, all four lead and supporting awards, and prizes for its writing and directing. Its next awards test will be the Golden Globes, which are not decided by television industry peers like the Emmys, but by fewer than 100 international journalists who make up the Hollywood Foreign Press Association. Could it win all of its categories there too?

But will Globes voters go for it? After all, these awards are known to favor brand new programs, not shows that have been around for six seasons. But that’s not always the case. Sometimes the HFPA likes to plant its flag by anointing new favorites, but often they also like to jump on a bandwagon. Consider last year’s Globes champ, “Fleabag”: like the Emmys, the Globes didn’t give it the time of day in season one, but after it ruled the Emmys in 2019 the Globes followed suit.

HFPA voters were late to the party on other shows too. The only Globes “Breaking Bad” ever won were Best Drama Series and Best Drama Actor (Bryan Cranston) in 2014 for its final season. “The Americans” won its first and only Globe for Best Drama Series for its sixth and final season in 2019. And a number of limited series ruled the Globes following their Emmy coronations like “The People v. O.J. Simpson” (2017), “Big Little Lies” (2018), “The Assassination of Gianni Versace” (2019) and “Chernobyl” (2020).

The Globes clearly don’t like to be left behind if a show is taking the rest of the industry by storm. And “Schitt’s Creek” has certainly done that in 2020. Will it be too big to fail?