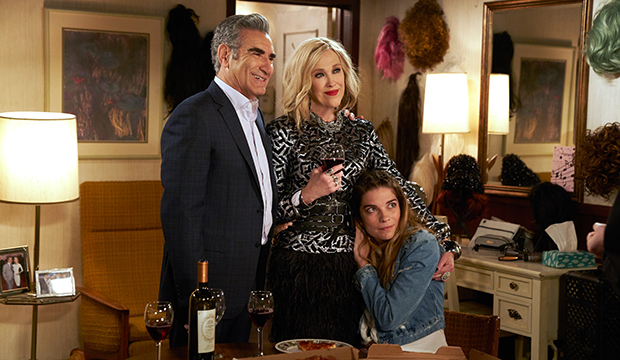 “Schitt’s Creek” made Emmy history by becoming the first comedy to win all seven categories at the main ceremony in September, and now it can accomplish a similar feat at the Screen Actors Guild Awards. It is the odds-on favorite to nab all three comedy categories and would be just the third show to do so.

While SAG Awards voters love themselves a repeat champ, a single comedy sweeper has been rare to come by. In the awards’ 26-year history, the only series to go 3 for 3 are “30 Rock” in 2009 and “The Marvelous Mrs. Maisel” 10 years later. (This is more common on the drama side — there have been five instances of one show claiming all three.)

“30 Rock” won comedy ensemble just once, while Alec Baldwin and Tina Fey bagged multiple statuettes for their performances. Baldwin, of course, won comedy actor for seven straight years — the 2009 win was his third — and Fey took home four comedy actress awards, including three in a row.

“Maisel,” like so many late-arriving shows that aren’t on Netflix, was snubbed entirely for its first season, which swept basically everywhere else, but SAG-AFTRA made it up to the Amazon series for its sophomore installment, giving it victories for ensemble, actress for Rachel Brosnahan and actor for Tony Shalhoub. “Maisel” defended its ensemble and Shalhoub wins in January, but Brosnahan fell to “Fleabag” creator/star Phoebe Waller-Bridge.

SEE Our odds are in Dan Levy’s favor for his ‘Schitt’s Creek’ turn, but Golden Globe history is not

And with all three reigning comedy champs out of the running this year, there is no chance for the SAG Awards to rubber-stamp its own winners; it can, however, rubber-stamp the Emmy champ. “Schitt’s” already has a footprint at SAG, having earned its first two nominations last cycle for ensemble and actress for Catherine O’Hara. Plus, Eugene and Dan Levy kicked off the host-less show with an extended bit. This is also the only chance voters have left to reward the little Canadian show that could. And let’s not forget that “Schitt’s” streams on their favorite service, Netflix.

“Schitt’s” holds comfortable leads in all three categories, the biggest being O’Hara’s 16/5 odds over No. 2 Christina Applegate (“Dead to Me”). Issa Rae (“Insecure”) is in third, followed by O’Hara’s co-star Annie Murphy and Linda Cardellini (“Dead to Me”), respectively.

The show is out front with 16/5 odds in ensemble with “Dead to Me” the next closest. “Insecure,” “What We Do in the Shadows” and “The Good Place” round out the top five. 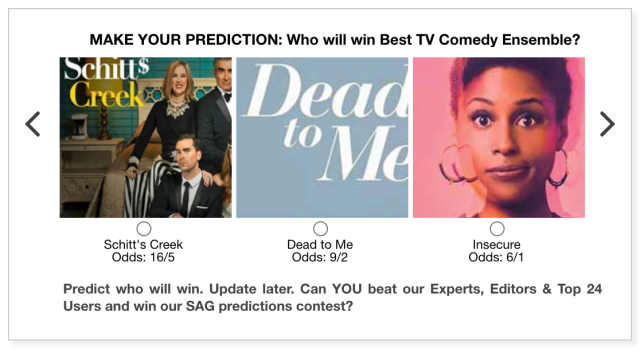