“The thing that we really tried to achieve was just to keep a very naturalistic look for the whole show,” original director of photography Jo Willems reveals in his exclusive interview with Gold Derby about the cinematography of “See” (watch the video above), which is set six centuries from now, when humans are blind and live primitively in tribes. “The tricky thing about the show that you have to understand is nobody can see, nobody has vision, so people don’t really need light to see, so as a cinematographer, that’s quite a tricky beginning, as people don’t need windows, people don’t need lights, candles.”

“It was really important to use the sun in a strategic way,” Willems notes as such for how he set out to achieve a look that was “quite lush — colorful, where nature has taken over again.” He adds about working on the Apple TV+ drama, “Since we shot so much in Vancouver in the fall, we did have quite a bit of changing weather, which was one of the most challenging elements of the shoot — rain… sunny, all in one day.”

Having shot the first three episodes, Willems has submitted the middle installment titled “Message in a Bottle” for Emmy consideration in the Best One-Hour Cinematography category because of a five-minute sequence that begins with Jason Momoa’s character Baba Voss threatening Mojean Aria’s treacherous Gether Bax on a tree stump, “covered in very few shots” with the camera functioning as if it were “very much another character.” Willems elaborates about the selection, “It truly has that Alexa 65 depth of field; it has the way the show was shot in an intimate way. It starts with a day exterior, which we picked the exact right time we wanted to shoot it and I thought the scene was beautiful and it runs into the scene in the forest, where they set the village on fire and then it leads into Queen Kane’s quarters, where you have this beautiful set.” 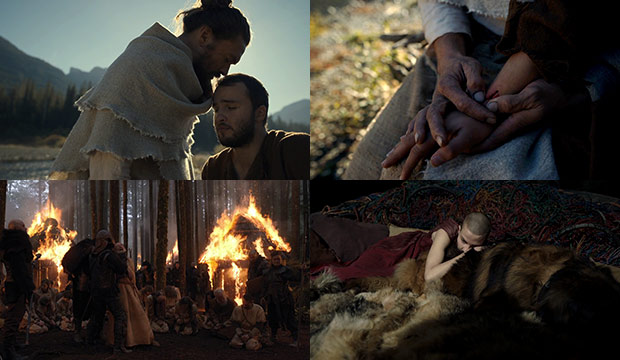 Will “See” score a Best Drama Series nomination? Make your Emmy predictions so that Hollywood insiders can see how their shows and performers are faring in our odds. You can keep changing your predictions as often as you like until the nominations announcement on July 28. And join in the fun debate over the 72nd Primetime Emmy Awards taking place right now with Hollywood insiders in our television forums.