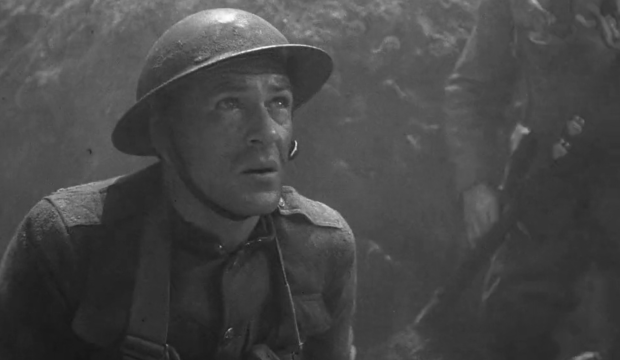 War was raging in Europe in 1941. Though the U.S. hadn’t joined the fight against Hitler and the Nazis, there was a feeling that it would only be a matter of time before we would get involved in the conflict. In fact, President Franklin D. Roosevelt had just won his third term as Commander and Chief and was situating the country as the “Arsenal of Democracy,”  was urging the Congress to pass his Lend-Lease Act in order to supply our Allies with badly needed ammunitions and equipment.

And it was in this atmosphere that Warner Bros. released its patriotic “Sergeant York” that September.  Directed by Howard Hawks — John Huston and Howard Koch were among the four screenwriters — the film chronicled the life of Alvin C. York, a pacificist Tennessee backwoodsman who became one of the most famous World War I heroes.

York only agreed to have Hollywood make his life story if everyman Gary Cooper played him. Though Coop initially turned down the part — he was almost a decade too old for the role — he changed his mind after York talked to him personally.

“Sergeant York,” which was just released on Warner Archive Blu-ray in a stunning 4K restoration from a nitrate fine grain print, was just the stirring production audiences needed with war clouds looming over the U.S. Not only was it the No. 1 box office hit — it made over a then-staggering $6 million — critics were also impressed. The New York Times’ Bosley Crowther stated in his review: “The suggestion of deliberate propaganda is readily detected here; the performance of Gary Cooper in the title role holds the picture together magnificently and even the most unfavorable touches are made palatable because of him.’’

The film went on to earn 11 Academy Award nominations, winning for Coop’s indelible, moving performance and for William Holmes’ film editing. And fun fact: Hawks, who also directed Coop that year in the classic comedy “Ball of Fire,” received his one and only Oscar nomination for directing. Cooper would go on to win a second Best Actor Oscar for “High Noon” in 1953.

The 1942 Academy Awards’ banquet had been cancelled by the academy after the Japanese attack on Pearl Harbor on Dec. 7 which had signaled the U.S. entry into World War II. Two-time Oscar-winner Bette Davis, who had been named the first female president of the academy in November 1941, had suggested after war was declared “that we present the Oscars in a large theater, charging at least $25 a seat and giving the proceeds to the British War Relief. The members of the board were horrified. Such an evening would rob the academy of all dignity.”

Instead, the board of governors, perhaps it should have been called the boys’ club of governors, decided to cancel the banquet which was to take place Feb. 26, 1942 at a fancy soiree at the Biltmore Hotel. The L.A. Times’ Edwin Schallert observed: “One of Hollywood’s most glamorous functions will pass into oblivion temporarily, due to the war. The formal banquet of the Academy of Motion Picture Arts and Sciences will not be held this coming year. Awards will nonetheless be given in some more informal fashion. Decision will be reached in January as to how the awards will be tendered.”

Hollywood was not happy. The Hollywood Reporter’s editor W.R. Wilkerson believed that the academy was offering a poor example “to all our people and makes a pretty heft thrust at national good morale by calling off an event that has been a good diversion…” Davis wasn’t happy either. She tendered her resignation the end of Dec. 1941, later saying, “They wanted a mere figurehead, someone famous to publicize the Academy. I didn’t know that.”

Producer Walter Wanger, who took over the academy reigns in the interim from Davis, brought back the dinner but on a smaller scale with no glitz or glamor. And, of course, the academy would actually adopt Davis’ ideas. Though she would go on to earn six more Oscar nominations, she’d never again win.