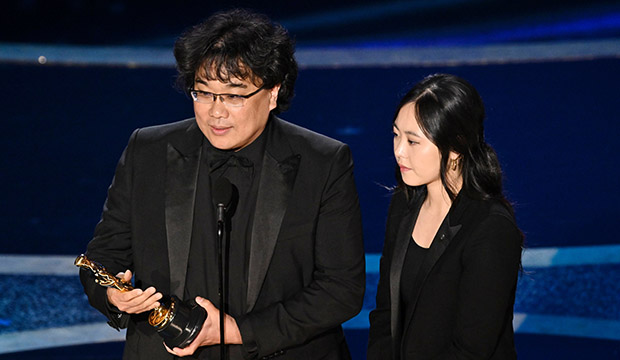 “Parasite” was the big winner at Sunday’s Oscars, snagging four statuettes with a historic Best Picture victory among them, but the true star of awards season is a member of Team “Parasite” who joined after the film was completed: Sharon Choi. Choi has been “Parasite’s” tireless GOAT interpreter, usually for Oscar-winning writer-director Bong Joon Ho, and luckily for us, Sunday will not be the last we see of her.

As Bong revealed after the Golden Globes, Choi is a filmmaker herself. Backstage at the Oscars on Sunday, Bong shared that she’s currently working on a feature script that he’s clearly dying to read. “You already know she’s a filmmaker,” he said when he fielded the final question about Choi. “She studied film in the university, yeah, so I’m so curious about her script. Actually, she’s writing some feature-length script, I’m so curious about it.”

According to “The Wrap’s” Steve Pond, Choi is planning to make a movie about awards season, which is something we definitely want to see.

SEE How did Bong Joon Ho pull off that huge Best Director upset? Here are 5 explanations

A 25-year-old Korean-American currently living in Seoul, Choi joined the “Parasite” team at the Cannes Film Festival in May and has been an indispensable, utterly delightful presence on its campaign since. With her quick, effortless Korean-to-English interpretations for Bong, the cast and crew at awards shows, Q&As, talk shows and various events that always convey the speaker’s tone, humor, nuances and meaning, Choi has amassed her own following online. (Choi is an interpreter, not a translator; translating applies to text, aka written translations, while interpreting is a form of oral translation.)

sharon choi really is the best part of this award season pic.twitter.com/ad5Pz3Mk8m

"she already experienced the highest level of difficulty" holy….. pic.twitter.com/jitMyKKJc0

Bong is well aware of Choi’s growing standom. “I know she has a huge fandom,” he told E! on the red carpet Sunday before expounding in Korean. “It’s very embarrassing to translate, but he said, thanks to me, this campaign has been a smooth journey,” a blushing Choi said.