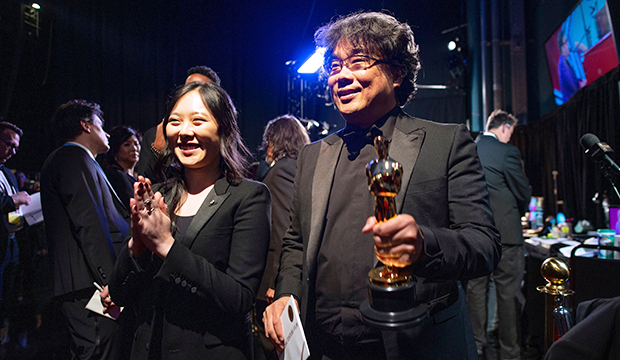 Sharon Choi quickly became a fan favorite and MVP of awards season as Bong Joon Ho‘s indispensable interpreter through the “Parasite” press tour and its Oscar campaign. It culminated two weeks ago at the Oscars, where the South Korean smash nabbed four Oscars, including a historic Best Picture win. Now with a moment’s rest, Choi, an aspiring filmmaker, has written about her whirlwind experience in a vivid, moving essay on our sister site “Variety.”

“The past six months has been a blur of new cities, microphones and good news, with endless orders of honey lemon tea as I tried to preserve my voice,” she writes. “Driven from one crowd to the next, I shook hands with hundreds of people whose eyes shone with the excitement of having watched a special film. Moments alone were still riddled with the absurdity that I was sharing hand sanitizers with a man whose films I’d organized movie nights for in college. Somehow, despite having only micro-short films to my name, I got sucked into the heart of Hollywood.”

The 25-year-old was working on a screenplay last April when she got an email that would change her life: She was asked if she could interpret a phone interview with Bong. Choi had previously interpreted for Lee Chang Dong for a week during the “Burning” press tour. After missing an “obscure film reference” by Bong during their first interview together, Choi was sure she’d be replaced, but she was instead invited to join the “Parasite” team at the Cannes Film Festival, where the movie became the first South Korean film to win the Palme d’Or.

“There was palpable electricity in the Grand Theater Lumiere when the film premiered at Cannes. It was moving to see a film about my home country touch people from so many different cultures. The two years I spent in the U.S. as a kid had turned me into a strange hybrid — too Korean to be American, too American to be Korean, and not even Korean American,” Choi says. “Two cultures are usually just one too many for a film to contain. And yet here was this story that seemed to effortlessly break through all barriers. Originally, I was only needed at the festival for two days to do English press, but I ended up backstage at the closing ceremony sweating with anticipation until ‘Parasite’ was the only one left on the list of films to win an award.”

Choi points out that interpreting has never been her job, but “I’ve been my own interpreter for 20 years” as a bilingual speaker. “All my life I’ve been frustrated by having to choose one of the two. This is why I fell in love with cinema’s visual language,” she notes. As an interpreter, she had no time to reminisce during the season because the job demands you to be focused on the present. “It’s all about the moment that exists now, and I have to wipe away each memory to make room for the next,” Choi says. “I had to rely on the films I’d watched my whole life to soothe my insomnia, to maintain my grasp on Eastern and Western cultures, and on the clarity of director Bong’s articulate words.”

Interpreting for Bong was easy, according to Choi, because of the director’s “consideration” and the fact that she was already familiar with his work and sensibilities, having studied him in school. “Yet I was constantly battling impostor syndrome, and an anxiety that I might misrepresent the words of someone so beloved in front of people I’d grown up admiring,” she adds. “The only cures for stage fright were ten-second meditations backstage, and knowing that I was not who they were seeing. There is no medium I love more than cinema, but I constantly had to tell myself something I overheard a French publicist shout to her stressed peers: ‘It’s just cinema!'”

SEE How did Bong Joon Ho pull off that huge Best Director upset? Here are 5 explanations

Choi shares some of her favorite starstruck moments on the circuit: She professed her undying love for Hot Priest to Phoebe Waller-Bridge, grabbed Taco Bell at 4 a.m. with Celine Sciamma, shut down a restaurant with Lulu Wang (as “Closing Time” played), and fangirled over John Cameron Mitchell, about which Bong teased her. “This journey has been nothing but a privilege,” she declares. “But above all, the true gifts are the private conversations and one-on-one relationships I got to form with team members and artists I saw on a daily basis during this job. I will spend the next years of my life doing my best to earn the chance to work with these people again. It will take a while.”

Contrary to reports, Choi is not writing a film about awards season. “This is a deeply personal experience I’ve yet to process, and it will find another time to seep into my stories,” she explains. Instead, her script is about “a small story set in Korea that’s close to my heart because, as director Bong quoted the sincere words of Martin Scorsese, ‘the personal is the most creative.'”

“It’ll just be me and my laptop for a while, and the only translating job I have now is between myself and the language of cinema,” she says.