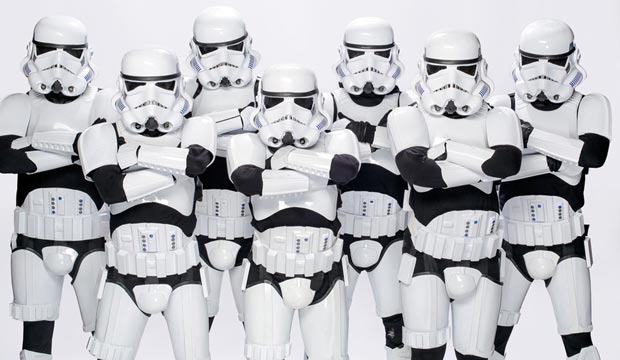 Simon Cowell has really gone over to the dark side now. At the start of the Monday, January 13 episode of “America’s Got Talent: The Champions,” the notoriously mean British judge broke the reality TV show’s rules when he gave a Golden Buzzer to dance group Boogie Storm, thereby stealing the power from the night’s designated judge, Howie Mandel. Unlike a normal “Got Talent” season when judges can press their Golden Buzzers in any order, “AGT: The Champions” has strict rules in place so that each judge (plus host Terry Crews) has to press their buzzer on a certain day. Needless to say, Simon’s impromptu decision sent shockwaves through the studio.

Boogie Storm came out on stage dressed as Storm Troopers from “Star Wars” and proceeded to dance to a selection of up-tempo songs including Ariana Grande‘s “Bang Bang,” Kelis‘ “Milkshake,” Kris Kross‘s “Jump” and The Offspring‘s “Pretty Fly (For a White Guy).” After their performance, Simon reminded his fellow judges that the dance group was his Golden Buzzer pick in “Britain’s Got Talent” Season 10, where they came in third place. The Storm Troopers returned in “Britain’s Got Talent: The Champions” Season 1 but failed to advance.

Simon urged Howie to push the Golden Buzzer for the dancers, but the Canadian-born judge responded, “It’s my choice. Sorry, guys.” Just as Heidi Klum sided with Howie, Simon did the unthinkable by jumping out of his chair and slamming his hand down on the Golden Buzzer.

Confusion and chaos followed, with Terry shouting, “Simon … just gave them the Golden Buzzer?!” Backstage, the remaining nine acts including Luke Islam, Marc Spelmann and Collabro stared at their TV monitors in shock. Was this really happening?

When Terry informed the crowd that Simon “stole” Howie’s Golden Buzzer, Simon calmly responded, “You know why I did it? Because I believe the dark side is the good side. These guys are one of the most original acts we’ve ever had. They have to be in the finals. They have to be.”

That’s when Howie joked, “You know what we just figured out? Simon Cowell is your father.”

Heidi said Boogie Storm’s performance was nothing but a “gimmick” and wondered how long they would actually last on the show. In fact, her favorite part of the entire act was watching Simon’s face because he looked like “a kid in a candy store.”