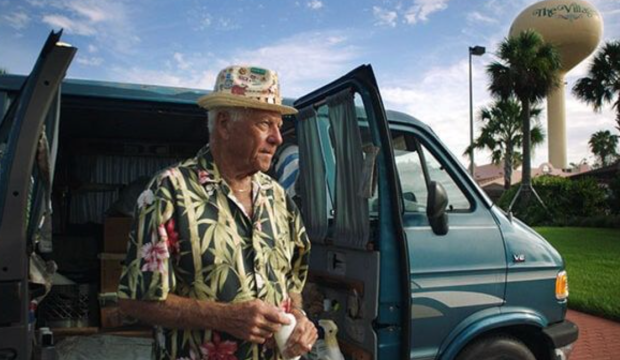 Following its world premiere at the Sundance Film Festival in January 2020, “Some Kind of Heaven,” a fascinating documentary about the largest retirement community in central Florida, is set for release in early 2021 courtesy of Magnolia Pictures. Making his feature directorial debut, Lance Oppenheim follows four residents of The Villages, known as the “Disneyland for Retirees,” as they seek new purpose, search for love and navigate mental deterioration within the confines of a palm tree-lined fantasy land.

While most of “the Villagers” seem to revel in the daily activities available to them, Barbara, a no-nonsense widow from Boston, remains skeptical and inserts a jolt of humor as she rolls her eyes in a tambourine class. She seems flabbergasted by the joy others exude from such menial hobbies, but as her story continues, Barbara’s demeanor transforms from hopeless to optimistic after she makes a connection with a local golf cart salesman. Dennis, an 81-year old hoping for his last hurrah, crashes The Villages in search of a rich woman to live with so he can move out of his van. Meanwhile, Anne and Reggie, a couple married for nearly five decades, struggle to find their footing as Reggie discovers a late-in-life fascination with illegal drugs.

As of this writing, “Some Kind of Heaven” holds a perfect 100% freshness rating on Rotten Tomatoes, putting the critically acclaimed documentary in Oscar contention. Dennis Harvey (Variety) says, “Those nostalgic for the fond portraits of eccentric Americana in Errol Morris‘ early work – and pretty much everyone else – will be delighted by ‘Some Kind of Heaven.'” Beandrea July (Hollywood Reporter) adds, “There’s a lot of dancing in this movie, and it turns out that watching old people dance in an authentic way is really enjoyable.”

“Some Kind of Heaven” was produced by Academy Award nominee Darren Aronofsky‘s (“The Black Swan”) Protozoa alongside “The New York Times” and the Los Angeles Media Fund. Magnolia President Eamonn Bowles said in a statement, “‘Some Kind of Heaven’ is a remarkable achievement from a striking new voice in film. Lance Oppenheim demonstrates an incredible command of his craft and, more importantly, a clear-eyed vision of the world around him. It also makes me want to learn pickleball.” Should Oppenheim earn his first Oscar nomination for this documentary, the 24-year old would become one of the youngest documentary filmmaker nominees ever.