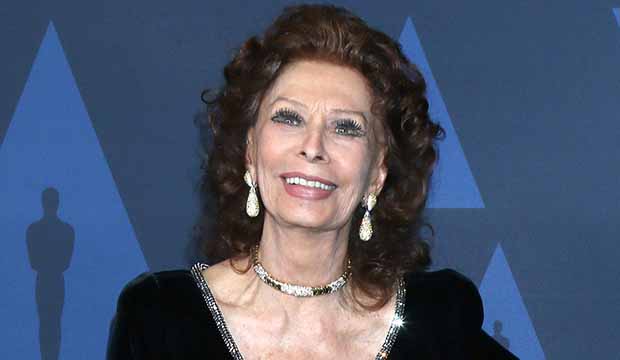 It is staggering to think that Sophia Loren has been making movies for 70 years, initially appearing uncredited in such films as 1950’s “Tototarzan” and “Quo Vadis” before becoming a full-fledged star in mentor Vittorio De Sica’s 1954 comedy anthology “The Gold of Naples.” And she became the first performer to win an Oscar for a foreign language film for De Sica’s harrowing World War II drama “Two Women,” which opened in the U.S. in 1961. She received two more Oscar nominations for Italian productions: DeSica’s “Marriage Italian Style” and Ettore Scala’s 1977 “A Special Day.”

After a decade’s hiatus from features, Loren has made a triumphant return to film in her son Edoardo Ponti’s poignant “The Life Ahead,” currently streaming on Netflix. The 86-year-old actress has received some of the strongest reviews of her career and loud Oscar buzz for her performance as an aged prostitute and Holocaust survivor who takes care of children of prostitutes in Naples.

Despite her success in Italian films, most know Loren for her numerous English-language films. In fact, Hollywood came knocking on her door after “The Gold of Naples.” “America has always accepted me, even in the beginning when I came here for the first time,” she recalled when I interviewed her for the L.A. Times in 2011. “I was very young, and they gave me this wonderful cocktail party. Louella Parsons and Elsa Maxwell and Jayne Mansfield were there. I will never forget those days. For me, Hollywood was a fairy tale, coming from where I came from, a little town. It was something that I never expected.”

Audiences first saw her in the torpid 1957 “Boy on a Dolphin,” in which Loren was poor sponge diver on Hydra with a rather lazy boyfriend who, doing one of her excursions, finds an historical statue. Alan Ladd and Clifton Webb also star in the film which made Loren an international star and is best known for her diving outfit which left little to the imagination Her other two 1957 vehicles were the rare Stanley Kramer misfire “The Pride and the Passion,” starring Cary Grant, who pursued Loren during the production,  and “Legend of the Lost,” a ho-hum John Wayne action-adventure shot in Libya.

Paramount signed her to a contract and cast her in 1958’s “Desire Under the Elms,” an adaptation of Eugene O’Neill’s controversial 1924 Oedipal tragedy starring Burl Ives and Anthony Perkins. Loren told me in 2011 that “Desire” was a “very dramatic movie with Burl Ives, a beautiful actor. I had a wonderful relationship with him. The drama was a little bit like what we had in Italy. It was a very strong drama and for me at that age, I was overwhelmed by doing it, but still interested in trying.”

She scored a big hit with her second Paramount production that year, the romantic comedy “Houseboat,” which reunited her with Grant. Jack Rose and director Melville Shavelson received an Oscar nomination for best story and screenplay for this fun flick in which Grant plays a widower with three children who moves the brood to a rundown houseboat. Loren is the Italian woman he hires to be their housekeeper. Of course, love is just around the corner.

Shavelson also directed her in the charming 1960 romantic comedy “It Started in Naples,” which cast her opposite Clark Gable in his penultimate film. He plays a lawyer who travels to Naples to settle his late brother’s affairs there. He finds out that his brother left an eight-year-old son who lives with her nightclub performer aunt (Loren). She’s not quite the typical aunt because his nephew drinks, smokes and acts like a diminutive John Cassavetes. A custody battle ensues, only to have Gable, of course, fall in love with Loren. The thing about Clark Gable,  she told me in a 2008 L.A. Times interview, was his watch. “He was always looking at the watch when it came to 4 or 4:30 in the afternoon. Even if it was in the middle of a scene at 5, I could hear the alarm going off and he would leave the set. We were flabbergasted. What? But it was in his contract.”

Loren found Paul Newman a nice person, “but shy and very much in love with his wife Joanne Woodward who was very pregnant and always on the set” when the two made Peter Ustinov’s 1966 comedy “Lady L.”  “I was always amazed that each time I looked at him, I would say to myself ‘My God, I’m working with Paul Newman,”’ Loren noted. “’God, look at his eyes, look at his mouth. He is so handsome.’ I don’t know when he was looking at me what he thought, but anyway, I was absolutely amazed.”

Though Charlie Chaplin’s final film, 1967’s “A Countess from Hong Kong” wasn’t da bomb, but rather a bomb, Loren loved working with the legend. “Charlie Chaplin wanted me because he saw a picture I did with De Sica, maybe it was ‘Gold of Naples’ and he said, ‘I want this girl.’ He would have given me the telephone book and I would have done it anyway. He was like a director of an orchestra with me. He would just tell me behind the camera in the emotional scenes [with his hands] to give more or give less.” Her leading man, Marlon Brando, was another story. “He had his own problems, and if your problems interfere with the whole crew, it’s going to be a little bit more difficult. For Charlie, it was a little bit difficult.”