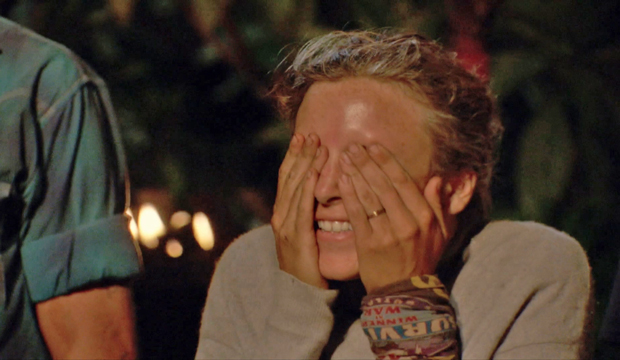 “I’m sad!” Sophie Clarke exclaimed when she arrived at the Edge of Extinction following her shocking elimination during Wednesday’s “Survivor” episode. In her end-of-show interview, she declared, “I’ve never been blindsided before. I think it’s a traumatic experience. I played as best as I could and it’s a bummer to go out with an idol in your pocket. I probably came into this game feeling like I was a bottom tier winner and it’s been fun realizing that I can hold my own.”

Well, Sophie, we have news for you. “Survivor” fans not only considered you a top tier champion, they also thought you were one of the most deserving to claim the $2 million prize on “Winners at War.” In our recent poll, 13% of viewers said they were rooting for Sophie to win, just behind Tony Vlachos and “someone from Edge of Extinction,” two options that tied at 21% support. Sophie also topped Gold Derby’s winner odds week after week in our ongoing predictions game.

Sophie became the 13th person voted out of “Survivor: Winners at War” on Day 28. (See the updated bootlist.) This winner of “South Pacific” was eliminated by the Koru tribe in a 4-3-2 vote over Jeremy Collins and Michele Fitzgerald. Despite her quiet domination of the game (plus a hidden immunity idol in her pocket), Sophie failed to recognize she was a target in Tony’s eyes and she was blindsided when he pulled in a small group to take her out.

“I don’t know how I do this,” Sophie noted at tribal council after Jeff Probst read the votes. She sloppily grabbed her torch and dropped it into the hole in front of the voting podium, adding, “I’m bad at this. Good job, guys. Did not see it coming.” After taking “the idol out of [her] crotch,” Sophie bequeathed her two fire tokens to two allies who didn’t betray her: Sarah Lacina and Kim Spradlin Wolfe. Can they now avenge her ruthless blindside?