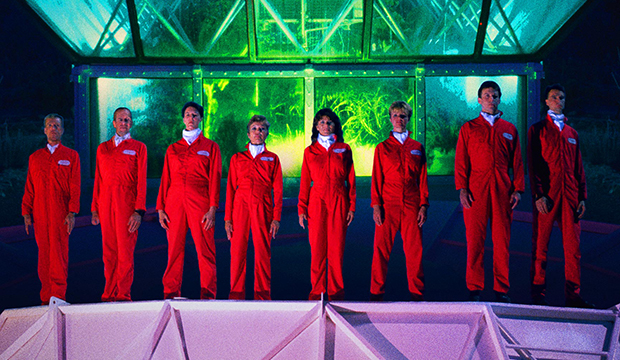 One of the big documentaries from the Sundance Film Festival is now jockeying for a slot in the Oscar race for Best Documentary Feature. “Spaceship Earth” premiered to rave reviews in January and was acquired by Neon, which released it in May. The film from Matt Wolf is now currently available to stream on Hulu.

“Spaceship Earth” looks back at the private semi-scientific experiment called Biosphere 2. The experiment was a three-acre structure that housed a closed ecological system and would also house eight researchers for a period of two years as they run experiments meant to test whether these systems could be maintained for the purposes of space colonization. As the first group of researchers were in their two-year stint inside Biosphere 2 (between 1991 and 1993), the spectacle received a lot of media coverage. While some of it was, indeed, positive, other coverage was much more critical of what was going on, with some questioning the scientific merits of what they were conducting and others alleging that the parent company that oversaw Biosphere 2 has cult-like tendencies.

The film is surprisingly captivating. Part of what makes it so fascinating is that the film doesn’t delve into the actual accounts of the researchers being housed together until the second half. The first half focuses on the group of people who first connected in 1966 in San Francisco to form the Theater of All Possibilities theater group, which included John Allen and Margret Augustine, who would go to start the Institute of Ecotechnics. Watching them go from what was a form of a commune to their own research charity is fascinating and helps us to understand some of the accusations that would be leveled against them in the future. Even knowing that their research doesn’t match up to some scientific standards (such as being able to run the research again), you can’t help but root for their mission to be as successful as possible, as the situation that our planet currently faces becomes more dire by the moment.

The reception for the movie has been extremely positive since its premiere. The film currently has an 87 percent fresh rating at Rotten Tomatoes and a score of 73 out of 100 on Metacritic. Justin Chang at the Los Angeles Times wrote, “Matt Wolf’s layered, absorbing and sympathetic new documentary, is as a madly inventive primer on responsible dystopian-hermetic living. But the film… would make for fascinating viewing under any circumstances.” Ann Hornaday of The Washington Post said, “Suffice it to say that, in addition to celebrating the energy, enterprise and idealism of America’s postwar generation, ‘Spaceship Earth’ provides a sobering primer in how some dreams die, and others are strangled mercilessly in their cribs.” And at the Associated Press, Jake Coyle wrote that the film “doesn’t cast judgment on most of its subjects. It’s content to go along for the ride, marveling at all the surrealism. You’d say the story was out of this world if it wasn’t so much of it.”