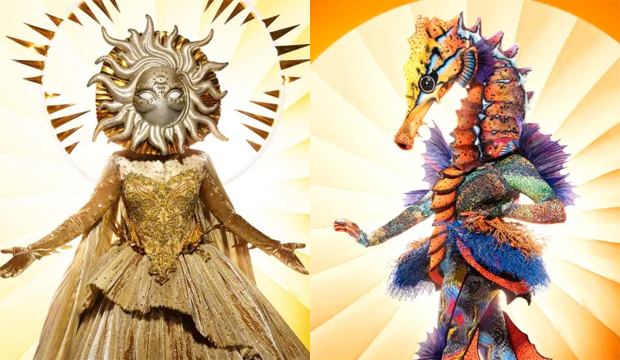 After two performances apiece, we have our first pair of front-runners to win “The Masked Singer” Season 4, according to Gold Derby’s predictions. Group A’s Sun currently leads with 10/1 odds, followed by Group B’s Seahorse in second place with 11/1 odds. It’s no surprise to see the divas at the top of our winner’s chart — after all, judges Robin Thicke, Jenny McCarthy, Ken Jeong and Nicole Scherzinger have repeatedly praised their performances as the best. Do you agree that Sun and Seahorse are the ones to beat?

So far on Fox’s wild and wacky reality TV show, Sun shined while taking on “Cuz I Love You” by Lizzo and “Praying” by Kesha. Nicole said that Sun “topped” all other opening acts when she kicked off the premiere, then later declared she gave her “favorite female vocal” in the show’s history — take that, Night Angel! Among the judges’ top guesses for Sun are Katharine McPhee, Demi Lovato, Madonna, Carrie Underwood and Mandy Moore.

As for Seahorse, this multi-colored water creature performed “Only Girl (In the World)” by Rihanna and “My Heart Will Go On” by Celine Dion. “The Sun don’t shine where the Seahorse swims,” joked Robin after Seahorse’s debut performance. Nicole echoed that by claiming, “We might be looking at the winner of Season 4 right now.” Some of the panelists’ guesses for Seahorse are Halsey, Hailee Steinfeld, Bebe Rexha, Camila Cabello and Jessica Simpson.

SEEWhen does ‘The Masked Singer’ return after the World Series?

While Sun and Seahorse are the odds-on front-runners to take home the Golden Mask, there are still five unseen costumes from Group C to consider as well. Broccoli, Jellyfish, Lips, Mushroom and Squiggly Monster will take the stage after Fox’s broadcast of the World Series, so the jury is still out on how they might ultimately fare against the predicted winners.

Here’s a closer look at the five artists most likely to win “The Masked Singer” Season 4: