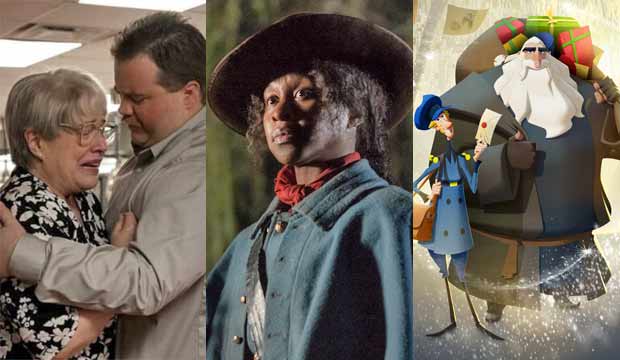 There are 124 total Oscar nominees across 24 categories, and Gold Derby’s official racetrack odds correctly predicted 96 of them (77% accuracy). That’s a pretty good rate of accuracy, not far behind last year (79%) or the year before that (80%). But it still means that we got it wrong 28 times. Scroll down to see the nominees we goofed by not predicting, and check out the complete list of nominations here.

Our odds were calculated by combining the predictions of more than 10,000 registered Gold Derby users, and to our credit, there were only four nominees that took us so by surprise that we gave them distant odds of 100/1: “Toy Story 4” for Best Original Song (“I Can’t Let You Throw Yourself Away” by Randy Newman), “The Edge of Democracy” for Best Documentary Feature, “Memorable” for Best Animated Short” and “Saria” for Best Live Action Short.

There were many other close calls that some of us saw coming, but not enough to rank them among our top five predicted nominees in those categories. That includes one nominee in every acting race. We thought Jonathan Pryce and Anthony Hopkins would narrowly miss out on nominations for playing the title pontiffs in “The Two Popes,” but they earned nominations for Best Actor and Best Supporting Actor anyway.

Cynthia Erivo was on the bubble for Best Actress for playing Underground Railroad conductor Harriet Tubman in “Harriet,” but she made the cut — twice! In addition to her acting nomination, she’s also up for Best Original Song for co-writing “Stand Up” for the film, which makes her the third woman in as many years to earn dual nominations for acting and songwriting. Mary J. Blige did it for “Mudbound” (2017), and Lady Gaga did it for “A Star is Born” (2018).

Erivo also kept the Oscars from avoiding a complete shutout of actors of color — barely. The academy skunked all Asian actors (no performers from “Parasite” or “The Farewell”) and all other black and Latin-American performers (no Jennifer Lopez, Eddie Murphy, Lupita Nyong’o, Alfre Woodard or Jamie Foxx).

But the most surprising acting nominee was Kathy Bates (“Richard Jewell”), who didn’t get 100/1 odds, but almost did. We gave her 95/1 odds for Best Supporting Actress after she earned a nomination at the Golden Globes but missed out at the SAG Awards (where she was mistakenly submitted as a lead actress) and the BAFTAs.

See who else earned nominations we weren’t expecting below. How many of these contenders did you see coming?

BIG SURPRISES
These contenders made the cut despite getting distant odds of 100/1.

CLOSE CALLS
We knew these contenders had a shut, but they weren’t among our top five predicted nominees.

Best Original Song
“I’m Standing with You” from “Breakthrough”

Best Sound Editing
“Joker”
“Once Upon a Time in Hollywood”