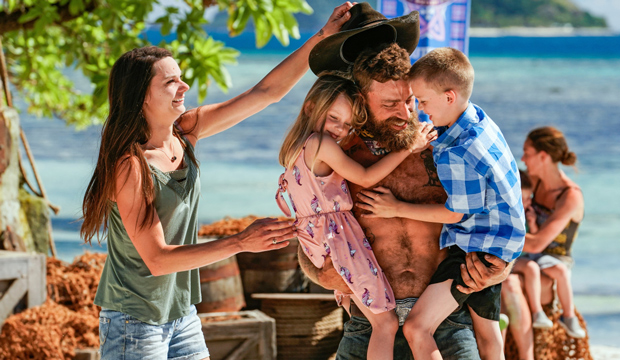 And then there were 10. After weeks of epic challenges, jaw-dropping blindsides and fire token drama, “Survivor: Winners at War” took a break from the cutthroat competition this week to reunite the remaining castaways with their loved ones. We hope you had your tissues handy as Tyson Apostol, Sophie Clarke, Jeremy Collins, Ben Driebergen, Michele Fitzgerald, Sarah Lacina, Kim Spradlin-Wolfe, Denise Stapley, Tony Vlachos and Nick Wilson hugged and kissed their spouses, significant others, children, etc. After all was said and done, who had their torch snuffed by host Jeff Probst?

Below, read our minute-by-minute “Survivor: Winners at War” recap of Season 40, Episode 10, titled “The Full Circle,” to find out what happened Wednesday, April 15 at 8:00 p.m. ET/PT. Then be sure to sound off in the comments section about your favorite castaways on CBS’s reality TV show, who currently holds immunity idols and fire tokens, and who you think will ultimately join the “Survivor” winners list.

7:59 p.m. – “Previously on ‘Survivor’!” In last week’s ninth episode, Adam Klein‘s time on the island came to an end after he memorably thought the fleur-de-lis on Jeff’s podium was actually a hidden immunity idol (it wasn’t). Adam then went to the Edge of Extinction, where he readily admitted he “made one too many mistakes.” Who will be joining Adam at Extinction Island later tonight? Let’s go!

8:14 p.m. – But instead of having a challenge, Jeff dropped a bomb on everyone and sent the entire group back to camp for the biggest family visit reward in series history. Yay?

8:18 p.m. – Back at the family-full camp, Ben and Sarah both reflected on the pause in the game that allowed them all to not have to worry about the strategy of the game and instead bond on a human level with their families and with each other. But the goodwill didn’t entirely stop there, off the coast of the Edge of Extinction a boat was seen with the loved ones for all of them as well!

8:27 p.m. – Our first moment of action in the episode came when the players rejoined Jeff for the immunity challenge. They each had to balance a wobbling table with a rope where they’d stack blocks to spell “immunity” without letting them fall. In addition to immunity, the winner would receive two fire tokens. Jeff pointed out that Michele and Sarah have competed in the challenge in previous seasons–one lasting over an hour and the other lasting only 14 minutes.

8:30 p.m. – Tony and Kim jumped out to an early lead with Tyson, Nick, Ben and Jeremy trailing by just about a block. Of all the players, Jeremy was moving the quickest, which eventually led him to drop his stack and start over. In the lead and moving slowly, Kim was the next to drop, leaving Tony with a comfortable lead over Tyson, Nick and Ben. At that point Tyson was the next to drop just as Jeremy and Nick also dropped, leaving Ben the only challenger to Tony’s lead as he returned for his final block. On their final stretch, Ben started moving more quickly to catch up to Tony and dropped his stack, giving him enough room to make it to the end without ever dropping and winning his first ever individual immunity!

8:39 p.m. – Back at camp, Tony was excited to be in the safe position where other players would come to him trying to make plans for the vote. Jeremy was the first to approach him, throwing out the idea of breaking up Sarah and Sophie. Tony shot that down immediately, I think because he’s interested in protecting Sarah, and that left Jeremy frustrated that he didn’t have a voice in the game. Later, Tony went to Sarah who wanted to get rid of Kim and Tony shot that down as well, leaving even Sarah frustrated! Eventually Sarah got him to see her way and asked him to “touch base with the boys.”

8:41 p.m. – Meanwhile the boys were thinking about blindsiding Jeremy, saying that he was doing “too much protecting” of other players and for always going against the grain. Elsewhere, Jeremy, Tyson and Kim decided to stick together, knowing that they were all on the outs. Kim told them that she’s ready to play with them all the way to the end, confessing to them that she has an idol and throwing out Sophie as the one to vote out. She also told Denise about it, saying that she’d be willing to play it for someone else if they’re the ones catching votes.

8:43 p.m. – Later, Tony told Sarah that Jeremy was throwing her name out there and convinced her to vote Jeremy out with the rest of the group. But Jeremy was already tossing around the idea of using his advantage that allows him to leave tribal council, saving himself and leaving his alliance without his vote. Sarah was also considering using her steal a vote in order to give their side the majority. Oh, good. Some tribal madness is incoming!

8:49 p.m. – Immediately into tribal the whispering started, making for yet another tribal council where Jeff doesn’t even get to focus on asking questions because the players are more interested in buzzing around to make last minute deals.

8:51 p.m. – After all the whispering, there wasn’t much left to be said except Jeremy and Sarah arguing over who played their advantage before voting. In the end, Sarah said she wouldn’t say anything and then Jeremy decided to use his advantage to leave tribal council completely. With the advantage he can’t be voted out and does not get to vote, in “safety without power.” That set more scrambling off, but Sophie spoke up to have her, Sarah, Tony, Ben and Nick all step away to make a decision in private, but before voting Sarah did play her advantage to steal Denise’s vote and vote twice!

8:55 p.m. – With the votes cast and so much at stake, Kim decided to play her hidden idol for Denise! Jeff read the votes: Denise, Denise, Sophie, Sophie, Tyson, Tyson, Tyson, Tyson! Wowza. What a tribal and some really smart play from, I think, Sophie and Sarah! Winners? Bank on it.

NEXT TIME: Tony’s finally in the hot seat, called a “double agent” by both sides and planning a blindside of his own.

Here are the answers to Gold Derby’s contest questions for “Survivor” 40, Episode 10:

Who will be voted out at tribal council? Tyson Apostol

Who will win Immunity? Tony Vlachos