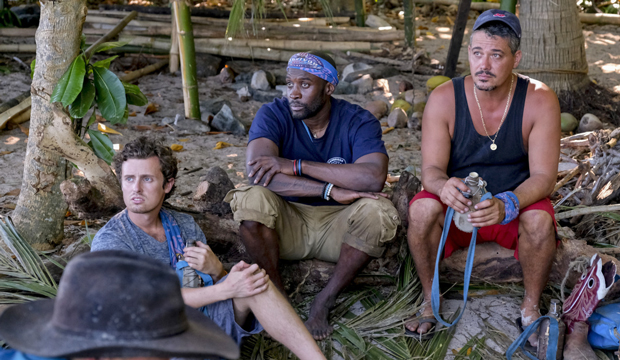 After last week’s epic Season 40 premiere of “Survivor: Winners at War,” the Sele and Dakal tribes were even at nine members apiece. While it was sad to see Natalie Anderson and Amber Mariano voted out so soon, their journeys weren’t over just yet as they’re now living on the Edge of Extinction with the hopes of one day returning to the game. During Wednesday’s second episode all eyes were on Rob Mariano as he found out his wife had been voted out. Did he blame one-time ally Sandra Diaz-Twine for Amber’s early ouster?

Below, read our minute-by-minute “Survivor: Winners at War” recap of Season 40, Episode 2, titled “It’s Like a Survivor Economy,” to find out what happened Wednesday, February 19 at 8:00 p.m. ET/PT. Then be sure to sound off in the comments section about your favorite castaways on CBS’s reality TV show, who currently holds immunity idols and fire tokens, and who you think will ultimately join the “Survivor” winners list.

8:00 p.m. — “Previously on ‘Survivor’!” The season began with a special two-hour episode that welcomed back 20 of your favorite winners of all time. No one ever wants to be the first person voted out, but that’s especially true this season as the winners are way more cutthroat than your usual cast. Natalie ended up being ousted from the blue Sele tribe while Amber felt the sting of betrayal from the red Dakal tribe. Who will be next to have their torch snuffed by Jeff Probst and sent to the Edge of Extinction? Let’s find out!

8:01 p.m. — The morning after Amber’s boot, Rob received the gift of her fire token, the first sign to him that she’d been voted out. He confided in Parvati Shallow that he received the token and together they speculated that Sandra might have been responsible for it.

8:02 p.m. — Ben Driebergen was interested in building a better social game resume this time around, after his time on his original season was dominated by winning immunities and finding idols. While building on a bond with Denise Stapley the two of them found a hidden idol that would require Denise to bequeath half of it to another player in order for it to be activated. She chose to disclose the find to Adam Klein with the idea to give the other half to Parvati in order to build trust with her, but Adam talked her out of that and into giving it to him. He was, however, nervous of playing the game alongside Ben.

8:06 p.m. — Over on Dakal, Kim Spradlin felt like she was on the bottom and so she, too, went idol hunting. Sure enough, she also found an idol that must be split in half and just as she did Tony Vlachos and Nick Wilson approached, but didn’t seem to notice. Later, she pulled Sophie Clarke aside and offered the second half to her. Sophie was surprised because she thought she’d share it with Tyson Apostol, telling us to the camera that Kim should be worried now.

8:12 p.m. — Back on EoE, Amber and Natalie received another clue to an additional advantage. Because of the advantage she found prior to Amber’s arrival, Natalie knew that it was likely another bargaining tool in order to earn a token. After a long search, Natalie looked in the water well and there she found the advantage. This time she found an advantage for a player in the game to leave tribal council before a vote (a different kind of immunity) that she’d have to offer someone in exchange for a fire token. At Sele, we saw Jeremy Collins receive that offer who immediately knew that it was from Natalie. He called it a “no brainer” and bought the advantage.

8:19 p.m. — At Dakal, Sarah Lacina had a conversation with Tony about how cautious they have to be about seeming like a pair, but they vowed to work together for real this time as “Cops R Us.”

8:23 p.m. — At the challenge, Rob learned for certain that Amber had been voted out and though he gave the other tribe a death stare he said “it’s a game.” The challenge was for immunity, requiring the tribe to work together on an obstacle course carrying a heavy cart where at the end they’d assemble a giant circle puzzle. They were also playing for the reward of a spice kit for their camp.

8:27 p.m. — Through the first two obstacles, Dakal had a slight lead over Sele, but used the third and fourth to strengthen their lead, giving Sophie and Sandra a huge head start on the puzzle. By the time Rob and Denise started the puzzle, Dakal was through their first section, but they assembled the first section very quickly and got up to even things out. But then Rob made the decision to organize their pieces instead of working on assembling them, making way for Sophie and Sandra to completely pull away and finish their puzzle in what became a blowout win for Dakal!

8:36 p.m. — At Sele, Rob took ownership over the tribe’s loss and with humor his tribe mates gave him crap for it, but none of it stopped Rob from feeling safe. He contemplated with “new school” player should go home, tossing between both Jeremy and Ben. While he, Parvati and Ethan Zohn discussed those options, Danni Boatwright noticed that she was being left out and so it made her feel worried. Danni took that concern to Ethan and Ben, mentioning the “old school strong” conversation which was not something she should have said in front of Ben.

8:38 p.m. — Ben used that information as ammunition to make a plan with Jeremy, Adam and Ethan in order to take Rob out together to prove that there’s no division between old and new schools. Elsewhere, Danni optioned Parvati to Rob as the next boot, but that was not to Rob’s liking so he started throwing Danni’s name on the table instead.

8:41 p.m. — When Parvati heard that Danni was throwing her name under the bus, she was surprised, but still discussed whether or not Ben was the bigger threat to them. Through all this, Jeremy was still very clear on the fact that Rob was controlling the game and so he, Adam and Michele Fitzgerald considered whether they should let them vote Danni out or if they should go after Parvati themselves instead. For Adam, he knows that in order to win against winners he’d need to make big moves and so Parvati seemed like a good way of achieving that right off the bat.

8:49 p.m. — At tribal council, everyone agreed that reading people in this game was extremely complicated because of all the intricate relationships between all the players. There’s also still a mystery of how important new/old school alliances were playing out and to what extent idols and advantages would impact things. The division between Danni and Parvati got highlighted and so Ben found an entrance to discuss how there clearly is an new/old school thing going on. He threw Rob, Ethan and Parvati all under the bus, pitting them all squarely against him with accusations of paranoia going around. During this (Ben continuing to rant), Rob whispered to Jeremy, Parvati whispered to Danni and then Rob whispered to Ethan. Ultimately, Ben causing a lot of havoc which turned into Rob asking everyone to dump out their bags to prove who has an idol. Denise was able to hide hers, but not before Adam threw a fit about why this was even happening.

NEXT TIME: Adam and Denise put the target on Rob and Parvati’s back and Dakal is in high spirits on the hunt for food.

Here are the answers to Gold Derby’s contest questions for “Survivor” 40, Episode 2:

Who will be voted out at tribal council? Danni Boatwright

Who will win Reward? Dakal

Who will win Immunity? Dakal