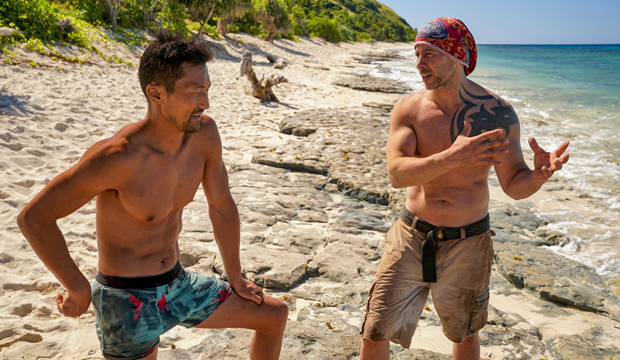 After three eliminations on “Survivor: Winners at War,” the red Dakal tribe had a slight nine-to-eight numbers advantage over their blue Sele counterparts. Heading into Wednesday’s episode, Gold Derby readers predicted that the castaways most in danger of being voted out next were Ben Driebergen of Sele and Tyson Apostol of Dakal. Did their predictions come true? And which Edge of Extinction inhabitant found this week’s all-important advantage that they sold to a player still in the game?

SEEDanni Boatwright (‘Survivor 40’): ‘I still have life in this game’ despite being bested by Parvati Shallow

Below, read our minute-by-minute “Survivor: Winners at War” recap of Season 40, Episode 3, titled “Out For Blood,” to find out what happened Wednesday, February 26 at 8:00 p.m. ET/PT. Then be sure to sound off in the comments section about your favorite castaways on CBS’s reality TV show, who currently holds immunity idols and fire tokens, and who you think will ultimately join the “Survivor” winners list.

8:00 p.m. – “Previously on ‘Survivor’!” In last week’s second episode, Danni Boatwright‘s torch was snuffed by Jeff Probst when she dared to cross paths with Parvati Shallow. That made Danni the third member of Extinction Island, following Natalie Anderson and Amber Mariano. Will tonight’s fourth castoff be yet another woman, or will a tribe finally vote out a man in Season 40? Let’s find out!

8:01 p.m. – The morning after the Sele vote, Adam Klein felt like that game — certainly their tribe — was being run by Rob Mariano and the other old schoolers, Parvati and Ethan Zohn. He pulled his closest ally Denise Stapley aside to discuss the idea of voting Parvati out next in order to weaken them while also keeping Rob and Ethan close to them. In addition, Denise confirmed that Adam gave her his half of the split idol back so that she holds a working full idol for herself.

8:03 p.m. – Later, Adam and Ethan confirmed their own alliance to each other with Adam telling Ethan that he wants to vote Parvati out next, hoping that he’d keep the trust. Ethan was shocked he confessed that to him considering his own true #1 is Parvati.

8:05 p.m. – Over at Dakal, Sandra Diaz-Twine was focused on building a new reputation for herself–this time as a provider! She was working on her fishing skills while Tyson was busy plotting against her as the only two-time winner among them. He talked that through with Yul Kwon and Sophie Clarke who seemed at least initially on board with the concept.

8:07 p.m. – After Sandra successfully caught a shark in her net, Yul second guessed allowing Tyson to vote her out and so he let Sandra in on Tyson’s plan. That set in motion a Sandra vs. Tyson death match that we might see play out tonight. One can hope!

8:11 p.m. – At Edge of Extinction, Danni spear-fished for the first time and proved pretty good at it! That small success was a bright spot for her, giving her hope that she could make it through the rest of the game. When the women got another clue for the advantage, it led them to a number puzzle. But at one point Natalie and Danni looked up and Amber was gone–she’d left to go check out some numbers she’d seen on things around camp. Back at the puzzle, Natalie realized that the clue was actually directing them toward a shell necklace and that groupings of shells in sequence that matched the numbers on the puzzle. That was it — and inside the puzzle was Natalie’s third advantage. For one fire token, she could sell a vote stealing advantage to someone in the game.

8:16 p.m. – Back at Dakal, Sarah Lacina received Natalie’s advantage option. She bought it, but it also required her to sneak out of her own camp at night in order to get the advantage tied into one of that tribe’s torches. Unsure that she could accomplish it on her own, Sarah employed Tony to help prepare her for the sneak. At the Sele camp, Sarah crawled around their camp in the dark and eventually found the advantage in the top of one of the torches without waking anyone up!

8:27 p.m. – For this week’s challenge the tribes ran an obstacle course as a team including ramp walls, a rope tower and a tree puzzle. The challenge was for immunity as well as a grill lunch to the winners. With one extra member, Dakal chose to sit Sandra out for the second time.

8:28 p.m. – In the challenge, Dakal got out to an early lead through the first two stages, but Sele managed to catch up by the fourth obstacle, but then fell behind again when Rob and Ben both struggled to complete a ball toss. For the puzzle, Dakal had Sophie and Sarah assemble. Once they reached it, Sele had Michele Fitzgerald and Rob on the puzzle. Eventually, the tribes were evenly matched on the puzzle, trading the lead back and forth for a while before Sophie and Sarah had a breakthrough and won for Dakal just one piece ahead of Sele!

8:39 p.m. – After the loss, spirits were low at Sele with everyone in a “stand off” between the new and old school players, waiting to see which side was going to start the scrambling first. Because they’re all winners they know the danger of openly strategizing. Eventually Denise, Ben and Jeremy got away to discuss breaking up the old schoolers, singling Paravti out as the most dangerous.

8:41 p.m. – Later, Rob and Adam met to discuss all of the possibilities, where Adam tossed out Parvati’s name despite him knowing that it was dangerous to give Rob that kind of information. In Adam’s mind, Rob is someone he wants to work with going forward so he thought telling the truth was a good idea. But he should have known better because Rob immediately went to Jeremy and Michele to discuss and so the three of them discussed potentially going after Adam instead.

8:43 p.m. – But then Michele and Jeremy touched based on their own, knowing that Rob, Ethan and Parvati are such a strong trio, but they were equally pissed off at Adam throwing them all under the bus by sharing secrets with Rob. Michele told Denise and Ben about Adam’s big mouth, putting her and Jeremy in the power position of swinging between the two alliances.

8:50 p.m. – At tribal, it was clear that the tribe was divided and that they were concerned with their losing streak. The consensus was that the losing streak causes them to turn to their own goals and going by their guts in terms of who to align with. Parvati openly said that she knows she’s a target this time around and that she’s one of the biggest in the game and it makes it hard for her to find people to work with.

NEXT TIME: Jeremy and Michele get really sick of Adam playing both sides, it’s still Tyson vs. Sandra at Dakal and there might be an emergency on Edge of Extinction.

Here are the answers to Gold Derby’s contest questions for “Survivor” 40, Episode 3:

Who will be voted out at tribal council? Ethan Zohn

Who will win Reward? Dakal

Who will win Immunity? Dakal