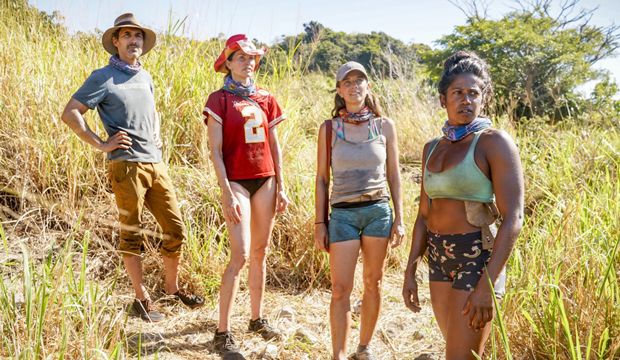 Last week “Survivor” nation was heartbroken when Ethan Zohn was voted out of the game and sent to the Edge of Extinction, where he joined up with Natalie Anderson, Amber Mariano and Danni Boatwright. Heading into Wednesday’s fourth episode, Gold Derby readers predicted that the castaways most in danger of being voted out next were Tyson Apostol of Dakal and Adam Klein of Sele. Did their “Winners at War” predictions come true? And which Extinction Island inhabitant found this week’s all-important advantage that they sold to a player still in the game?

SEEEthan Zohn (‘Survivor’ 40) exit interview: Edge of Extinction is nothing like ‘having to go through cancer’

Below, read our minute-by-minute “Survivor: Winners at War” recap of Season 40, Episode 4, titled “I Like Revenge,” to find out what happened Wednesday, March 4 at 8:00 p.m. ET/PT. Then be sure to sound off in the comments section about your favorite castaways on CBS’s reality TV show, who currently holds immunity idols and fire tokens, and who you think will ultimately join the “Survivor” winners list.

8:00 p.m. – “Previously on ‘Survivor’!” In last week’s third episode, Adam’s “new school” alliance of Jeremy Collins, Ben Driebergen, Michele Fitzgerald and Denise Stapley knew they had to split up the “old school” trio of Ethan, Rob Mariano and Parvati Shallow. At first the plan was to oust Parvati, but when Adam foolishly spilled the beans to Rob, the so-called “Survivor Godfather” blew up his game. Thus, instead of eliminating Parvati, the “new school” group (minus Adam) all voted for Ethan instead. Who will be the next castaway to have their torch snuffed by Jeff Probst? Let’s find out!

8:01 p.m. – Ethan’s elimination had a ripple effect immediately at Sele, mostly for Adam who was left out of the vote plan by the people he is closest to in the game. Ben and Michele made it clear to him that playing both sides is not okay and so Adam went on an “apology tour” among the “new school” players to promise that he won’t play with Rob and Parvati at all.

8:02 p.m. – Meanwhile at Dakal, Yul Kwon was cognizant of their fortune to have not gone to tribal council as often as the other tribe. He also confirmed that he, Sophie Clarke, Nick Wilson and Wendell Holland are still a tight four alliance that no one else knows about.

8:04 p.m. – On Edge of Extinction island, the four castaways were tasked with a challenge of 20 trips up and down the mountain with a log in hand before sundown in order to win a fire token. Ethan, Danni and Amber were all surprised at how impressive Natalie was in this challenge, attributing it to her job as a crossfit trainer while Natalie said she was just determined to be as greedy as possible with the acquisition of fire tokens. Of everyone, Ethan had the toughest time both physically and mentally. Eventually medical had to arrive to take his blood pressure and it was confirmed that even with only four more trips to make his 20, Ethan had to take it easier, take more rests and listen to his body if he wanted to finish. In the end, Natalie was the first to finish, Amber the second, Danni the third and, crawling up the stairs on hands and knees, reminding himself of his battle with cancer and getting through that, Ethan finished his last leg, too, this time with the support and company of the three women!

8:16 p.m. – At Sele, Rob and Michele swapped stories about home life, including Michele opening up about her “controversial” win. Rob told her that “if you win, you win.” — and that’s a lesson all of them in the game, but all of us fans should accept! All types of wins are valid! Elsewhere, Parvati and Rob were concerned with their place on the bottom of the tribe, having to figure out what avenues they have to get back into a power position. Rob’s idea was to throw Adam under the bus by telling Jeremy and Michele that Adam continues to try to strategize him — a blatant lie. Don’t mess with The Godfather!

8:19 p.m. – At Dakal, Sarah Lacina was conscious of the fact that most people aren’t trusting of Tyson, but she was “meshing” with him and felt like he was someone she could rely on. From Tyson’s perspective, the game felt “eerily calm,” which is typically a sign that you’re being left out of the conversations. He was able to clock the power of Yul’s power alliance and pinpointed that it was based on all of them not having connections to other players in the game. Knowing she was already a target of his, Sandra Diaz-Twine loved hearing this because it put her in a position to put the target on him instead.

8:25 p.m. – For the Day 11 challenge, Jeff offered the winning tribe immunity if they won a swimming, water jumping and puzzle competition, adding a crate of chickens as reward. Once again, Sandra sat out for Dakal, joined by Tony Vlachos since they had two more players than Sele. Dakal was able to get all of their keys on the water jump first while Adam, Denise and Parvati struggled to help their tribe out. On the puzzle, Nick and Sarah took their time working through that final stage as Jeff reminded everyone how important it is to put the right people in the right positions in the challenges. Eventually Adam claimed their third and final key, advancing Rob and Michele to assemble the puzzle for Sele where they quickly caught up as Dakal began to panic. In an epic turn around, Rob and Michele were complete stars and earned the win to protect Sele!

8:39 p.m. – After losing Tyson knew that he could use Nick failing on the puzzle as ammunition to get others to target him for the vote. To his face everyone told Tyson that they were down to vote Nick with him. Later, Wendell took it upon himself to go to everyone and point out how dangerous Tyson is because of his reputation and his connections with people on the other tribe.

8:42 p.m. – Tony was concerned with keeping “shields” in the game, meaning he wanted bigger targets around so that his name wasn’t at the top of everyone’s lists. Because of that he tried working Sarah and Kim Spradlin-Wolfe to vote out Nick with him and Tyson, but they knew that everything hinged on Sandra voting with them. Unfortunately Sandra had a vendetta against Tyson brewing underneath the surface, but his point of keeping big targets in the game made sense to her.

8:50 p.m. – At tribal, Jeff was interested in Yul’s comment that they each had a desire to not reveal who they’re really working with through their votes. And in order to do that they’d need to all be on the same page. Jeff also wanted some of the newer players to address the idea of “idolatry,” being starstruck by the older players that they grew up watching. Tyson differed from Sophie and Kim when he said that the “other side” of idolatry is wanting to be the person to take down your idol.

8:55 p.m. – Once the votes were cast and no one opted to play an idol, Jeff read the votes: Nick, Kim, Tyson, Tyson, Tyson, Tyson, Tyson. And so it looks like the tribe agreed to vote Tyson out, with Nick protecting himself in the case of an idol with a vote for Kim. On his way out Tyson bequeathed his fire token to…. Nick?!!!

NEXT TIME: “Drop your buffs!” It’s the tribe switch and while Rob is worried it might not fall in his favor, Michele is more concerned with… being stranded on an island with her ex?!

Here are the answers to Gold Derby’s contest questions for “Survivor” 40, Episode 4:

Who will be voted out at tribal council? Tyson Apostol

Who will win Reward? Sele

Who will win Immunity? Sele