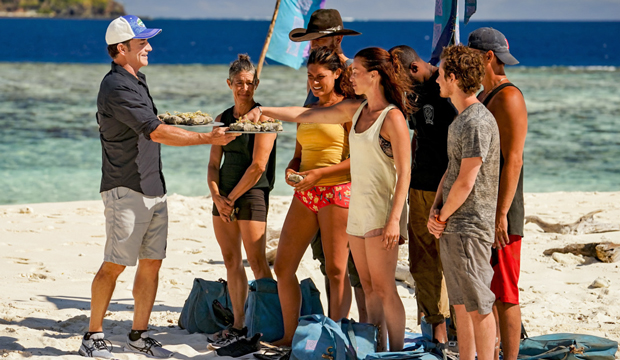 Heading into Wednesday’s fifth episode of “Survivor: Winners at War,” Gold Derby readers predicted that the castaways most in danger of being voted out were Rob Mariano, Adam Klein and Parvati Shallow. These three were at the bottom of their Sele tribe following the recent eliminations of Danni Boatwright and Ethan Zohn. However, a tribe swap was on the horizon for all 15 players still in the game. Did the switcheroo help or hurt the games of Boston Rob, Adam and Parvati? And who was the sixth castaway to have their torch snuffed by Jeff Probst?

Below, read our minute-by-minute “Survivor: Winners at War” recap of Season 40, Episode 5, titled “The Buddy System on Steroids,” to find out what happened Wednesday, March 11 at 8:00 p.m. ET/PT. Then be sure to sound off in the comments section about your favorite castaways on CBS’s reality TV show, who currently holds immunity idols and fire tokens, and who you think will ultimately join the “Survivor” winners list.

SEE‘Survivor 40’ battlelines: Why Tyson’s perfect plan was too dangerous and how Yul won the battle

8:00 p.m. – “Previously on ‘Survivor’!” In last week’s fourth episode, the Dakal tribe lost their second immunity challenge of the season and had a tough decision to make back at camp. Tyson Apostol wanted Nick Wilson gone because he’s a newer winner who’s coming after the people with connections. Nick wanted Tyson gone, but worried he had a hidden immunity idol. In the end, it all came down to Sandra Diaz-Twine, who decided to send home Tyson because he’d previously thrown her name out there. Who will join Tyson at Extinction Island? Let’s go!

8:01 p.m. – The next morning at Dakal, Nick was glad to see Tyson out of the game because he was the “only one rocking the boat,” and that feeling wasn’t swayed by Tyson leaving him his fire token. Yul Kwon deepened his personal connection with Sarah Lacina and Wendell Holland by reminiscing about his friendship with Jonathan Penner who he met on his original season. It was another heartwarming moment from Yul’s perspective, which is something we pay attention to when considering the “winner edit” for players.

8:03 p.m. – Later that day the two tribes met Jeff on the same beach the season began on where news broke that they’d drop their buffs and switch tribes. Everyone picked a random satchel with a new buff inside, with the results falling into three tribes: New Sele – Wendell, Michele Fitzgerald, Parvati, Yul and Nick; New Dakal – Jeremy Collins, Denise Stapley, Kim Spradlin-Wolfe, Sandra and Tony Vlachos; New green tribe – Rob, Sophie Clarke, Adam, Sarah and Ben Driebergen. The interesting swaps there are Michele and Wendell, who are exes, on the same tribe and then Adam, Ben and Rob who come from the same original tribe, but as Adam puts it are a “fractured” three.

8:10 p.m. – At the new Dakal camp, Jeremy is impressed at how nice it is so he’s thrilled despite falling on the wrong side of the numbers. He immediately began to to find the crack in the other three, singling Kim out as the best spot to get information. Kim made it clear, in not so many words, that she’s been on the outs and doesn’t necessarily trust Sandra and Tony. Later she touched based with Denise and the two agreed to possibly work together with Jeremy.

8:12 p.m. – Elsewhere Tony and Sandra were connecting to make sure that they bring Kim toward them, knowing that she’s in the middle. His approach was to liken her to him and Sandra as a “big player” and remain Dakal strong.

8:13 p.m. – At the new Sele camp, Nick was stoked with his new tribe considering his most trusted allies Wendell and Yul came along with him. He also felt great about the strength of the tribe. Clearly things were awkward between Wendell and Michele. Parvati was ready to find her own crack to creep into among the Dakal players, going first to Yul since they were on the same original season and his wife is a huge fan of hers. Nick also confessed to Parvati and she was his high school crush. Are things looking up for her?

8:17 p.m. – The topic of Wendell and Michele’s relationship was the hot topic at Sele which Michele and Parvati clued into very quickly. Wendell was not quite ready to get close to Michele, keeping his distance from both of the women. The guys stuck together, obviously feeling comfortable in their position.

8:19 p.m. – The green tribe, Yara, arrived at an entirely new beach, requiring them to start from scratch in terms of a shelter and other fixings. Ben was least comfortable with the shake down of the swap, addressing again the poor relationship he has with Adam and Rob. Sarah, holding the steal-a-vote advantage, knew that her power could save her and Sophie from their new tribe’s first vote if it came down to it, but she was much more concerned with finding a way to not have to use it and still save them both. The guys were very open about their fractured past, opening up three different cracks for the women to squeeze into.

8:22 p.m. – All five of the Yara players knew there was likely an idol hidden at their new beach so they all went hunting for it. While everyone was looking, Sophie was the lucky one to find it! But it was a split idol, like the one Kim had and shared with her, so Sophie immediately went to Sarah to share it with her. It was a way for the two to connect and vow to work together going forward.

8:28 p.m. – For this week’s challenge, the tribes raced through a series of obstacles with a sand bag toss and puzzle at the end. The two tribes to finish first would earn immunity, but no reward. Yara proved to be the strongest and Dakal the slowest. Sophie and Adam struggled big time on Yara’s puzzle though, opening the door for Wendell and Parvati to make up ground and finish first! Panic set in for the other two tribes, but it just wasn’t enough for Yara because Denise and Tony finished it for Dakal to earn the second immunity!

8:38 p.m. – Back at camp, Sophie felt vulnerable as one of the two that didn’t finish the puzzle in time and knowing that the guys have the numbers. Sarah and Sophie realized that the guys were going to stick together for the sake of numbers. They were right about that — Rob, was prepared to solidify trust with Ben and Adam, but he wanted to make sure that the three of them don’t second guess their decision and refuse to leave for private conversations with the women. That was an interesting strategy of intimidation, that Rob called “the buddy system” in order to make sure no one was alone with Sarah or Sophie.

8:42 p.m. – After hours of boredom at the camp, both Adam and Ben were frustrated with Rob’s attempt to once again control the game. Sarah even noted Rob’s negative energy. That energy triggered all of these former winners into action. Sarah and Sophie were angry at the guys for playing the way they were and with such a huge wall up Sarah considered again using her steal-a-vote. She also agreed to give Sophie her half of the idol back so that she could use it just in case. As the five began their trek to tribal council, Sophie said that the only sign she received from either Adam or Ben was a nod, wink or the mouthing of words when Rob wasn’t looking that they’d vote him out. That is a dreadfully low amount of reassurance!

8:49 p.m. – At tribal council, everyone agreed that in a normal season the first handful of eliminations go to people making glaring mistakes, but in a season of winner they all know better than to stick their neck out in that way. Sarah and Sophie both opened up about how very little strategy at camp because of the mood and energy between the guys. The girls used tribal council as an opportunity to openly talk to any of the guys willing to work with them. Sadly, none of the guys really bit and instead doubled down on the “numbers game” aspect of sticking together.

8:55 p.m. – After the votes were cast, Sophie did not use her idol and so Jeff read the votes: Sarah, Rob, Rob, Rob. Adam and Ben both dumped Rob! And while Rob had no words for any of them as he walked out, the editors had no words for us either! We didn’t get to see who he bequeathed his token to!

NEXT TIME: Yara is in high spirits without Rob at camp, but that didn’t last long once Jeff said that at the next immunity challenge only one tribe will be safe from the vote.

SEEBoston Rob sounds off on ‘Survivor’ tribe swap: ‘This is the part of the game that I really don’t like’ [WATCH]

Here are the answers to Gold Derby’s contest questions for “Survivor” 40, Episode 5:

Who will be voted out at tribal council? Rob Mariano

Who will win Immunity? Sele and Dakal