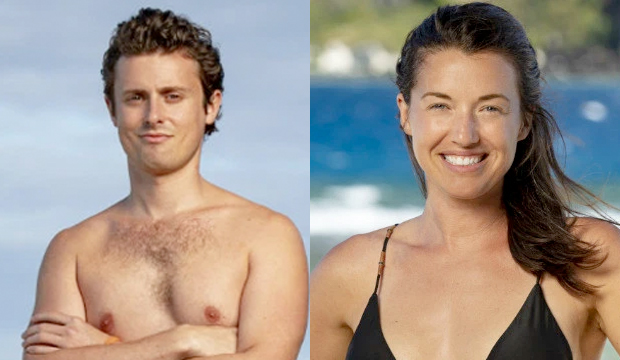 Heading into Wednesday’s double elimination episode of “Survivor: Winners at War,” Gold Derby readers predicted that the castaways most in danger of being voted out were Adam Klein and Parvati Shallow. These two placed at the bottoms of their Yara and Sele tribes, respectively, following last week’s tribe swap, while Sandra Diaz-Twine was the likeliest to go home from Dakal. So who were the seventh and eighth castaways to have their torches snuffed by Jeff Probst?

Below, read our minute-by-minute “Survivor: Winners at War” recap of Season 40, Episode 6, titled “Quick on the Draw,” to find out what happened Wednesday, March 18 at 8:00 p.m. ET/PT. Then be sure to sound off in the comments section about your favorite castaways on CBS’s reality TV show, who currently holds immunity idols and fire tokens, and who you think will ultimately join the “Survivor” winners list.

7:59 p.m. – “Previously on ‘Survivor’!” In last week’s fifth episode, the tribe swap ended up being the demise of Rob Mariano … at least for now. After his “buddy system” plan failed him at the Yara tribe, he was unanimously voted out by Adam, Ben Driebergen, Sophie Clarke and Sarah Lacina. Boston Rob then joined his wife Amber Mariano at the Edge of Extinction as well as Natalie Anderson, Danni Boatwright, Ethan Zohn and Tyson Apostol. Which two of the remaining 14 castaways will be voted out tonight? Let’s find out!

8:00 p.m. – The day after eliminating Rob it was party vibes for the remaining Yara members. Ben felt like Rob had showed a lack of respect for the newbies by trying to strong arm them. Ben felt himself getting closer to Sarah and Sophie, but Adam felt nervous about the growing connection among the other three, leaving him on the outs should they return to tribal.

8:02 p.m. – On Rob’s first morning at EoE, the group of six was offered another chance to earn a fire token with a clue that put them on a search around the island. Tyson and Rob were the only two without a token in their possession, but in this case Rob had the added bonus of his wife also looking for him. Tyson clung to the clue “at the right place at the right time,” thinking immediately of the tide that comes in and out with time. Sure enough he found the package hidden in the rocks during low tide! In the package was an idol nullifier that he could sell to a player in the game for a fire token.

8:05 p.m. – Tyson successfully sold the nullifier to Parvati who quickly bought it. Then Tyson used his new fire token to immediately purchase a jar of peanut butter for himself in the hopes that to eat it in secret would help him build calories for the upcoming challenge to return to the game. Interesting that Tyson uses his token really quickly while Natalie continues to hoard her… four! Two very different fire token strategies at play there.

8:09 p.m. – On Day 16 the three tribes arrived on the beach for their next challenge, giving Dakal and Sele their first glimpse that Rob was voted out.  For the challenge the three tribes had to journey into the water for bags of ice that had balls hidden in them that they’d use to maneuver through a maze in order to earn immunity. This time only one tribe earned safety while the other two would go to separate tribal councils to vote someone out. Both Sandra and Michele Fitzgerald sat out for their respective tribes.

8:12 p.m. – Sele got out to an early lead with all three of their bags through the gated barrier before the other two tribes and on to the beach. Yara was able to pass Dakal when Kim Spradlin-Wolfe and Denise Stapley had trouble carrying one of the heavy bags of rice along the sand. Ben was able to make up some ground on Wendell Holland in the second stage of the race, getting Sophie and Nick Wilson to their mazes quicker than Dakal who put Jeremy Collins on their maze. After a cocky screw up from Wendell, Adam passes up Sele to set Sophie up with a lead on their third ball. After making their first ball Sophie was able to easily get a second one through the maze and into their third slot before Nick could make it happen for Sele. And so Yara won immunity send the other two there to even out the three tribes!

8:21 p.m. – At a bummed Sele camp Parvati felt in the hottest water, especially after Rob was voted out. In her position the idol nullifier wasn’t much help because she doesn’t have the numbers. But Nick was drawn to her and thought he’d want to work with her in the game, but now she’s in an alliance with the guys that want to vote her out. Elsewhere on the beach Parv and Michele discussed how closed off both Yul Kwon and Wendell, leaving Nick as their only option. Michele felt in a particularly odd position because she knew she couldn’t save Parvati and so she spoke with Wendell about finding a way for it to benefit her. Her idea? Vote Wendell so Parvati would give her the token. That rubbed Wendell the wrong way and made him second guess how much trust he can put in her.

8:24 p.m. – Later Wendell and Parvati discussed possibly working together, causing Wendell to say that if she gives him two fire tokens that he’d vote anyone she wanted him to out. She used that as ammunition to approach Nick and turn him against Wendell. That was a sore spot for Nick because he had talked with Wendell earlier about going to the end together. Michele also spoke to Nick later and confessed that she trusts Parvati more than she trust Wendell. In Nick’s position he assessed Parvati as a “visible threat” and Wendell as a “hidden threat.”

8:26 p.m. – At Dakal Tony Vlachos was worried about Kim and Sandra possibly flipping on him despite them having the numbers advantage based on original tribes. When he skipped off out of camp into his “spy shack” he overheard the other four discuss his whereabouts and Jeremy attempt to work over Sandra. Both he and Denise knew their numbers weren’t in their favor and so they independently considered using their respective advantages: Jeremy’s “safety without power” to leave tribal and be immune and Denise’s hidden idol.

8:29 p.m. – Denise decided to throw Jeremy under the bus to Sandra and Kim in order to better her position, but at the same time Tony was still missing which made everyone start discussing potentially getting rid of him instead. When he finally emerged from his shelter he popped up on Kim and Sandra and had to confess to being stressed out. Jeremy was speaking Tony’s language when he said that he’d prefer to keep threats in the game rather than vote them out, which put Denise on the chopping block, but that wasn’t necessarily something Sandra wanted to do. Feeling safe for herself, Sandra decided to offer Denise her immunity idol for two fire tokens so that she could protect herself and take Tony out. The deal they actually made was that Denise would give her one token now, use the idol and if it’s real then give her the second token. Sandra made that deal and handed the token over! Now the decision is in Denise’s hand, but keeping Sandra in the game for another vote means she’d earn another token! I looooooooove where this is going!

8:38 p.m. – At the first tribal council of the night, Sele discussed relationships and the impact that has on trust. Wendell said he’s willing to stab people in the back and in the front, but Nick pointed out that they all came to this show as winners having used very different strategies. Parvati and Michele used their time to trash Wendell’s point of view in order to paint him in a negative light to Nick. It also came out that Wendell attempted the deal with her and he reiterated that again in front of everyone else and Wendell said it was a current offer that she could still make. I’m not sure how Yul and Nick can hear Wendell make this kind of deal in such a sketch way and not be inclined to vote him out instead!

8:50 p.m. – When Dakal came in Jeff asked the same question: what is this game about? For this tribe it’s about threats. In that conversation Sandra put out Denise’s name as a non-threat, and herself, Rob and Tony as threats. But Denise pointed out that everyone is a threat for very different reasons. Jeremy told Jeff that there are two stories to their vote tonight: either the four stick together as big threats and vote out Denise or the original Dakal members stick together and take out Jeremy or Denise.

8:54 p.m. – This time there was an idol used: Denise decided to “settle her stomach” by playing Sandra’s idol and then played her other idol for Jeremy! Jeff read the votes: Denise, Denise, Denise, Denise, Sandra. OMG!!! Denise said screw it to the extra token and took her chance to eliminate Sandra! What a move. Good or bad? Wow.

NEXT TIME: Tensions between Michele and Wendell continued while Jeremy questioned whether or not Tony’s threat level was too high.

Here are the answers to Gold Derby’s contest questions for “Survivor” 40, Episode 6:

Who will be voted out at tribal council? Parvati Shallow; Sandra Diaz-Twine

Who will win Reward? Yara

Who will win Immunity? Yara