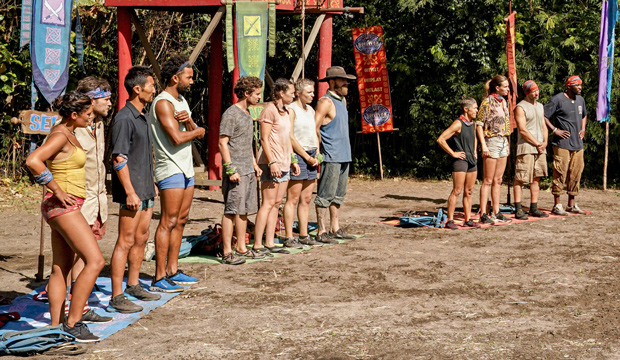 Heading into Wednesday’s seventh episode of “Survivor: Winners at War,” Gold Derby readers predicted that the two castaways most in danger of being voted out were Adam Klein of Yara and Yul Kwon of Sele. With only 12 players still in game proper, who was the ninth castaway to have their torch snuffed? Meanwhile, with the Edge of Extinction return challenge on the horizon, the eight voted-out players were gearing up to re-enter the competition — but was the pressure too much for Sandra Diaz-Twine, as host Jeff Probst hinted last week?

SEE‘Survivor’ preview trailer: Ethan desperately wants to ‘get back in the game’ [WATCH]

Below, read our minute-by-minute “Survivor: Winners at War” recap of Season 40, Episode 7, titled “We’re in the Majors,” to find out what happened Wednesday, March 25 at 8:00 p.m. ET/PT. Then be sure to sound off in the comments section about your favorite castaways on CBS’s reality TV show, who currently holds immunity idols and fire tokens, and who you think will ultimately join the “Survivor” winners list.

7:59 p.m. – “Previously on ‘Survivor’!” In last week’s sixth episode, there was a brutal double elimination as we said goodbye to two legendary players: Sandra and Parvati Shallow. Sandra was outplayed by Denise Stapley, who used Sandra’s own idol against her, while Parvati and Michele Fitzgerald were simply outnumbered by former Dakal boys Wendell Holland, Nick Wilson and Yul. Their eliminations resulted in each tribe (Yara, Sele, Dakal) being even at four players apiece. Who will be voted out tonight?

8:01 p.m. – At the Edge of Extinction, Parvati had come to the realization that she didn’t make merge for the first time in her “Survivor” journey. And when Sandra arrived and told her story she got a read down from Rob Mariano and the others for playing with her emotions and not keeping the power of her idol for herself. Shortly thereafter she felt like her time had come to an end and that sitting at the Edge for 20 more days was not something she needed to do. And so just like that Sandra raised the white flag and called it quits! To be fair, she’s self aware enough to know that she’s not great at challenges and there’s no way anyone would allow her to win anyway so she wouldn’t waste her time suffering at the Edge.

8:03 p.m. – Back at camp Yul was upset with Wendell’s performance at tribal council. He pulled him aside for a chat to let him know that he lost trust and now there’s a bigger target on his back than was necessary. Wendell was receptive to the criticism and thanked Yul for it, leading him to apologize for his behavior to Michele the next morning. Michele pointed out that creating chaos could get him in trouble, but that put Wendell off again!

8:06 p.m. – OMG. Michele gave Wendell one of the fire tokens Parvati left her! Why! She thought it could repair their relationship, but… uh….

8:08 p.m. – Back on the Edge, Ethan was struggling with his own dilemma in staying in the game. He rekindled his bond with Parvati as a source of inspiration to keep his chin up and continue to play the game for his shot at winning again. Later in the day he brought a box of scrolls to the group that had a clue to four fire tokens on the top of the mountain that they’d all have to compete for. Tyson was the first player to find a token, but no one was able to find any of the other three. Except that Rob had actually found all three of them and lied to them about it!

8:16 p.m. – At Dakal, Tony was feeling comfortable as his bonds with Jeremy Collins and Kim Spradlin-Wolfe strengthen and Denise’s move to oust Sandra made her a bigger target which for him meant she was a new shield. The problem is that Jeremy still sees Tony as the biggest threat in that tribe. Kim was concerned with the long-term and so she solidified an alliance with Denise and Jeremy so that they could push forward through to merge as a solid three.

8:19 p.m. – At Sele, Sophie Clarke noticed tension at camp over the fact that the boys (Ben Driebergen and Adam) had no clue if the idol had been found at the camp yet. Ben thinks Adam has it and Adam is convinced that either Sarah Lacina or Ben already have it. But no one suspects that Sophie actually has it!

8:26 p.m. – For tonight’s challenge the tribes had to work together to fill and carry a large saucer in order to fill a well that would provide them puzzle pieces. Once again this was a two-tribe winning challenge with only one tribe having to vote someone out. Dakal and Yara took early leads in the race aspect, but Kim struggled to hold her end of the saucer which caused Dakal to lose a lot of water along their journey. Yara decided to move a lot slower on their way to the well with water, but it paid off because they were able to drop their puzzle pieces with just one trip while the others needed two! Yet that only gave them a slight time advantage over the other two tribes who quickly caught up and were working on their puzzles nearly at the same rate as Yara. Luckily Sophie and Ben made massive moves on the puzzle to finish first and earn immunity! At Dakal, Denise and Jeremy were also working quickly, but Wendell and Michele gave them a run for their money. Somehow, Dakal won it by literally just seconds to earn the second immunity!

8:39 p.m. – Back at Sele camp, both Yul and Nick were upset at Wendell’s trash talking during the challenge because losing only by seconds meant that they could have won without it. They were so upset that they devised the plan to vote Wendell out, but with the plan to tell him they’d be voting Michele. Meanwhile Wendell was now willing to work with Michele in order to counter Yul’s move against him to vote out Yul instead! In that regard both Yul and Wendell were assuring Michele that she was safe.

8:41 p.m. – Yul came up with a plan to get Wendell’s fire token from him by asking for the token in exchange for giving up his own name as the option to tell Michele. Nick heard this plan and it made him question how dangerous Yul is in the game and so he pulled Michele aside so that the two of them could decide together who they’d vote out: Wendell or Yul. With Wendell they didn’t like his personality, but with Yul they felt they’d just be following along with his plans the rest of the game.

8:48 p.m. – At tribal Jeff pointed out that Yul is the last remaining “old school” player in the game and wondered whether the game is way too fast now for the old school players to keep up with. As is typical of Yul, he intellectualized the entire concept of fire tokens. The pre-existing relationship conversation also came up which once again pit Michele and Wendell against each other with Wendell making it clear that Michele isn’t necessarily concerned with working with her deep into the game.

8:55 p.m. – Because no one on this tribe has an idol or other advantage to use, Jeff read the votes: Yul, Wendell, Yul, Yul. And he was blindsided! Close call for Wendell who narrowly escaped that and it looks like he felt how close it was! On Yul’s way out he dropped two fire tokens–one for Sarah and one for Sophie!

NEXT TIME: It’s merge time and everyone’s name is being thrown out as an option!

Here are the answers to Gold Derby’s contest questions for “Survivor” 40, Episode 7:

Who will be voted out at tribal council? Yul Kwon

Who will win Immunity? Yara; Dakal

Will anybody quit or be medevaced/removed? Yes