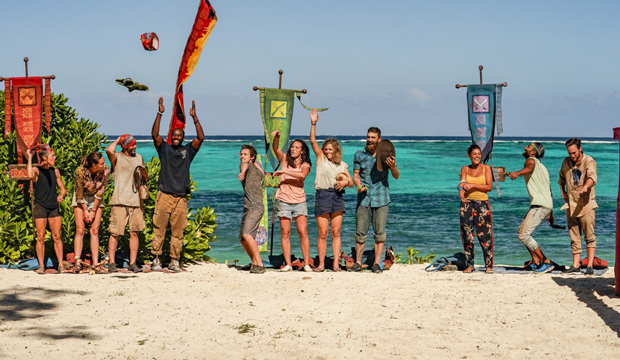 “Drop your buffs!” That’s right, Wednesday night was the highly anticipated merge episode of “Survivor: Winners at War.” Eleven castaways made it to this all-important juncture in the game: Sophie Clarke, Jeremy Collins, Ben Driebergen, Michele Fitzgerald, Wendell Holland, Adam Klein, Sarah Lacina, Kim Spradlin-Wolfe, Denise Stapley, Tony Vlachos and Nick Wilson. However, they would soon be joined by one of the voted-out players from the Edge of Extinction. After all was said and done, who became the first castaway from the merged tribe to have their torch snuffed by Jeff Probst?

SEEUnaired ‘Survivor’ pizza challenge is the perfect example for why we need longer episodes, and 95% of viewers agree

Below, read our minute-by-minute “Survivor: Winners at War” recap of Season 40, Episode 8, titled “This is Where the Battle Begins,” to find out what happened Wednesday, April 1 at 8:00 p.m. ET/PT. Then be sure to sound off in the comments section about your favorite castaways on CBS’s reality TV show, who currently holds immunity idols and fire tokens, and who you think will ultimately join the “Survivor” winners list.

7:59 p.m. – “Previously on ‘Survivor’!” In last week’s seventh episode, the Sele tribe lost immunity and things took a turn when Wendell and Yul Kwon started going against each other. Michele and Nick were caught in the middle, but they ultimately decided to stick with Wendell and vote out Yul because his savvy strategic game worried them. Over at the Edge of Extinction, there was a fire token goose chase with Rob Mariano finding three and Tyson Apostol locating one. How will they use their all-important wooden currency?

8:00 p.m. – At the Edge of Extinction the ousted players received a scroll explaining how to spend their fire tokens. Amber Mariano gave hers to husband Rob so that he could buy an advantage in the challenge and an idol with his other three. Natalie Anderson made the same deal with her four tokens.

8:02 p.m. – At the site of the next challenge, Jeff announced to the players still in the game that it was merge time. But the challenge wasn’t for those 11, it was for the players at the Edge of Extinction for their chance to return to the game and make it an even 12. For the challenge they raced through a series of obstacles that ended with a puzzle to balance a ball up a narrow track. Only Yul Kwon, Parvati Shallow and Amber raced in the challenge without an advantage while the other five did. Tyson was through the first and section sections of the route first, followed closely by Rob and Ethan Zohn.

8:07 p.m. – In the second to last section, Rob had taken the lead and successfully finished it before any other player started. Both Natalie and Tyson were able to pass through that stage quickly enough to catch up to Rob on the final section. While those three struggled to balance their balls correctly, everyone else caught up except for Amber who was stuck on the section behind them. Eventually Tyson found himself with a lead over Yul and Rob, and after some close calls as he maneuvered toward the top Tyson was able to complete the section literally seconds before Rob!

8:16 p.m. – Upon return to Sele beach, the new home of the merged tribe, the 12 players were greeted with a merge feast. Everyone wanted to know how Sandra Diaz-Twine was voted out and Denise (stupidly?) shared her story about exactly how she get Sandra out of the game. It was enough information to put a target on her back because it’s a huge box ticked on her resume to win the game.

8:18 p.m. – Wendell was looking to pad his numbers a bit on top of his closest allies Michele and Nick. His first attempt was with Jeremy, and so the two connected over shared relationships with Michele and Denise. But Jeremy was looking at Nick as someone to vote out so that he could replace him as Wendell’s number one ally.

8:20 p.m. – Elsewhere, Ben and Tyson bonded over wanting to keep “big targets” in the game as shields for each other. They approached Tony and Jeremy to join their group, naming the Nick, Adam and Michele as low profile players that they can get out.

8:24 p.m. – While the group struggled with downpours, Wendell, Nick and Tyson huddle together and discussed plans to get rid of Denise because of her move on Sandra. It was still raining later in the day when they made their way to their first immunity challenge with Sophie crying from the shivering cold. That didn’t bode well for her chances in a challenge that required them to be the last male and last female hanging on to a totem pole.

8:28 p.m. – Michele was the first to drop, sliding down almost the entire length of the pole to the ground. Soon after, all of Adam, Sarah, Tyson, Wendell and Tony slipped out as well. Sophie was the next to fall, leaving only Kim and Denise as the options for the female winner. By that time Kim was significantly lower than Denise and just couldn’t hold on which meant that Denise won immunity and a fire token for herself!

8:31 p.m. – Ben was the next to drop for the guys, leaving it down to Nick and Jeremy to earn the male immunity. Jeremy was the most sturdy of all players, still hanging on to the top of his pole as Nick slid to his final toe hole and ultimately dropping. So Jeremy became the male winner for immunity and a fire token of his own!

8:38 p.m. – Back at camp, “big targets” Jeremy, Ben and Tony eyed breaking up Nick and Wendell by getting rid of Nick. That appealed to Tony who sees Nick as a hyena that just sits on the outskirts and to Ben who felt like Nick was butting in to too many conversations. Later, Nick gave up Adam’s name because he’s Denise’s closest ally. When the idea of breaking up Nick and Wendell was posed to Sophie, she was more keen on voting out Wendell and was clued in to the idea that the guys were binding together. She pointed to Jeremy as the power player of the group and Wendell as his right hand man. Eventually that got back to Jeremy through Ben and so he pushed back. That made Adam his newest target because at least Nick and Wendell were voting for Adam.

8:42 p.m. – When Jeremy spoke to Denise about voting out Adam she was surprisingly okay with it, but that was a good position for her to take if she felt he was on the chopping block. Adam started feeling weird around camp, but Sophie assured him that his name wasn’t being thrown out. That being said, no one was telling Adam what the decision was between Wendell and Nick so it left him feeling pretty scared.

8:49 p.m. – At tribal, Jeff wanted to know if Tyson was on the chopping block just because he’s already been voted out. Both Sophie and Tony said that the dynamics of the game have changed and his name didn’t come up because he has less baggage than other people in the game. Adam was still visibly frustrated by the lack of conversations that people had with him throughout the day and so the topic of paranoia came up, putting Adam further on edge.

NEXT TIME: Nick is on the path to revenge, but it puts a target on his back.

Here are the answers to Gold Derby’s contest questions for “Survivor” 40, Episode 8:

Who will be voted out at tribal council? Wendell Holland

Who will win Immunity? Denise Stapley and Jeremy Collins