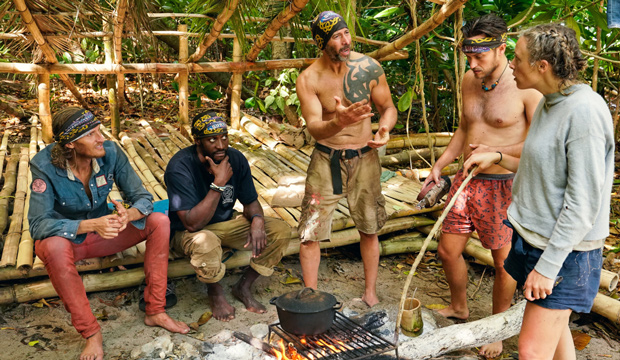 Heading into the ninth episode of “Survivor: Winners at War,” only 11 people remained in the running to win the $2 million prize: Tyson Apostol, Sophie Clarke, Jeremy Collins, Ben Driebergen, Michele Fitzgerald, Adam Klein, Sarah Lacina, Kim Spradlin-Wolfe, Denise Stapley, Tony Vlachos and Nick Wilson. With this being an all-winners season, everything was on the line for these 11 castaways, and no one wanted to have their torch snuffed by host Jeff Probst. So how did it all play out on Wednesday night?

Below, read our minute-by-minute “Survivor: Winners at War” recap of Season 40, Episode 9, titled “War Is Not Pretty,” to find out what happened Wednesday, April 8 at 8:00 p.m. ET/PT. Then be sure to sound off in the comments section about your favorite castaways on CBS’s reality TV show, who currently holds immunity idols and fire tokens, and who you think will ultimately join the “Survivor” winners list.

7:59 p.m. – “Previously on ‘Survivor’!” In last week’s eighth episode, the three tribes merged into one following the highly anticipated Edge of Extinction return challenge. Tyson just barely beat out Rob Mariano to earn a coveted spot back in the game, and amazingly his name was never brought up as someone to eliminate at tribal council. Instead, it was Wendell Holland who was seen as a threat due in part to his friendship with Jeremy, and he was eliminated by a nearly unanimous vote; only Michele and Nick voted to keep him. Who will be sent to the Edge tonight?

8:00 p.m. – The next morning, Michele was annoyed at being left outside of the vote for the second time in the game despite being one of the people that has been wanting Wendell out the entire game. She had a chat with Nick and told him that his name was on the chopping block which put him on the offensive mindset going forward.

8:02 p.m. – Adam told Michele that he believes there’s an active hidden idol embedded in the podium that Jeff stands at during tribal council, thinking it matches the idol that Denise found earlier in the game. Please tell me it’s not an actual idol and he’s going to try to steal it and use it!

8:03 p.m. – On Edge of Extinction the players get another clue to something hidden on the top of the mountain. As the players broke off in pairs, Natalie had the goal of making sure that Wendell didn’t get the advantage because he was freshest from the game with the most food in his belly. Danni had the brilliant idea that the clue referenced the last season of Extinction and that correctly led her and Parvati to the advantage! It was a wooden coin that would give a player in the game the chance to flip it for a 50/50 chance of immunity. In order to get fire tokens they decided that they’d sell it to Michele (she has the most fire tokens in the game) in the hopes that they’d get to buy some peanut butter. They told Natalie, Rob, Amber and Ethan about it, too, wanting to share that peanut butter with them.

8:07 p.m. – At the reward challenge the eleven players were divided into two teams of five (with one sitting out) to run a water obstacle course for the chance to have a Chinese take out lunch. The red team: Tyson, Tony, Adam, Jeremy and Nick. Blue team: Sarah, Kim, Ben, Sophie and Michele. Denise was not chosen and forced to sit out.

8:09 p.m. – Blue team got to an early lead out of the water and in the phase on the beach that transitioned puzzle pieces to their solvers Sophie and Michele. But red wasn’t far behind with Jeremy and Nick working to play catch up. Though red looked like they were close to finishing with only one piece needing to fit in at one point, Sophie and Michele managed to pull through and edge out the win!

8:12 p.m. – Though she was part of the winning team, Sarah decided to give up her spot in the reward to birthday boy Nick, but that just made Adam question whether or not she was playing too hard and was the next threat that needed to be taken out.

8:16 p.m. – Sarah felt like her gift to Nick was not a game move and instead was just a lesson in human kindness. But Tony pulled her aside to “scold” her about the emotional moment that puts a target on her back. But from Sarah’s perspective it wasn’t that big of a deal while Jeremy, Denise and Adam were all agreeing that it was a ballsy move that puts too big of a target on her back. So now they’re all talking about her when before they weren’t!

8:18 p.m. – At the reward the group was concerned with finding clues to advantages and so they went around in a circle opening fortune cookies hoping that one would contain that clue. They didn’t find anything, but back at camp Michele found the 50/50 coin in her bag, offered to her to use up until the final 7, but she’d have to give away all four of her fire tokens in order to keep it. Michele remembered her fortunes from the cookies that basically told her that she should take the risk to buy the advantage and so she did!

8:24 p.m. – For the immunity challenge the players had to balance on a triangular platform buoying in the water with the last person standing earning both immunity and a fire token. It was extremely difficult for everyone from the very beginning, but most of all for Michele who was the first to drop. Denise was the only other one to drop in the first 5-minute stage, leaving nine to move on to the second stage.

8:27 p.m. – The second stage was set to last for 10 minutes, but Tyson barely made it seconds before falling, followed quickly by Jeremy and then Tony. Sophie, Sarah, Kim, Nick, Adam and Ben all advanced to the third and final stage at the top of their triangles.

8:29 p.m. – Adam wasn’t able to even get on top of his triangle by the time the round started and then Sophie, Sarah and Nick all fell as well, leaving Kim and Ben to fight for immunity. In the end, Ben lost his balance and Kim held it together for safety!

8:35 p.m. – As far as Kim was concerned, the vote seemed like an easy vote to split between Nick and Adam with Nick as her preference to go. Ben wanted to leave Adam out of it though and split between Nick and Michele instead. Tyson was eager to tell Nick his name was on the chopping block though and so they sought to create enough chaos among the tribe to have a lot of names thrown out there. At some point both Sarah and Sophie’s names were put out there.

8:37 p.m. – Once Sarah’s name was thrown out there, Kim and Tyson who didn’t want her out decided that if Adam had enough pull in the tribe to get everyone switched to Sarah that it was a sign that he was more dangerous than it seemed. This was a lesson for Tyson who learned that the chaos made everyone spin against each other, leaving Tyson off the table completely. Eventually it became a hot potato between Sarah and Adam’s names with the two pitted against each other.

8:39 p.m. – After hearing that people were saying Ben and Sarah were too close Ben confronted Adam about it, forcing him to basically admit that he was the one who said it. At that point “all hell broke loose” at camp with everyone scrambling to figure out who they’re all voting for with Nick, Sarah, Adam and Tyson all on people’s lips. The chaos made Adam feel like he’d have to make a move for the supposed idol in Jeff’s podium! Yes, that’s what we want!

8:47 p.m. – At tribal council, Sarah basically pointed out that it’s definitely an individual game now because everyone is throwing each other’s names out and there’s no alliances of people that haven’t turned on each other. Nick called out the “easy votes” of himself, Adam and Tyson and was visibly frustrated by how no one is willing to go after the big targets. While all this discussion was going on there was a lot of whispering going between people, centered mostly around Kim, Jeremy, Ben, Sophie and Sarah.

8:50 p.m. – Once again Adam was the most nervous player in the game and brought up the tension he felt from Ben all day, forcing an argument between the two of them while everyone else whispered with one another freely! Could they actually be this dumb?

8:53 p.m. – Eventually the council got to a point where no one would speak to Adam, making it abundantly clear that they were either all voting for him or leaving him out of their plans completely. After the votes were cast, Adam asked if anyone wanted to play an idol which gave Adam the opportunity to make a move for the “idol” in Jeff’s podium. But the piece didn’t come off and so Adam didn’t have an idol to play… and Jeff read the votes: Sarah, Adam, Nick, Adam, Nick, Adam, Adam, Adam, Adam. And so, doing everything he could to stay in the game, Adam was voted out. On his way out he gave his one token to Denise.

NEXT TIME: Everyone is looking to make a move and the pair of Sophie and Sarah as well as leader Jeremy are all on the chopping block.

Here are the answers to Gold Derby’s contest questions for “Survivor” 40, Episode 9:

Who will be voted out at tribal council? Adam Klein

Who will win Reward? Sarah, Kim, Sophie, Michele and Ben

Who will win Immunity? Kim Spradlin-Wolfe