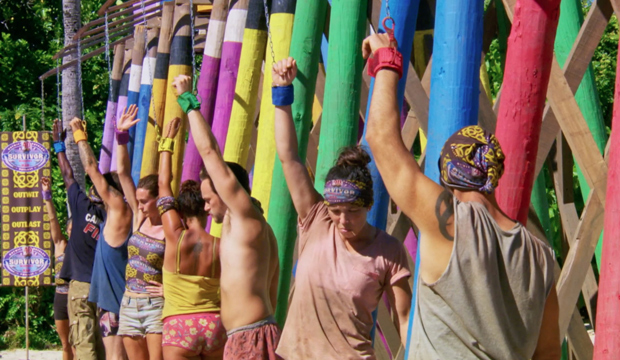 On this week’s third to last episode of “Survivor: Winners at War,” Jeff Probst devilishly decided to offer temptation in the form of milk, chocolate, cookies and peanut butter during an especially grueling immunity challenge. While Denise Stapley and Tony Vlachos both hung in there and received safety at Tribal Council, three other former winners of the game — Nick Wilson, Kim Spradlin-Wolfe and Michele Fitzgerald all succumbed to their hunger pains  by dropping out and chowing down. At least Nick got a fire token from his decision in the form of a bribe from Tony to quit.

Anyone who has watched “Survivor” over the years, opting for food over winning a challenge is never a good move as you go forth to the finale. Considering the jury will be packed with voted-out players who had to endure the greater challenges of the Edge of Extinction for days on end with little chance of returning, they might see such a choice as a weakness. But it is especially surprising on a season that features the best players ever to compete on the show.

SEE‘Survivor’ 40 episode 12 recap: Who was voted out in ‘Friendly Fire’? [UPDATING LIVE BLOG]

As the host told Entertainment Weekly in a post-show interview, “There’s a crazy mind game that goes on during an endurance challenge, at least that’s been my observation. The challenge begins and players internally assess their chances. … They are constantly assessing the situation, checking the competition, looking for any way to relieve the pain. When you add the possibility of a food temptation, you now have another variable.”

Jeff notes that both Michele and Kim went on to say they regretted their decision afterwards. He thinks the ladies were too hard on themselves. “You can second guess forever. One thing I have worked on in the last many years is the idea of always moving forward. You make a decision and immediately start moving in that direction.” Ultimately, however, Kim might have paid a price especially since she has been a bit of an outsider and was voted out. But Jeff stands up for her: “She never quit. She kept trying to turn the game … it just didn’t come together.”

The host also addresses next week’s two-hour penultimate episode. Jeff speaks for most loyal “Survivor” fans when he says, “I don’t want this season to end. Next week is a giant episode. Two hours. We rarely do two-hour episodes, but there was so much story happening, we had to expand on the fly. And the finale is going to be three hours. These players all deserve such giant praise. They played on a level that may never be repeated.” His final words: “Keep your seat belt fastened. This ride is not over.”