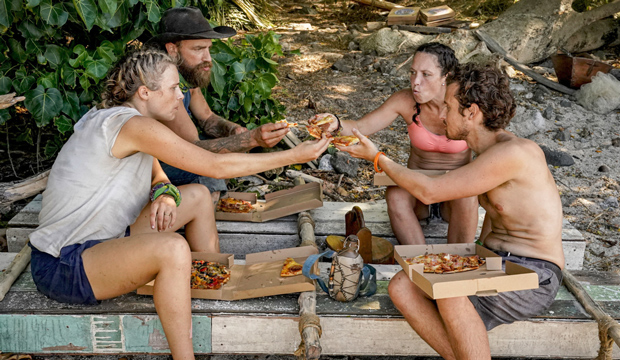 We’re midway through the landmark 40th season of “Survivor,” and one thing is clear: 60-minute episodes just aren’t enough. Too much good material is being left on the cutting room floor — case in point, an entire pizza challenge went unaired from last week’s episode. (Adam Klein confirmed on social media his Yara tribe won the yummy reward comp.) Recently we asked “Survivor: Winners at War” viewers whether they were okay with 60-minute episodes, and only 5% said yes. The other 95% demanded more, more, more, but their poll results were split between wanting 90-minute editions and two-hour shows.

Many fans wondered why host Jeff Probst didn’t welcome Yara, Dakal and Sele to last week’s immunity challenge with his usual “getting your first look at the other tribes, Sandra and Parvati voted out at the last tribal councils” line. We can now assume he likely did say that line … only at the unaired reward comp. What were the other castaways’ reactions to seeing “Survivor” legends Sandra Diaz-Twine and Parvati Shallow being booted from the game before the merge? We’ll never know.

SEE‘Survivor’ host Jeff Probst on Sandra’s quitting: ‘I don’t think it changes her legacy. Sandra is a legend’

The fact that “Survivor” goes to all the trouble of creating, testing, running, filming and editing a reward challenge but then doesn’t air it because of time constraints is no doubt aggravating for all of those involved. So much wasted effort. Plus, Adam, Ben Driebergen, Sophie Clarke and Sarah Lacina were no doubt bummed they didn’t get to see themselves prevail in what was no doubt a personal highlight on this 40th season.

Another “Survivor” mystery that could have used extra breathing room to explain was Sophie’s mysterious disappearing and reappearing shorts during the immunity challenge. As aired, her Yara tribe only took one trip from the water bucket to the puzzle. However, eagle-eyed viewers noticed that her blue shorts kept popping on and off, particularly when she got to the balance beam. Did Yara actually make two trips, but the show had to edit that out for time reasons?

How did Sophie put on a pair of shorts while carrying a giant saucer full of water? pic.twitter.com/SvfLzgRx7o

Then there was the Edge of Extinction storyline. Lots of screen time was devoted to the fire token goose chase, with Rob Mariano finding three and Tyson Apostol locating one. Boston Rob lied to everyone, saying that he hadn’t found any wooden coins. But surely he later confessed the truth to Amber Mariano … right? There’s just no way the “Survivor” Godfather let his loving wife search high and low for hours on end for fire tokens that didn’t exist. That would have been a fun conversation to watch play out on television.

Since its debut in 2000, “Survivor” has always been an hour-long show (outside of its extended finales). However, take a look at the reality TV landscape of 2020 and you’ll see that one hour just isn’t enough. Programs like “The Bachelor,” “Dancing with the Stars,” “American Idol,” “America’s Got Talent” and “The Voice” air in two-hour blocks, while “RuPaul’s Drag Race” is a 90-minute program with a 30-minute “Untucked” after-show.

Don’t forget, a typical episode of “Survivor” takes place over three days, which equates to 4,320 minutes on the island. That means there are hours and hours of footage we never get to see. Should CBS rethink its scheduling strategy and start producing longer “Survivor” episodes each week? Sound off down in the comments section.