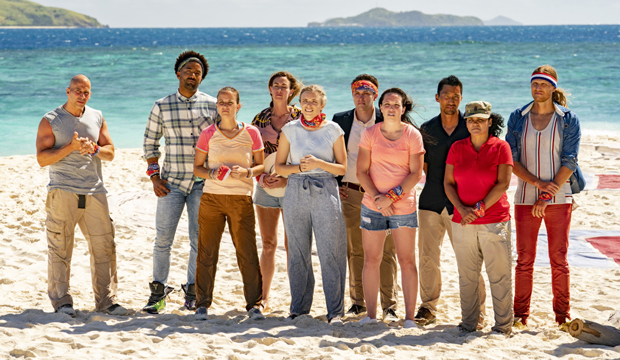 Attention, “Survivor” fans: we’re live-blogging the epic two-hour season premiere of “Winners at War” in two parts. This is our recap of Part 2 — click here for our recap of Part 1. In case you missed the first hour (warning: spoilers!) the unlucky castaway to be voted out was Natalie Anderson (“San Juan del Sur”). After her Sele tribe lost the immunity challenge on day one, her fellow castaways saw her relationship with Jeremy Collins (“Cambodia”) as a huge threat. How did Natalie react to her new digs at the Edge of Extinction? And who was the second castaway in Season 40 to have their torch snuffed by Jeff Probst?

Below, check out our minute-by-minute “Survivor: Winners at War” recap of Season 40, Episode 1 (Part 2), titled “Greatest of the Greats,” to find out what happened Wednesday, February 12 at 9:05 p.m. ET/PT. Then be sure to sound off in the comments section about your favorite castaways on CBS’s reality TV show and who you think will ultimately join the “Survivor” winners list.

9:05 p.m. – Once again, this is our recap of the second part of the two-hour premiere. If you want to read our live blog of the first hour, be sure to click here. All set? Okay, let’s dive in!

9:07 p.m. – As she reached Edge of Extinction, Natalie reflected on the fact that she’s never been voted out of the game. And so she was set to have the longest stay on Edge of Extinction of anyone else in the game. She learned on the island that she’d have an opportunity to earn more tokens.

9:08 p.m. – At Dakal, Sarah Lacina, Yul Kwon and Sandra Diaz-Twine joined heads and discussed how devious Rob Mariano has already been in the game. For Sandra she wanted their tribe to vote out Amber Mariano first. Yul also brought up the poker alliance, but then went to Wendell, Nick Wilson and Sophie Clarke to build a strong alliance there as well. They all agreed that Rob and Amber need to get out as soon as possible, and Yul privately said that the four of them plus Sandra and Sarah could control the entire game.

9:15 p.m. – The next morning at Sele, Michele Fitzgerald was uncomfortable about being left out of the vote. She joined with Ben Driebergen to compare notes on Rob and the other old players. So it looked like this tribe was definitely going to separate into old and new player alliances.

9:17 p.m. – At EoE, Natalie found a clue that presented her with the chance of earning a fire token back. It was a riddle that led her to the top of a mountain path where sure enough she found… and immunity idol good for three tribal councils that she can SELL to a player from the next losing tribe!

9:25 p.m. – For the next immunity challenge the tribes battled through an obstacle course in the water that included rowing, net climbs, a combination puzzle and ring toss. When it came to rowing, Sele was a total mess which allowed Dakal to get an early lead. At the barrel roll, Rob was a total star launching people over using his own body, but it was still a tough challenge for them. By the time they got all their members over the barrel roll, Yul had already solved the combination lock allowing Dakal to being the final stage. But Sele didn’t give up and when Jeremy hit the ring toss he got them to a 2-1 lead over Dakal and then just like that single-handedly brought immunity home!

9:38 p.m. – At Dakal, it was scrambled eggs as people ran around trying to decide who to vote out. Amber felt solid with Kim Spradlin and Tyson Apostol and they threw out Sandra, Tony Vlachos and Nick as options. Sandra’s strategy was to spread “truth, lies and rumors.” We also learned that Natalie gave Sandra the offer to buy the immunity idol for one fire token. Of course Sandra took the bait — she bought it, giving herself some safety through three tribal councils.

9:42 p.m. – Yul clued Tyson in to the poker alliance threat which made Tyson go all in with Yul and Nick and throw out Amber and Kim as options to be voted out. Later Kim noticed that no one would talk to her and that when she would approach a group of people they’d stop talking. Feeling on the outs for the first time, Kim got a little emotional and clearly looked like she didn’t have any avenues to pursue her own safety.

9:49 p.m. – At this tribal, the older players also mentioned how quickly the game moves these days. Tyson pointed out that the older players are more observant of the game while newer players move quickly. The poker alliance topic came up again, much to Tyson and Kim’s chagrin. Kim said that there are way more close relationships in the game than this fake poker alliance. The topic of the $2 million prize also came up and everyone pretty much agreed that it’s too steep of a prize to not throw everyone–friends included–under the bus if they need to.

NEXT TIME: Rob wants revenge on who voted Amber out and Tony climbs a ladder that could mean his downfall!