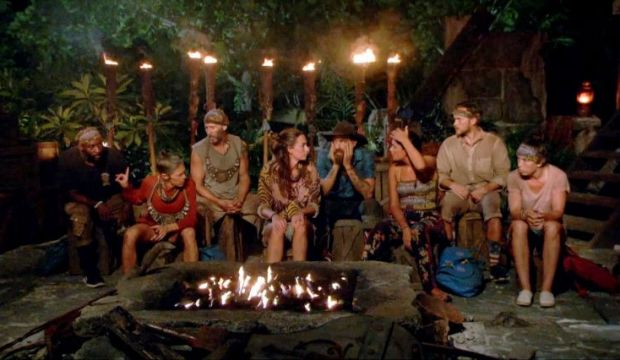 It might not be a new phenomenon, but what was once a sacred ceremony on “Survivor” is now a chaotic, nerve-wracking mess of a ritual as castaways walk among each other to jibber and jabber in trios and pairs while others cautiously whisper their choice of who should be voted out.

It used to be that host Jeff Probst presided over Tribal Council and would prod answers out of whatever attendee seemed to be in hot water or in charge of the decision-making that happened at camp before the players trudged to the area with their torches.

Some believe that such protocol began to dissolve during the Caramoan season that aired in 2013 when the so-called Three Amigos —Malcolm Freberg, Ryan Toepfer and Eddie Fox  — pulled off a triple immunity move that caused an outburst of chatter. More recently on 2017’s Game Changers season, there was a dual tribe vote that led to several groups having private discussions while multiple participants moved about and left their seats before voting out fan favorite Malcolm.

But given that “Winners at War” features past masters of the game who already claimed the title of Sole Survivor, Tribal Council has been more confusing and nutso than ever.  That has led to longtime fans of the show growing impatient over all the mumbling and whispering into ears with castaways climbing over one another. It detracts from the drama of the moment and creates needless tension.

SEE‘Survivor 40’: Jeff Probst muses on the food choice conundrum and next week’s supersized episode: ‘Keep your seat belt fastened. This ride is not over.’

Thank goodness then that Denise Stapley, who had just won an immunity necklace and was safe, brought some sanity to the hectic process when she stopped Jeremy Collins when he tried to whisper his thoughts in her ear. “I’m done,” she stated. “I’m ready to vote.” He asked, “You know you’re the only safe tonight, though?” Her reply: “I fully realize that.” Finally, someone had the guts to stop the madness. In the end, Kim Spradlin-Wolfe was shipped off to the Edge of Extinction.

At least the producers apparently decided at some point to have captions on the screen so viewers know what the heck everyone is saying. Here is one Twitter user’s response:

I gotta say, these chaotic whisper-fest #Survivor tribals are much more enjoyable with subtitles. I really appreciate being able to understand what's being said. I know we're not getting everything but to at least have SOMETHING on the screen gives me some understanding.

Others wish for some kind of restraint and less chaos:

Survivor brings in new elements all the time. Firemaking, tokens, you name it. How about this for the whispers: a Tribal shot clock. The moment whisper chaos begins, Jeff flips an hour glass. All pandemonium kosher until it runs out. Any chaos after is punishable by losing votes.

The biggest complaint is that all the fussing and back-and-forth strategizing doesn’t have that much bang for its buck. Yes, this so-called “season on steroids” have been quite entertaining. But what used to be the dramatic moment of each episode is now undercut with chatter. Take the poll below and tell us how you feel about these cry-outs and whispers at Tribal Councils. Or tell us what you think in the comments section.