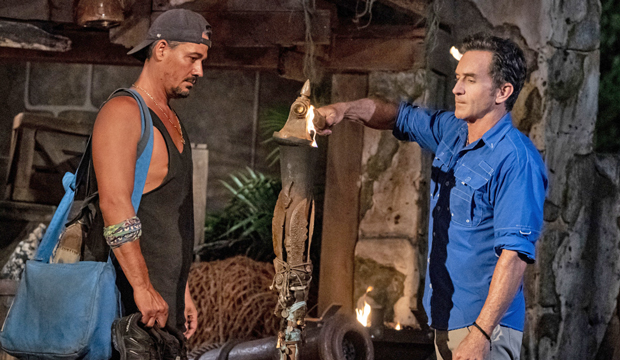 Casualty
Boston Rob Mariano had a system without a buddy
Boston Rob won “Survivor” by implementing “the buddy system.” It’s where his alliance members were always accompanied, so any signs of disloyalty could be reported to Rob. This episode’s tribe swap saw Rob’s old Sele tribe hold the majority of 3 to 2. After losing the challenge, he planned with Ben Driebergen and Adam Klein to vote out Sarah Lacina. He then made them all sit in the shelter until tribal council. There was no chance for Sophie Clarke or Sarah to talk with the boys. As Sarah said, it was “the buddy system on steroids.”

SEE‘Survivor’ sneak peek video: Can you figure out this Edge of Extinction clue before Boston Rob? [WATCH]

This time, it didn’t work; everyone voted Rob out. The problem was that these two were no buddies of the godfather. Rob, unnecessarily, had intimidated Ben at a tribal council and he had blown up Adam’s gave to save Parvati Shallow. In an earlier episode Rob, rightly, lambasted Adam for not adapting to the game. He asked, “Is this kid crazy? He’s seen every episode. I don’t play like that.” Part of  playing “Survivor” is being adaptable and aware of the people you are with. Rob should have known that Ben and, especially, Adam would not be amenable to “the buddy system.” Even if this was a good strategy, he needed to implement it as soon as the swap happened; not after Ben and Adam had already started plotting with the girls.

With such a fractured group Rob should have been the first to make the move against his former tribe mates. He could have highlighted that he was on the outs at his former tribe and less likely to reconnect at the merge. Unfortunately, Rob has never shown an ability or willingness to play the game as a swing vote. He always has to be controlling the game from the top. And as far as exhibiting controlling tendencies Rob is the godfather. When with the right people he lasts the full 39 days, like in “All Stars” and when he won on “Redemption Island.” His failure to adapt when things are against him has seen him voted out before the merge the other three times he’s played.

Who won the battle and war?
Sophie looking better every week
This week the big winners were Sarah and Sophie. They went into their tribe swap down in numbers and flipped Adam and Ben to vote out Boston Rob. With the buddy system they had to rely on visual cues like winks to get a read on the situation. They read the boys so well they knew not to waste their advantages. Both played an amazing game, but Sophie wins the week because she was able to find an idol.

Going into the tribe swap I believed Sophie was best placed to win. Finding an idol and coming out on top only improves her position. Gold Derby odds reflect this, as she is still in first with a strengthened 11/1 odds.

This all being said we have two tribes going to tribal council this week with four idols and two advantages in the game. The merge is also on the horizon. So there are plenty of opportunities for other players to make their moves.