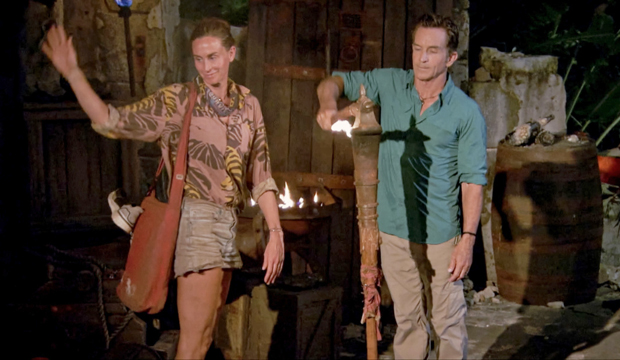 “Survivor: Winners at War” sees 20 winners return to duke it out. It’s the greatest crop of contenders the game has ever seen. In my weekly “Battlelines” recap I will diagnose the casualty, declare who I think won the episode’s battle and who is best positioned to win the war. Please feel free to give me your thoughts in the comments below.

Battlelines redrawn again
We saw a recalibration of the battlelines after Tony Vlachos, Nick Wilson, Jeremy Collins and Michele Fitzgerald voted against Sarah Lacina, Ben Driebergen, Kim Spradlin and Denise Stapley to blindside Sophie Clarke. While Tony and Sarah patched things up, Nick made a final three deal with Michele and Denise. The three seemed on board with Kim’s plan to take Tony out. Ben was in the loop, but considering options. Tony winning immunity meant we didn’t see if these new alliances would hold. There was a consensus for Jeremy but, again, Tony threw a spanner in the works at tribal. And Kim was his target. Tony, Sarah, Ben, Nick and Jeremy voted her out. Denise and Michele were on the wrong side of things; however the latter gave Jeremy an advantage. If these battlelines hold Denise looks in trouble, but with the Ben and Jeremy feud escalating this seems unlikely.

SEE‘Survivor’: Pssst … Are you tired of all that rude Tribal Council whispering and yakking? We sure are! [POLL]

Casualty
Kim crashes coming for the king
Fans of “The Wire” know “when you come for the king, you best not miss.” This episode Kim was determined to get Tony out. It made sense after two weeks of him dominating. But when he won immunity she had to put that plan on the backburner. Instead it backfired. Ben leaked the plan to Tony, who caused chaos at tribal to send Kim home. Tony has shown the effectiveness of sitting on a plan til just before tribal. It limits the window for things to go wrong. Ultimately, Kim included one too many people in the plan and set the wheels in motion too early. Tony wasn’t coming for Kim until he found out she was targeting him. “When you come for the king, you best not miss.”

Kim is one of my all-time favourite “Survivor” players. Her win may be the closest to a perfect game we have ever seen. She won challenges, found an idol (that she didn’t need), controlled every vote and showed incredible social finesse. This season we saw her in a different position, on the bottom. And we learnt that on the other end of the spectrum her social abilities were still strong. As a big threat she avoided being the target, even with numbers against her. She built strong social bonds across alliances and had incredible reads – she could tell Tony was dangerous before anyone else.

However, we also learnt that Kim is not infallible. She was often out of the loop and her game had a few mistakes. She wasted an idol on Denise (which would have saved her this episode). She stepped down from an immunity challenge for peanut butter the episode she was voted out – a week after being on the outs! And when she found out Ben had leaked to Tony, she didn’t use that info to try and break up the Tony/Sarah/Ben trio.

Who won the battle?
Tony takes down the coup leader
For the third week in a row Tony wins the battle. He patched things up with Sarah, won immunity, caught Nick in a lie and took out the person who was gathering troops against him. He also built a spy nest! In his winning season, Tony was famous for the spy shack and a bag of tricks. And his bag of tricks was back. He reached into it and offered to play an idol for Sarah. She turned it down, which means he still has an idol. I love this move. It puts everyone on notice. Tony might play an idol on himself or Sarah: think twice about voting for either of them.

Something I failed to highlight last week is Tony’s relationship with Jeremy. When Jeremy was on the outs with everyone it was Tony who got alongside him and framed the tribe dynamics. He wasn’t totally honest and was still plotting against Jeremy. But it gave him options as the game progressed. He’s now saved Jeremy twice. And, for now, I think both of these top threats need each other. If either goes, the other is an obvious boot.

Tony’s precarious position is that the more he looks like winning the more danger he’s in of being voted out. His idol helps and he has a great shot to prevail. But the pessimest in me is still worried that these former winners won’t let him get to the end.

Who is winning the war?
Michele may have found the sweet spot
Nick explained this week the three people he can’t beat are Tony, Jeremy and Sarah. That seems to line up with the games we’ve seen played. If any of them make it to the end, one likely wins. However, there is a good chance the others will realise that and not let them get there. So if these three get taken out, who wins? Of the remaining four Denise has made one of the season’s biggest moves by taking Sandra Diaz-Twine out with her own idol, but I still think Michele’s social game might win out. In the last two episodes we’ve seen Michele work with Jeremy and Tony. She also made a final three deal with Nick and Denise. She isn’t a big threat, so stands a great chance of getting to the end. We’ve seen her build strong relationships with many players and not burn bridges. Sitting next to the right people she could do very well. To win Survivor you just need to to two things. Make it to the end and win the jury vote. Michele is unlikely the most likley to do either, but the most likely to do both. She’s in a pretty sweet spot. She currently sits second most likely to win at Gold Derby at 19/5 odds (Tony remains first at 29/10).