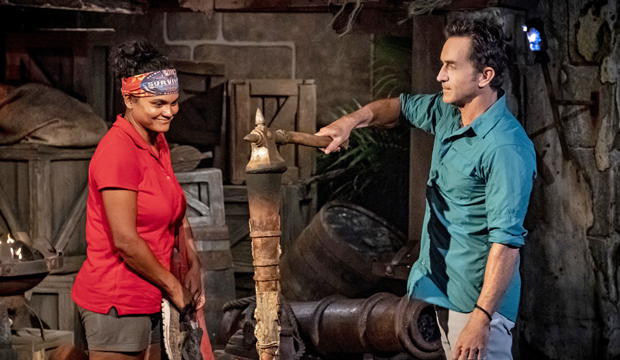 Casualties
A pair of Queens flushed out of the game
It was a brutal week in “Survivor” as two of the game’s greatest characters and players were voted out: Sandra Diaz-Twine and Parvati Shallow. Both were returning winners in season 20 for “Heroes vs. Villains” and we’re able to snag 1st and 2nd place respectively. So, what went wrong for these “Survivor” legends?

I’ll start with Sandra. Let me quickly say, going into this season I thought she was the greatest “Survivor” player of all time. Her “anyone but me” strategy has already won this contender the game twice. Winning “Survivor” is hard, doing it twice seems nearly impossible. Nothing she did this season could take away from her status as an all-time great. That being said, this episode she made a huge blunder.

No one was safer than her this episode. Post-swap her old tribe had a 3-2 numbers advantage and she had an idol that could only be used for one more tribal. After losing the challenge she knew where most votes were going and could play her idol in case another one was played. But, while Tony Vlachos was potentially blowing up his game with paranoia by hiding in spy bunkers, Sandra actually blew up her game with overconfidence. She didn’t want to keep all the big targets in the game (which seems like a miscalculation as there is no bigger threat than Sandra). So she gave Denise Stapley the idol for a fire token. To cover her tracks Sandra votes Denise as well, knowing it would be cancelled out. Sandra gave Denise, someone who she only just started playing the game with, all the power. She abandoned her “anyone but me” strategy and adopted an “anyone but Denise” strategy. For this she paid the ultimate price.

Does this hurt Sandra’s legacy? My gut says it does, but only a little. She went into the season the greatest player and this is the first big blinder we’ve ever seen from her. It reveals a vulnerability to her game we had not seen before. That all being said, no “Survivor” player is perfect and with her two wins I’d still be inclined to call her the greatest, for now.

SEE Jeff Probst (‘Survivor’) wonders if Sandra has any ‘fight’ left in her: Will she raise the mast at Edge of Extinction? [WATCH]

Parvati entered the week in a much more precarious position. She was swapped into a tribe where three men from the other tribe held a numbers advantage. She also had no advantages or idols. In the episode she did get an idol nullifier from the Edge of Extinction. However, this advantage is only useful when you are in the majority.

Could Parvati have done anything to save her skin? Possibly. She could have turned on her ally Michele Fitzgerald. She also could have pretended her nullifier was an idol so they didn’t put votes on her. In hindsight these ideas were probably worth a go. But it’s impossible to know if they would have made a difference. Parvati got swap screwed, and it’s a shame for such a big threat to go down that way. She played one of the most dynamic winning games in “Micronesia” heading up the “Black Widow Brigade” and returned as the biggest threat in “Heroes vs. Villains” to score 2nd place. Her legacy remains intact and I hope she is able to re-enter from extinction.

Who won the Battle?
Humble warrior Denise Stanley slays the Queen
Denise didn’t just make the season’s biggest move to date, she made one of the biggest moves in “Survivor.” She was able to idol out the only two-time winner of the game – with her own idol! It was nothing short of savage. And Denise played it perfectly. She was so unassuming and humble all afternoon. Downplaying her threat and behaving like she willing to go along with anything. It got Sandra’s guard down. And to execute her plan Denise didn’t need to get anyone else involved. All she needed to do was write down Sandra’s name. As insurance Denise played her other idol on Jeremy Collins to make sure Sandra would be the one going home. Denise let the game come to her but and when it did she made sure to leave her mark on “Survivor” history. No question Denise won this week’s battle, but will she win the war? It’s hard to say. There’s a chance this makes her into such a big threat it will be hard to continue her unassuming gameplay. Only time will tell.

Who’s winning the war?
Yul Kwon continues to look impenetrable.
Since I started this blog I’ve been saying Sophie Clarke is best positioned to win. And I still believe that to be the case. However, we didn’t get to see much of her tribal dynamics this week. Of the two tribes that voted this week, Yul looks best placed to take out the title. By getting rid of Paravti, his alliance now holds a 3-1 advantage on their tribe. If they lose he should be safe. He also has plenty of allies on the other tribes as well, so he is well placed for the merge. Yul’s name hasn’t come up once this season to be voted out. Impressive for such a strategic and physical force! Currently, Gold Derby has him in second place (behind Sophie) at 7/1 odds.