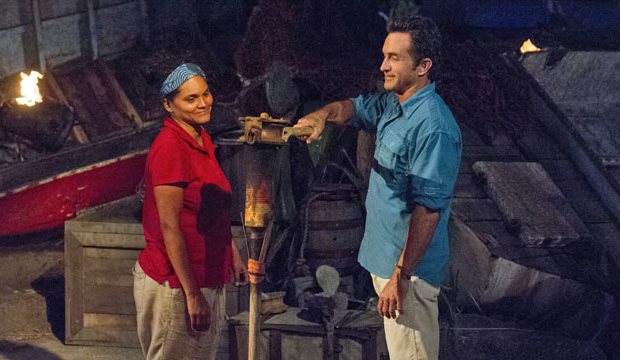 OK, folks. We sort of saw this coming. Let’s just say the Queen wasn’t quite her smooth criminal self this time around. I mean, at one point, she tried to position herself as a provider by showing her tribe mates an easy way to catch fish with a net. In the past, she has been more of a conniver than a nurturer. Perhaps it was the fact that Sandra Diaz-Twine, the only two-time winner of “Survivor” who has participated in five seasons, was up against other past champs, who had their own bag of tricks. Or that she relished every opportunity to sit out challenges requiring physical feats when the rival tribe had fewer players.

Then there was her declaration on the third episode of “Survivor: Winners at War” when Sandra told us, “Here I am for the fifth time, and once this is over, I’m retiring from the game. So this season I’m going to switch gears. I want to prove my word to this tribe.” She felt secure enough at first when her Dakal tribe only participated in one vote. But when the two tribes became three, Sandra was more exposed among fewer players.

SEE‘Survivor: Winners at War’: Does Denise’s epic blindside of Sandra make her the new queen? Not until she wins, say 32% of fans [POLL RESULTS]

That is when Denise Stapley, who won season 25, pulled a fast one on the Queen when she made a deal to buy Sandra’s soon-to-expire immunity idol with her two fire tokens without revealing she had an idol of her own that she also used to bring the her down. At least the royal one went out in epic fashion thanks to her underestimation of her opponent.

This week’s episode began with Sandra landing on the Edge of Extinction beach at night and calling out, “Guess who?” She’s greeted by the other seven other old-school players stuck in limbo including Parvati Shallow, Rob Mariano and his wife, Amber Mariano.

SEE‘Survivor’ 40 episode 7 recap: Who was voted out in ‘We’re in the Majors’?

Sandra stumbles in the dark near the fire and greets the current residents of Edge of Extinction by saying, “Guess who?”  Parvati gives her a hug as the most recent exile says, “I screwed myself!” Sandra tells a slightly glorified account of her deciding to give her idol to Denise, saying she didn’t want to see another female booted out

What Her Highness leaves out is that she asked Denise give her two fire tokens – one now and one later — in exchange for the idol so she herself would benefit somehow. When Rob questions why she didn’t use the idol for herself, Sandra confesses, “It sucks that I played with my emotions. I said I would just play a strategic game. But in hindsight, at the end of the day, I’m still human. I have feelings. I felt something for Denise. And it just bit me in the butt.”

SEE‘Survivor’ showmances: Top 10 sexiest of all time include Rob and Amber

Is that all that true or is it a bit of a cover-up? It doesn’t really matter once Sandra learns that each player stranded on the Edge gets just a cup of rice a day plus they have to hike up a mountain to get it. “You don’t have to convince me,” she says. “I already knew that it’s not for me. Sorry, y’all. I can’t be here. I’m not going to sit here for 23 days trying to fight my way through a challenge to get back in. It ain’t going to happen.” Her final words? “I’ve done everything that I could possibly do in the world and in the game of ‘Survivor.’ “

Whether you love or loathe Sandra, you must give the lady props for being one most memorable, colorful and influential players on the show. We will soon witness what happens when another castaway is dubbed the second two-time winner on the show when season 40 ends. Will the Queen still be the Queen? We will see.