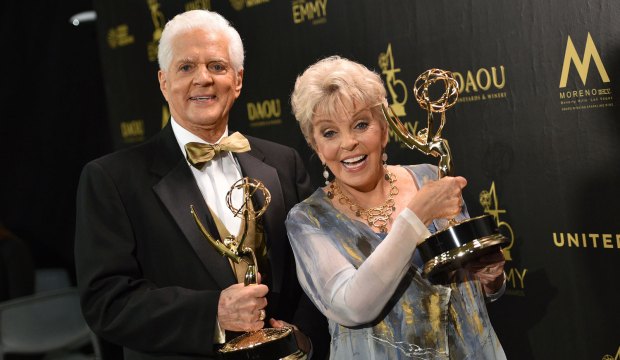 Susan Seaforth Hayes is one of the longest-serving actors in “Days of Our Lives” history with six Daytime Emmy nominations spanning an extraordinary 52 years on the NBC serial as Julie Olson Williams. This year she’s up for Best Supporting Actress for her performance, and she could achieve something the late, great Jeanne Cooper previously pulled off: winning a competitive acting Emmy after receiving her Lifetime Achievement Award.

Cooper played Katherine Chancellor on “The Young and the Restless” for 40 years: from 1973 until her death in 2013 at age 84. She was a frequent Best Actress nominee at the Daytime Emmys but went decades without winning. In 2004 she received a Lifetime Achievement Award for her contributions to daytime TV. But a few years later she finally won a competitive prize on her ninth try: Best Actress in 2008.

Seaforth Hayes has had a similar trajectory. She earned Best Actress noms in 1975, 1976, 1978 and 1979. Then she dropped off Emmy voters’ radar for 39 years until 2018 when she was nominated for Best Supporting Actress and won the Lifetime Achievement Award alongside her husband and longtime co-star Bill Hayes. She didn’t win the competitive prize (Camryn Grimes prevailed for “Y&R”), but she’s back with another Best Supporting Actress bid this year.

The actress discussed the scenes that earned her this nomination with soap journalist Michael Fairman. “I submitted when Julie dies,” she explained. “I submitted the farewell montage scenes with Bill Hayes, and they were very moving to us … and we’ll see. I did not submit anything snappy, or bitchy, or hysterical. I’ve lost against hysterical every time. Comedy has never worked. So I am going to try the heart and soul of soap opera: not bitchiness, but loss.”

It wasn’t permanent loss, though. Julie survived her close brush with death after receiving a heart transplant from Stefan DiMera (Brandon Barash), who had just been shot and killed. On soaps, you never know whose heart you might wake up with, or if it could win you an Emmy a half century in the making.