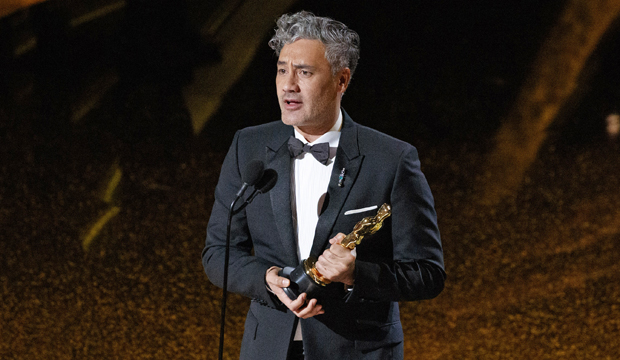 While 2020 has not been the best experience for most of us, it has been very good for Taika Waititi. He started off the year winning several awards for his World War II satire “Jojo Rabbit,” culminating in an Oscar win for Best Adapted Screenplay. Now, the New Zealander is looking to keep his awards winning streak alive at this year’s Emmys, where he’s nominated in the Best Voice-Over Performance category for “The Mandalorian” at Thursday’s ceremony. He’s also up for Comedy Series as the executive producer of “What We Do in the Shadows.” To claim this prize, he’ll have to beat back challenges from two previous winners in the category, another two under-recognized veterans and a rising star who’s already a Tony and Grammy winner.  Below, let’s take a look at each of this year’s nominated performers and what they’re being recognized for.

Waititi is nominated for voicing the droid, IG-11, in the season one finale of the Disney+ series, “Chapter 8: Redemption.” After the Child (or “Baby Yoda,” as he’s been called) is taken by two scout troopers, IG-11, now re-programmed from being an assassin droid to a nurse droid, reclaims the Child and returns him to the Mandalorian. The Mandalorian, along with Cara (Gina Carano) and Greef Karga (Carl Weathers) get surrounded by stormtroopers and IG-11 helps to fight them off. When the Mandalorian is badly injured, IG-11 helps heal him and the entire crew escapes through a storm drain. The group board a barge on a river of lava to escape, only to find an army of stormtroopers waiting to ambush them. IG-11 chooses to sacrifice himself to save the Child. He walks through the lava to the stormtroopers who start shooting at the droid. IG-11 self-destructs, killing all the stormtroopers and ensuring safe passage for the group helping the Child. Waititi gives IG-11 a very monotone voice, but manages to deliver his lines with just the right tint of emotion, which helps to make his ultimate sacrifice all the more meaningful. It’s a strong entry that could very well be a winning one.

SEE4 Emmy-nominated editors from ‘The Mandalorian’ reveal what makes the ‘Star Wars’ series unique: ‘There is a lot of individuality to all of the episodes’ [EXCLUSIVE VIDEO INTERVIEW]

Leslie Odom, Jr. earns his first Emmy nomination for playing Owen Tillerman, the manager of Central Park, on the AppleTV+ series, “Central Park.” Odom has selected the pilot as his submission. We first see Owen getting really excited for the annual blooming of the Hot Lips Turtleheads in the Park. Wealthy socialite, Bitsy Brandenham (Stanley Tucci), loses her dog in Central Park and offers a $55,000 reward for its return. This causes people to look all over the Park for the dog and the Turtleheads end up getting destroyed. Afterwards, Owen runs into his son, Cole (Tituss Burgess) and discovers that he’s been holding on to the missing dog since the previous day. Owen and Cole bring the dog back to Bitsy. Back at their home in the Park, Owen reads the article his wife wrote about how the search for the dog ruined the newly-bloomed Turtleheads. Odom’s already a Grammy and Tony winner for his work on the show, “Hamilton,” and this episode does a great job showcasing his talents. It builds a good foundation for his character and gives him three songs to be a part of: “Own It,” “Poops I’ll Pick it Up” and “Shampagne Was My Best Friend.” Still, you’d think he’d have a better chance of winning if he had submitted an episode where he gets a stand out number all to himself.

Hank Azaria returns to this category once again for his work on “The Simpsons.” He’s nominated for the 13th episode of the 31st season, “Frinkcoin.” Prof. John Frink gets wealthy with his newly developed cryptocurrency. When his newfound wealth doesn’t bring him happiness, Homer brings him to Moe’s. At first, he seems to be making friends fast at the bar but Frink soon sees his new compatriots are taking advantage of him. When Mr. Burns tries to develop a rival cryptocurrency, Frink ends up helping him so that he doesn’t have to deal with people pretending to like him anymore. Azaria does a great job in giving Frink an episode-long story and also gets to voice Moe, Cletus, Carl, Chief Wiggum, Kirk Van Houten and the Sea Captain. He is never one to be underestimated at the Emmys, both in this category and any other one that he’s nominated in. He’s won this prize four times before (1998, 2001, 2003, 2015) and has another two Emmys for acting on-screen.

SEEYes, Baby Yoda (‘The Mandalorian’) was nominated for Emmy Awards, and that’s the tea

Like Maya Rudolph, Wanda Sykes also has three nominations this year. She finds herself with her first nomination in this category for the return of Comedy Central’s infamous show, “Crank Yankers,” in which puppets re-enact comedians making prank phone calls. Sykes is nominated for the episode, “Bobby Brown, Wanda Sykes & Kathy Griffin.” She appears in the very beginning of the episode reprising the character of Gladys, who she voiced during the show’s original run. Gladys calls the patent office looking to trademark the phrase, “That’s what she said,” claiming that she’s the woman being referenced in the saying. The conversation goes back and forth with the woman at the patent office not really being familiar with it and Gladys repeatedly trying to get her to understand how it’s supposed to be used. Gladys offers to give the receptionist a cut of the money if the trademark is approved but gets hung up on. Sykes is no stranger to the Emmys as this is her 14th nomination and she claimed a trophy as a writer for “The Chris Rock Show” in 1999. It’s also a funny bit but it would feel weird if she were able to pull off a victory for a bit that doesn’t even last more than two-and-a-half minutes.

Rounding out this year’s competition is Nancy Cartwright from “The Simpsons.” Cartwright is nominated for “Better Off Ned,” the 16th episode of the show’s 31st season. When Bart pulls a prank at Springfield Elementary using a dud grenade he is almost expelled, until Ned Flanders intervenes and offers to be a mentor to Bart. As Bart betters himself through Ned’s teachings, Homer becomes jealous and decides to become a mentor to school bully, Nelson Muntz, which makes Bart jealous. Later, Homer breaks off his mentorship with Nelson, which causes Nelson to take revenge on Bart. Homer realizes this plan and manages to save Bart from getting crushed while getting badly injured. Nelson rides in the ambulance with Homer and Homer recommends Nelson to be mentored by Ned. This is Cartwright’s third career Emmy nod. She won in 1992 when the honor was a juried award. She gets a great range of characters to portray. In addition to Bart and Nelson, she also gets to voice Ralph Wiggum and Todd Flanders.