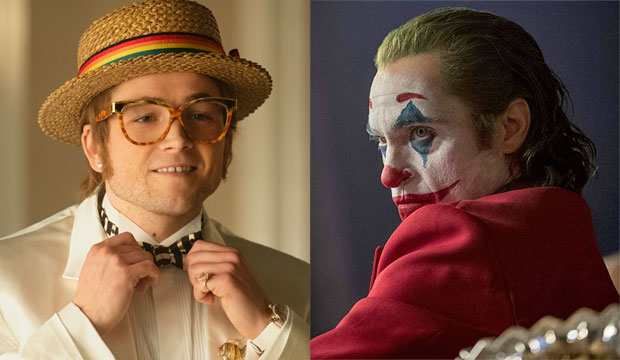 Joaquin Phoenix (“Joker”) has dominated this awards season, winning at the Golden Globes, Critics’ Choice Awards and SAG Awards among other plaudits. He’s the front-runner at the BAFTA Awards on February 2 too, but a couple of the Expert journalists we’ve polled think Taron Egerton (“Rocketman”) will pull off an upset. Could they be right?

As of this writing 14 Experts are predicting a victory for Phoenix, but Eric Deggans (NPR) and Susan King (Gold Derby) say it’ll actually be Egerton. He’s one of the few lead actors besides Phoenix who has had a chance to give an acceptance speech at a televised awards ceremony this season: he won Best Film Comedy/Musical Actor at the Globes while Phoenix won the dramatic category.

Also, Egerton is a British actor playing a British icon (singer Elton John) in a British movie (nominated for Best British Film) by a British director (Dexter Fletcher). Suffice it to say that it might be popular with the British film academy that decides the BAFTAs.

But you don’t always have to be British to win. The BAFTAs often match the Oscars American for American. In recent years both groups agreed on Leonardo DiCaprio (“The Revenant,” 2015), Casey Affleck (“Manchester by the Sea,” 2016) and Rami Malek (“Bohemian Rhapsody,” 2018), all Yankees. And not only is Phoenix the Oscar front-runner for Best Actor, “Joker” is the nominations leader at both the Oscars and BAFTAs with 11 bids at both events. So it’s possible that both academies will prefer Gotham to Britain.