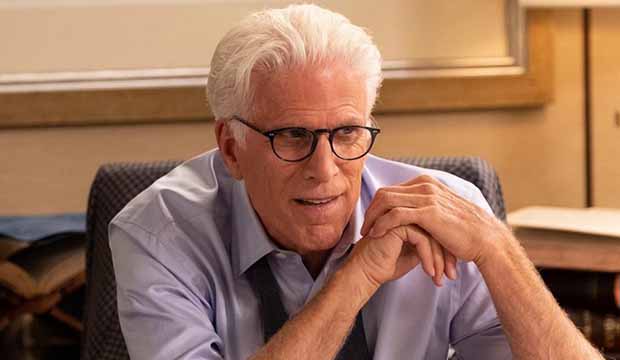 Is Emmy history about to repeat for Ted Danson? A whopping 27 years ago he took home the Best Comedy Actor trophy for the last season of NBC’s “Cheers,” and now he can win thanks to the final season of the peacock’s “The Good Place.” In fact, 4 of our 18 Emmy Experts from major media outlets predict it will happen: Jen Chaney (Vulture), Eric Deggans (NPR), Ben Travers (Indiewire) and Matt Webb Mitovich (TVLine). Do you agree or disagree with these savvy prognosticators? Make your 2020 Emmy predictions right now.

Danson was nominated seven times for “Cheers” for his role as bartender Sam Malone (1983-89) before finally winning in 1990. He then had two more losses (1991-92) prior to his 1993 victory for the show’s final season. The beloved actor returned to the Best Comedy Actor category in 2018 and ’19 for his role as demon Michael on “The Good Place,” losing to Bill Hader (“Barry”) both times. However, Hader is not eligible this year as “Barry” is currently on an extended hiatus.

SEEEmmy’s parting gift for ‘The Good Place’ could come in writing or directing, just like ’30 Rock,’ ‘Larry Sanders Show’ …

The other two Experts are going rogue in their Emmy predictions: Jazz Tangcay (Variety) chooses Michael Douglas (“The Kominsky Method”) and Peter Travers (Rolling Stone) opts for Ramy Youssef (“Ramy”). Both actors are coming off recent triumphs at the Golden Globes, with Douglas prevailing in 2019 and Youssef claiming gold earlier this year.

In the heralded series finale of “The Good Place,” Danson’s character Michael feels the agony of loneliness after his favorite test subjects — Eleanor (Kristen Bell), Chidi (William Jackson Harper), Tahani (Jameela Jamil) and Jason (Manny Jacinto) — ultimately decide to leave the afterlife. Eleanor manages to convince the Judge (Maya Rudolph) to let Michael live on earth as a human, which serves as the touching last scene. “Take it sleazy,” says the demon-turned-human as the final credits roll.