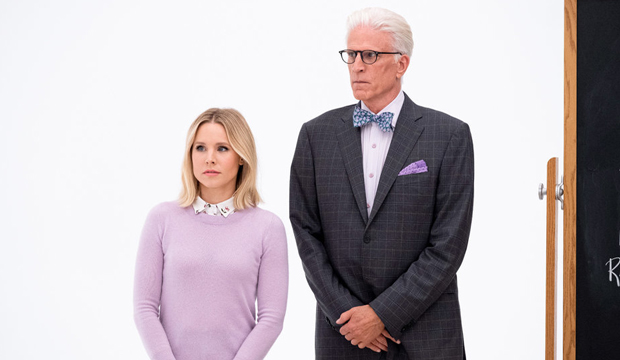 While the majority of Gold Derby’s Emmy Experts are predicting a win for Eugene Levy (“Schitt’s Creek”) in Best Comedy Actor, this category is ripe for an upset. Of our 20 prognosticators from major media outlets, one goes rogue in predicting Ted Danson (“The Good Place”) will actually win. It wouldn’t be the first time the legendary TV actor prevailed for his show’s final season — after all, he did the exact same thing for another NBC comedy in 1993.

Danson was nominated seven times for “Cheers” as bartender Sam Malone before finally winning in 1990. He then had two more losses prior to his 1993 victory for the show’s farewell year. The beloved actor returned to Emmy’s lead actor category in 2018 and 2019 as a demon named Michael on “The Good Place,” losing to Bill Hader (“Barry”) both times. Hader’s show didn’t air this year, which opens the door for someone else to take the trophy. The 2020 line-up for Best Comedy Actor is Danson, Levy, Ramy Youssef (“Ramy”), Don Cheadle (“Black Monday”), Michael Douglas (“The Kominsky Method”) and Anthony Anderson (“Black-ish”).

In the critically acclaimed series finale of “The Good Place,” Danson’s character Michael feels the agony of loneliness after his favorite human test subjects — Eleanor (Kristen Bell), Chidi (Harper), Tahani (Jameela Jamil) and Jason (Manny Jacinto) — ultimately decide to leave the afterlife. Eleanor manages to convince the all-knowing Judge (Rudolph) to let Michael live on earth as a human, which serves as the touching last scene.

Here are the Best Comedy Actor winner predictions for all 20 Emmy Experts: