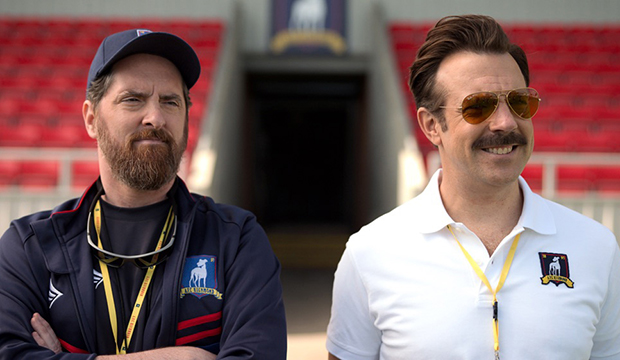 “Ted Lasso” has been climbing the charts quietly. The half-hour comedy from “Scrubs” and “Spin City” showrunner Bill Lawrence premiered on Apple TV+ in August, but it has already been renewed for both a second and a third season. It arrived on the streaming service without the fanfare of the star-studded “The Morning Show” last year, but the glowing reception from general audiences has made “Ted Lasso” a sleeper hit. Apple might now be on its way to the Golden Globe Awards success that eluded its flagship drama’s debut last year.

The England-set sitcom is now finally predicted aggregately for a Best Comedy/Musical Series nomination to complement the Best TV Comedy/Musical Actor nomination that has long been predicted for Jason Sudeikis as the titular sports coach. It sits in fifth place, behind “Schitt’s Creek,” “The Great,” “Ramy” and “What We Do in the Shadows.” Three of Gold Derby’s Editors even predict the show to win both prizes, with the other seven predicting Editors favoring a rubber-stamping of historic Emmy sweeper “Schitt’s Creek” in the Best Comedy Series race, although the Globes have not previously nominated that show.

A win for either would be a vote for escapism. Cynical comedies have been in vogue for years, which checks out for the big breakthroughs that are expected for the likes of “The Great” and “Ramy” in the field. Sudeikis presented the Emmy for Best Comedy Series in September to showrunner and star Daniel Levy, who called “Schitt’s Creek” a show with “love and acceptance” at its core. Sudeikis could use the same words in an acceptance speech for “Ted Lasso” (for his work in front of or behind the camera). These are stories in which even the bad guys are good, which might be just what the doctor ordered in these uncertain times.

A high 8.7 rating on IMDb ranks “Ted Lasso” just outside the top 100 across all formats and genres of best television programs ever. Even the critics are jumping on the bandwagon after an unremarkable initial critical reception. Advance reviews yielded a mere score of 71 on Metacritic, but that aggregate reviews site is now tallying it on more year-end top 10 lists from critics than any other comedy at the time of this writing.