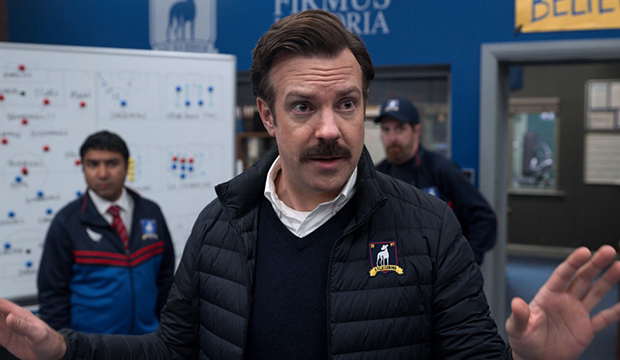 On “Ted Lasso,” Jason Sudeikis stars as a folksy American football coach in Kansas City who is recruited to coach an English Premier League soccer team. It’s a delightful fish-out-of-water story, as lovable Ted, who knows little to nothing about soccer is thrown in the deep end but takes on the challenge with irresistible enthusiasm.

The show’s 10-episode freshman season premiered Aug. 14 on AppleTV+ to positive reviews and increasing buzz. Five days after its premiere, Apple renewed “Ted Lasso” for a second season, a sign that the streaming service sees potential for the show long term. It has scored a respectable 71 at Metacritic and is certified fresh on 86 percent at Rotten Tomatoes, which lauded the show for its “unrelenting optimism” and Sudeikis’ “charming turn.”

“Ted Lasso” is currently in seventh place at 30/1 in our Golden Globes odds for Best Comedy Series and its leading man is in third place with 5/1 odds. I think Sudeikis should actually be in pole position for a nomination and a potential win. Here are four reasons why.

1. “Shiny new toy” syndrome
The Golden Globes have a long history of embracing new shows. To put it bluntly, they’re suckers for shiny new toys and among the shiniest and newest TV offerings this year is “Ted Lasso.”

While it will be competing against older shows like “Schitt’s Creek,” “Insecure” and “Dead to Me,” the only new shows that are realistically in contention at the Globes are “The Great” and “Zoey’s Extraordinary Playlist,” both of which received Emmy nominations this year, unlike “Ted,” which debuted outside of Emmy eligibility and therefore still sparkles as a new show that the Hollywood Foreign Press Association can claim as its own discovery as voters often put brand new shows on the crowded TV awards radar, like “Glee,” “Girls” and “Brooklyn Nine-Nine,” to name a few.

The stakes are high for Apple, as the Globes are the first real awards test for “Ted Lasso” because the way it performs at the Globes may well determine its overall awards potential going forward.

2. The Golden Globes are nuts for lead actors on first-year shows
If we assume that “Ted Lasso” is a genuine contender at the Globes, then Sudeikis should be right at the top of your predictions. They have a soft spot for lead actors in new comedies. Earlier this year, the Globes put Ramy Youssef on the awards map after “Ramy” was shut out at the Emmys last year. Looking further back, actors in debut comedies have done extraordinarily well at the Globes. Veteran Michael Douglas (“The Kominsky Method”) won in 2018; Donald Glover (“Atlanta”) in 2016; Jeffrey Tambor (“Transparent”) in 2015; and Andy Samberg (“Brooklyn Nine-Nine”) in 2014.

Other actors from new shows in contention include Robbie Amell (“Upload”), Dave Burd (“Dave”), Domhnall Gleeson (“Run”) and Rob McElhenney (“Mythic Quest”). But none of them have the profile of “SNL” alum Sudeikis.

“Schitt’s Creek” star and Emmy champ Eugene Levy currently tops our comedy actor odds, but the show has never been nominated for a Globe. Even if it does pick up its first bids for its final season as expected, it’s also unlikely that “Schitt’s,” the comedy series favorite, will pull off a full sweep like it did at the Emmys since the HFPA hardly does sweeps, so that all works in favor for a first-year contender like Sudeikis.

SEE How did Apple TV+ do in its first year of Emmy contention?

3. Globe voters will want to invite AppleTV+ to the party
AppleTV+ is still relatively new on the scene, but in its first year in contention last cycle, it scored three nominations, all for “The Morning Show”: Best Drama Series and one each for its leading ladies Jennifer Aniston and Reese Witherspoon. With that show not eligible this cycle, the HFPA will be looking elsewhere to give the streaming service some love. The Globes are known for sharing the wealth, spreading out its nominations and wins across multiple networks and platforms so that everybody is invited to the “party of the year.” Other than possible nominations for limited series “Defending Jacob” or maybe fellow comedy stablemate “Mythic Quest,” the streamer’s bench looks like relative slim pickings.

Also, remember that the Globes love streaming comedies. Amazon won the Best Comedy Series category two years in a row with “Transparent” (2014) and “Mozart in the Jungle” (2015), and has since pocketed wins for “The Marvelous Mrs Maisel” (2017) and “Fleabag” earlier this year, while Netflix won for “The Kominsky Method” (2018) in between. Other recent nominated comedies include Netflix’s “Master of None,” “Orange Is the New Black” and “The Politician,” and Hulu’s “Casual.”

4. The HFPA loves “British” comedies
“Ted Lasso” is an American show, but it has a decidedly British sensibility, with a predominantly British cast, set in the mother country. Phoebe Waller-Bridge‘s smash hit “Fleabag” won big at the Globes earlier this year, following its Emmy success in 2019. “Episodes,” a U.S. and U.K co-production, scored consecutive nominations for Best Comedy Series in 2011 and 2012, while leading man Matt LeBlanc won Best Comedy Actor in 2011 and was nominated again the following year. And don’t forget, Globe favorite and frequent host Ricky Gervais first hit the American awards scene back in 2003 when his original version of “The Office” pulled off an upset there by winning Best Comedy Series. 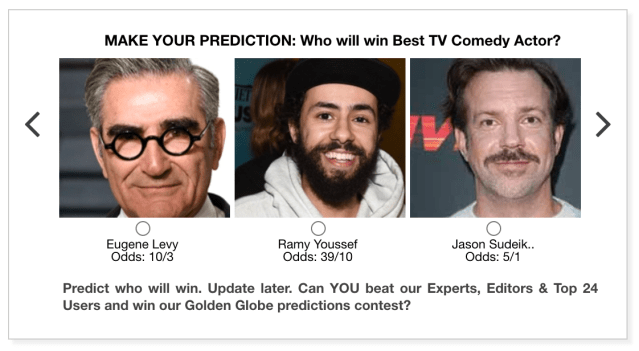