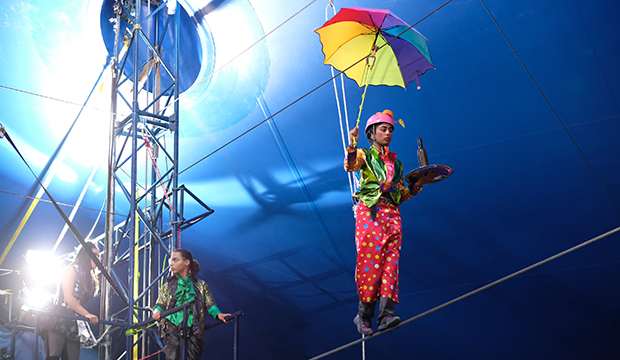 There’s no rest for the weary or racers as the top 10 head to Bogotá, Colombia, on Wednesday’s episode of “The Amazing Race 32” after being told to keep on racing at the first leg Pit Stop. And the surprises keep coming: After eliminating a team on a no-rest leg for the first time (we hardly knew ye, Nathan and Cody), the Yield will make its (triumphant?) return following a 13-year absence.

The Yield — which, in case you forgot, allows teams to stall another one for a specified amount of time — was introduced in the fifth season and last appeared in the 11th one, the first all-stars installment, in 2007. It was replaced the following season by the U-Turn, which, arguably, is more exciting since you get to see teams, you know, do things instead of just sitting around. But Phil Keoghan did say this season was “back to basics,” so this is a nice throwback.

The first leg ended with married parents Chee and Hung nabbing first place after passing sisters Michelle and Victoria at the Roadblock, where the two most high-profile teams, Olympic hurdlers Kellie and LaVonne, and former Carolina Panthers teammates DeAngelo and Gary struggled hard (along with Nathan and Cody). They survived in ninth and 10th place, respectively, so hopefully there’s an equalizer so they don’t fall too behind.

Below, check out our minute-by-minute blog of the episode “Red Lipstick is Not My Color.”

9:05 p.m. – At the end of the first leg of the race, teams were surprised to learn they’re still racing and have to immediately book a flight to Bogota, Colombia. They’re all on the same flight so any advantages from Leg 1 have been lost.

9:15 p.m. – Teams must now travel by taxi to the Nemocon Salt Mine. Once there they must search the underground tunnels which cover an area of more than two acres looking for a 10 or 20-minute hour glass, then sign up for a departure time in the morning. Their hour glass will give them a chance to halt another team for 10 or 20 minutes when they encounter a Yield in the race. Hung & Chee are first to arrive, once again leading the pack. They’re also first to sign up for their morning departure. All the teams end up huddling up in a bunker to sleep for the night, awaiting two different departure times: 6:00 and 6:30. When they wake up, teams will race on foot to Templo Parroquial San Francisco De Asis. One there they must climb the bell tower and and seek out gold or emeralds. They’ll then battle traffic back into Bogota and deliver their item to the appropriate person to receive their next clue.

9:20 p.m. – Riley & Maddison are first to find their gold item and head back towards Bogota. Ever the relentless duo, Hung & Chee pass them by and take the lead, but have trouble finding their broker that holds their next clue. Riley & Maddison have better luck, and leap back into first place. They must now travel by taxi to Escuela Nacional Circo Para Todos. This will be the first opportunity for teams to Yield each other. Hung & Chee are chasing them in second place followed by DeAngelo & Gary. Meanwhile, Kellie & LaVonne are in the back of the pack. To make things worse, their driver seems to be lost and his cell phone is about to die! The drama.

9:25 p.m. – DeAngelo & Gary take overtake Hung & Chee by a slight margin racing to the clue box. Both teams have choose not to Yield anybody before opening their Roadblock challenge. Competitors must join the circus, attempting the wheel of death and then walking on a tightrope with a tray of fragile glasses. DeAngelo decides to take this task for his team, while Hung attempts the tricks for hers. After being disoriented by spinning in the wheel, DeAngelo struggles on the tightrope but makes it on his first attempt. DeAngelo & Gary remain in first place and open their Route Info clue. Teams must travel by taxi to a designated address to find their next clue.

9:30 p.m. – Way in the back of the pack, it seems to be a battle for last place between Kellie & LaVonne and Kaylynn & Haley. Both are just now finally heading to the circus. Up in front, DeAngelo & Gary are the first to the next task. They must place a bunch of different decorations onto a truck, including attaching a horn to the front. Phil seemed pretty certain teams were not going to know how to connect the horn, so we’ll see how this goes!

9:40 p.m. – Despite being the second to last team to arrive at the circus, Kaylynn & Haley have chosen not to yield Kellie & LaVonne. That could be a $1 million mistake. Over at the truck decorating task, Hung & Chee once again finish first and retake the lead. They’ll be the first team heading to the next Pit Stop at Parque Nacional Enrique Olaya Herrera. DeAngelo & Gary are disappointed to be passed, but finished shortly after and still have a chance to win this leg.

9:45 p.m. – Hung & Chee finish in first place once again, this time winning a trip for two to Switzerland. DeAngelo & Gary finish second. More teams continue to finish decorating their trucks, while Will & James begin to get frustrated trying to figure out what’s wrong with theirs. Will refuses to show James the clue, insisting there is nothing in the clue that will tell them what’s wrong, not realizing they’re forgetting to hook up the horn, as noted in the clue. Yikes!

9:59 p.m. – More teams begin landing at the Pit Stop (the order is noted at the bottom of this blog). Lagging behind, Kellie & LaVonne are relieved to see so many teams still competing when they arrive at the truck decorating challenge. Will & James finally review their clue and realize they forgot to hook up the horn. Relief washes over them as they are given their clue to the next Pit Stop. Leo & Alana ran over to help Kaylynn & Haley, but lucky for Kellie & LaVonne, they were eavesdropping and realized they had to hook up their horn as well. Now it’s a tight race to the finish between Kaylynn & Haley, Kellie & LaVonne and Jerry & Frank. Bustling through traffic, Kaylynn & Haley get their first followed by Jerry & Frank. Unfortunately, Kellie & LaVonne are the last team to arrive. The track stars have been eliminated from “The Amazing Race.”