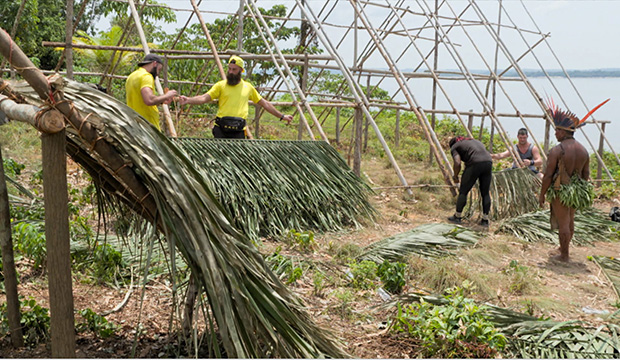 After the first full Pit Stop of the season, the remaining nine teams jet to Manaus, Brazil, on Wednesday’s episode “The Amazing Race 32,” which is moving to the 8 p.m. slot for the rest of the season. And the show can’t stop, won’t stop dropping in obstacles as the Double U-Turn awaits them.

That means two things: The Detour will finally make its debut this season, and this is the first time that the Yield and U-Turn are in the same season since the latter replaced the former starting in Season 12. We’re guessing the Yield, which was unused last week, is not in play this leg because that would be a lot. The episode is titled “We’re Makin’ Big Moves,” suggesting that the Double U-Turn will be used.

Tasks this leg include blowing darts, building a hut, and what appears to be a needle-in-the-haystack search at a market.

Leg 2 ended with Chee and Hung nipping DeAngelo and Gary for their second straight first-place finish. And they actually got a prize this time (let’s hope they were able to go to Switzerland before 2020). For the second consecutive leg, three teams struggled at the final task — including two of the same teams from the first leg — until Leo and Alana kindly shared some very important info, but Olympic hurdlers Kellie and LaVonne could not cross the finish line in time.

Below, check out our minute-by-minute blog of the episode “We’re Makin’ Big Moves.”

8:08 p.m. – Teams are now heading to Manaus, Brazil. Hung & Chee finished first in the last leg of the race and will head out first. It looks like all teams will be on the same flight, so the playing field has been evened. Will & James reveal that they would like to see Leo & Alana take a tumble. Meanwhile, Jerry & Frank are the last team to depart and hope to make up some ground on this leg of the race. At the airport, Will & James form an alliance with Riley & Maddison. They also like working with Hung & Chee, DeAngelo & Gary and Eswar & Aparna. It looks like a large alliance has formed on this season of “The Amazing Race.”

8:20 p.m. – The teams arrive in Brazil and rush to grab taxis to a local market. Eswar & Aparna are first to the clue box, learning they will have to pick up 11 items on a shopping list, all written in Portuguese. Then, a dock manager will confirm that they have the correct items and hand them their next clue. Michelle & Victoria and Jerry & Frank are struggling to find the first clue box. Meanwhile, up at the front of the pack, Riley & Maddison prove loyal to their alliance by helping various teams with the language. Will & James finish first, closely followed by Riley & Maddison and Eswar & Aparna. Now, teams must proceed to the Dessana Village, where they will witness a native hunting technique, who will help them get their next clue with a blow gun.

8:25 p.m. – As other teams begin to arrive at the dock manager, Eswar & Aparna realize they only purchased one pair of gloves. They need to go back to purchase another pair. When they return, they realize they also forgot to purchase flour. In other disasters, Will & James realize they forgot their machete on the beach and have to go back to retrieve it. Paying closer attention to their clues than anyone else, Riley & Maddison leapfrog from sixth place all the way to first simply for being wise enough to pack all of their groceries back up and carry it to the boat. Will & James are in second place. The other teams are still frantically having their groceries examined at the dock.

8:35 p.m. – After failing to get a machete, Jerry & Frank must return to the market and they’re officially in last place. They eventually get on their boat to the next clue, but it looks like they left their gear on the beach. They’re gonna need that. Meanwhile, Riley & Maddison are in first place and have just gotten their Detour clue: They can carry a bundle of leaves to a chief’s house and cover a section of roof, or, they can use the items they bought in the market to prepare a meal. When it meets the standard of the chief, they’ll get their next clue. Riley & Maddison decide to haul leaves. Will & James are in second place, but decide to take on the cooking challenge. Back in the boats, DeAngelo & Gary warn Michelle & Victoria they need to bring their stuff from their market with them. After about 20 minutes on the boat, Michelle & Victoria are forced to return for their stuff. They try to communicate the same information to Jerry & Frank as they pass by them, but the father-son duo couldn’t hear them. When Michelle & Victoria return to the beach, they realize they aren’t the only team that forgot their stuff. Jerry & Frank get all the way to the next clue and realize they need their bag. Lots of curse words are said as they head back.

8:40 p.m. – Will & James are first to complete the Detour and will now head to the next clue, where a Double U-Turn awaits. Even though they’re in first place, Will & James completely waste their only U-Turn in the game on Leo & Alana. That was NOT a smart move. Now they’ll travel by river boat to Barco Correa Filho, a cruising Pit Stop. They arrive first, winning a trip for two to Bali.

8:55 p.m. – Michelle & Victoria complete the challenge, but have lost their clue. Meanwhile, Leo & Alana are not good at building the shelter and have to start over. Alana breaks down in tears, but she needs to pull it together. Jerry & Frank just arrived and still have to complete both Detours.

8:59 p.m. – Jerry & Frank finish the cooking challenge and have now realized they were U-Turned. They must go complete the roof-building challenge, knowing they’re in last place. Leo & Alana finish the race and can’t wait to see Will & James. They’re not going to ask them why they U-Turned them, they just want them to know it didn’t work. Coming in last were Jerry & Frank, who have been eliminated from the race. This father-son duo is emotional their race has come to an end, but they enjoyed competing together in the race.