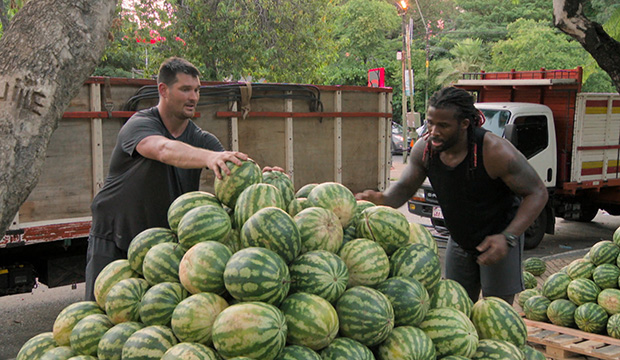 You’ll get not one, but two blasts from the past on Wednesday’s “The Amazing Race.”

The remaining eight teams will jet to Asunción, Paraguay, where two switchback Detours are on the docket. They will have to choose between stacking a pyramid of watermelons or performing a traditional Paraguayan bottle dance.

Leg 3 concluded with Will and James notching their first win after two consecutive victories by Hung and Chee, who didn’t do too shabby in second. Will and James also U-Turned Leo and Alana after taking issue with the two sharing info with Kaylynn and Haley in the second leg. The sisters returned the favor by U-Turning Jerry and Frank, who were already dead last after leaving behind their groceries, allowing Leo and Alana to survive while the father and son were eliminated. If the Yield returns, you can probably count on it being used because this drama will not be forgotten.

Below, check out our minute-by-minute blog of “Olé, Olé!”.

8:05 p.m. – Last week Will & James chose to U-Turn Leo & Alana, who are hoping to get revenge on the boyfriends with their Yield power as the race continues. A rivalry begins! There was a slightly awkward encounter between the teams following the last leg. It seemed like they were all joking with each other, but there was definitely some passive aggressive shade behind the facade. Anyways, as the winners of the last race, Will & James will be the first to depart to their next destination, Asunción, Paraguay.

8:15 p.m. – All the teams arrive in Paraguay at the same time and rush to find taxis at the airport. They’re racing towards an orchestra, but a few of the taxi drivers don’t seem to know where it is. Both Will & James and Michelle & Victoria end up changing taxis. Riley & Maddison get to the clue box first, discovering that this Road Block requires them to use items from a landfill to build a cello. Other teams begin arriving and it’s a mad dash to get these instruments strung up. Unfortunately for Kaylynn & Haley, their taxi driver seems completely lost and this pair has been driven way off course.

8:30 p.m. – DeAngelo is the first to deliver a functional cello, so he and Gary get their next clue. They must travel by taxi to Terere’ Vendor at Mercado 4, where a Yield awaits. Meanwhile Kaylynn & Haley just arrived at the Road Block. DeAngelo & Gary arrive at the clue box in first place and choose not to Yield anybody. In this challenge, players must make a traditional beverage and then fill up a thermos, which they must carry with them for the remainder of the leg. Once again, DeAngelo & Gary complete the task first and reach the Detour, where they must stack watermelons or balance bottles on their head while completing a choreographed routine. Gary & DeAngelo decide stacking melons will be their best bet. Back at the Road Block, Will & James are the second team to complete their cello and head towards the Road Block. They also choose not to Yield anyone at this point in the race. Will & James choose to take on the bottle balancing task. Behind them are Hung & Chee and Leo & Alana in third and fourth place, respectively.

8:45 p.m. – As more teams reach the Detour, they all seem to be choosing to “use their melon” balancing bottles. DeAngelo & Gary are alone stacking watermelons, which could help or hurt their game. We’re going to find out! After struggling with her balance, Hung convinces Chee that they need to switch Detours and go stack melons. Riley & Maddison also decide stacking melons is their best bet, but this is no easy task. DeAngelo & Gary’s pile completely falls apart and they’re getting pretty frustrated. Over at the other Detour, Will & James master their balancing act and launch themselves back into first place. They’ll race to the next Pit Stop at Plaza Italia. The last team to arrive may be eliminated. Will & James win their second leg of the race, winning $5,000 each.

8:59 p.m. – With their third attempt, Michelle & Victoria complete their bottle routine, rocketing from sixth to second place. Meanwhile, Eswar finally finishes his cello so he and Aparna are off to the Detour. Kaylynn & Haley are in last place. Over at the melon stacking contest, Riley & Maddison complete their pile and race to the Pit Stop in fourth place. Eswar & Aparna totally dominate the balancing act and are able to go from nearly last to fifth. DeAngelo & Gary have been stacking watermelons for over three hours and look completely defeated. Lucky for them, Kaylynn & Haley are having an even worse day. It looks like these two teams will be racing to stay in the race. DeAngelo & Gary finally finish stacking melons after nearly four hours and are shocked they beat Kaylynn & Haley to the Pit Stop. Fortunately for Kaylynn & Haley, this is a non-elimination leg. Their race will continue with Speed Bump next week. That’s a wrap!