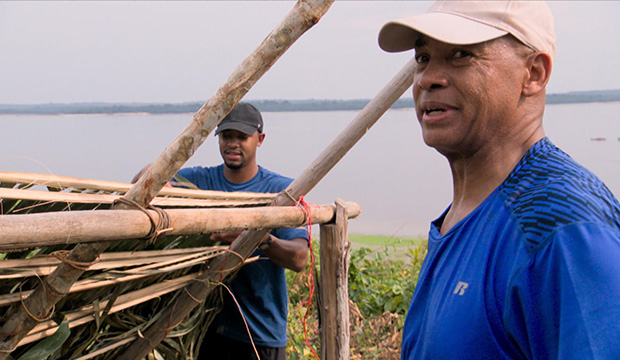 The third leg of “The Amazing Race 32” was chaotic as all out, starting with every team not reading the clue carefully and ending with some Double U-Turn drama that claimed Jerry and Frank Eaves as casualties.

The father and son fell behind early after erroneously following Michelle and Victoria to the boats instead of the market in Manaus, Brazil, but their biggest blunder was not bringing their bag of groceries with them on the boat ride to the Tupé Reserve. The fatal blow came when Kaylynn and Haley U-Turned them to repay their debt to Leo and Alana, who were U-Turned by Will and James for helping Kaylynn and Haley with the truck task last week.

But Jerry and Frank don’t blame any of those teams for their demise. Get their thoughts on their exit and more below.

Gold Derby: What was it like watching the episode?
Frank: For me, it wasn’t tough to watch it. It was entertaining, but you always criticize yourself because you’re like, “I know if we had done that, we’d be fine.” You want to go back and change things, but of course, it was two years ago and it’s over and it’s already recorded. You can’t change anything. It was a little frustrating to watch because you want to change things, but all in all, it’s still surreal seeing yourself on TV.

But as far as watching, I tell everyone, “My wife says I got a face for radio.” So once I’m on TV, I’m like, “Good gosh, only a face mama can love.” [Laughs] But I loved it. I enjoyed every second on the show. I can’t wait for next week’s because I don’t know what’s going to happen. I’m hooked. I’m 59. I’m not as critical on what you did right, what you did wrong. I couldn’t care less. I just had the opportunity of a lifetime and I had done and seen a lot and traveled a lot, but the “Race” is without a doubt the most fantastic thing anybody can ever do with their son. No question.

Gold Derby: I liked what you said at the end about how only one team can win, but you have to make everything a winning experience.
Jerry: There is no lose. We were standing on a boat 20 feet above an Amazon river. C’mon! It’s unbelievable. When we were leaving on the boat and you’re looking at the tribe, and you’re like, “That’s where they live.” And they were as happy as could be. Their spirits were so good, their nature was so good, the vibe was just unbelievable — you felt no negative anything. It needs to be two hours. I need to talk to CBS! There’s just so much this world needs that “The Amazing Race” gives you.

Gold Derby: Is it safe to say you think would’ve had a chance to stay if you hadn’t been the second team that was U-Turned?
Frank: Yeah, I think if we don’t get U-Turned, we do have a chance. That’s why when we had to go back, get our stuff and come back, we weren’t moping. We were getting right to the challenge because we thought we had a chance. Unfortunately, when we saw the U-Turn board — all it took was for a one team to U-Turn the team in front of us and for us not to get U-Turned, and we’re right back in the mix. When we saw we were U-Turned, we still thought we had an opportunity. We just had to knock out the challenge.

Gold Derby: You weren’t a U-Turn target in that no one was really gunning for you, but it was a result of a chain reaction of events because Leo and Alana last week helped out Haley and Kaylynn, and they felt like they owed them, and Will and James did not like that. Do you feel like you got caught in the crossfire?
Jerry: We put ourselves in the crossfire by not having our bags. If we had our bags, there would’ve been no issue. The challenges weren’t hard; we took care of them fairly quickly. Everybody’s worried about what someone else does, but we just didn’t take care of business.

I thought I let Frank down because I thought we were the only team that had forgotten our bags, but watching the show, it was a lot of relief because a lot of teams had forgotten their bags and a lot of pieces of their bags, so we weren’t the only ones. It just happened to be that we weren’t around when everyone was telling people, “Go back and get your bags.” We just happened to be 30 seconds, 45 seconds behind those conversations, so we got left out. But no, I wasn’t upset about getting U-Turned at all. Did you see the board? I thought we looked good! [Laughs] It is what it is. Do the next challenge and worry after that.

Gold Derby: When you passed Michelle and Victoria on the boat ride, they tried to tell you to go back and get your bags. What did you hear?
Frank: After watching the show, I saw that DeAngelo had told them to go back. When they were like, “Do you have your bags?”, my dad and I looked at each other like, “We have our bags, we’re fine.” We didn’t even think that meant all the stuff in the market. I had a little itch that maybe we should turn back, but we were like, “We have our bags.”

I got asked so many times since yesterday, “Why didn’t you take your bags? It’s so easy. I would’ve taken it.” But in the heat of the moment, you’re not thinking. You’re hot and exhausted. We saw other items left at the table, so we’re thinking, “Other people didn’t take it, so we don’t need to take it.” … I don’t want people to think we’re completely nuts for not taking them, but at the same time, it’s hectic and we saw other things, so it made sense at the time.

SEE ‘The Amazing Race’s’ Kellie and LaVonne on their terrible taxi luck: ‘Imagine the worst case and triple it’

Gold Derby: Did you at any point reread the clue that said you had to take your stuff?
Jerry: On the way back. [Laughs] That’s when I told Frank I let him down. It was on first clue of the [11] items.

Frank: Nah. I had rush through and put [the clue] in the bag, so I didn’t give him time to really read it, so I kind of blame myself for being too fast. Honestly, it’s like when somebody’s driving fast on the road and they go past you at 80 mph and you’re going 40, and you get to the light at the same time. What would’ve it had hurt to take an extra 10 seconds to really read the clue, you know? That’s kind of what goes through my head. It would’ve taken another 10-15 seconds to really read and comprehend the clue, but we were rushing.

Gold Derby: Did you also feel pressure because you lost time running around the boat area with and Michelle and Victoria at first?
Jerry: That put a little pressure on us. Frank had itch about the bag. Going down the steps, I had an itch, like, “Hmm, I just don’t know.” But Frank had done such a good job on the other challenges, we went with it, but I felt we were not going in the correct direction. That’s another thing where you have a gut feeling, but, again, you just don’t know.

Everyone says, “Why didn’t you?” Watching it, a few of the teams were let out directly in front of the market. They got out and walked straight into the marketplace where the clue was. Our cab driver let us off a block and a half down. He said, “Right up on the left.” … I tell people it seems easy, but think about New York City and someone drops you off a block and a half away. You don’t know if you take, which we did, a right, you’re going in the opposite direction. You take a left and you’re right up on it. A lot has to do with the cab drivers. … The first leg, our cab driver took us right in front of the market with the barrels we had to roll. Other cab drivers let people out way down the street and they were running around trying to find the barrels. It’s just the luck of the draw. Sometimes it’s out of your control on where do you go first.

Gold Derby: Who were you rooting for of everyone left?
Frank: It’s tough to say. I really didn’t have any issue with any of the groups. I think DeAngelo and Gary are pretty cool. They played for the [Carolina] Panthers. My dad coached for the [Charlotte] Hornets. We lived in Charlotte for a while, so I thought it was pretty cool. There is no straight-out favorite team of mine. I like to see people compete.

Jerry: I really liked all the contestants. I think the race did a great job with the diversity of the contestants. All of them brought something different to the show. For someone my age, it was great to see the youth and to see — you know, some people talk too much. You can see they were trying to build alliances. I had no favorites. I’m looking forward to watching the show.