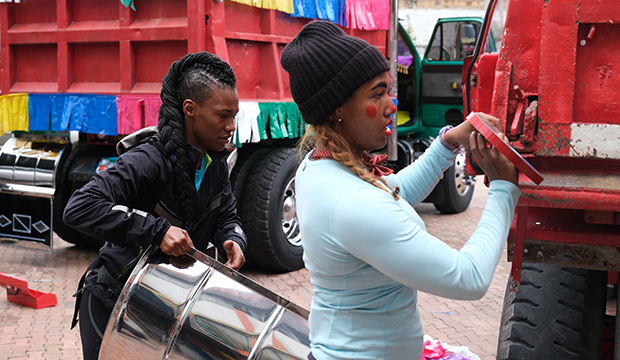 Kellie Wells-Brinkley and LaVonne Idlette had a rough first leg on “The Amazing Race 32,” and things got worse on Leg 2. The Olympic hurdlers got tripped up by a bad taxi driver in Bogotá, Colombia, on Wednesday’s episode, and ultimately were eliminated.

They ostensibly had a shot when they caught up to other teams at the truck task and lucked out when Leo Brown and Alana Folsom told Kaylynn and Haley Williams to check the horns, prompting them and Jerry and Frank Eaves to do the same. But what you didn’t see was that they got lost for 30 minutes heading to the Pit Stop afterward, so they never stood a chance.

Find out below just how badly they got lost the whole day and why they feel the “Race” is harder than the Olympics.

Gold Derby: How far behind were you ultimately?
LaVonne: At the very, very end, we were probably 30 minutes because our taxi went the wrong way for 30 minutes after we left the trucks. We left the same time as Frankie and Jerry, and we were hoping if we get to the park at the same time, we’re gonna outrun them. That’s the plan. But we go the wrong way for 30 minutes and we only realize it because I’m counting the streets, like, “Wait a minute, we’re going to 45th and 7th. This is 54th.” And it looked like the numbers were getting bigger. [Laughs] What’s going on?!

Gold Derby: So it’s safe to say you guys figured you were last unless one of them also went the wrong way for 30 minutes.
Kellie: Right, and we figured that probably didn’t happen because no one had a worse driver than we did. We knew, like, “Dammit. Hopefully it’s a non-elimination leg.” But it wasn’t.

SEE ‘The Amazing Race 32’ episode 2 recap: The Yield is back after 13 long years

Gold Derby: Did you try changing cabs or were you not able to do that?
Kellie: [We were stuck with him] the whole day. It said you had to take a designated taxi. There were marked taxis, so we had to stick with our marked taxis. We thought about it, but we were like, “Eh. Phil [Keoghan]’s really strict.” You don’t want the penalty if you don’t need it. And there was no way to get a new taxi during all the chaos.

Gold Derby: Did you get lost every time you were in the cab? He didn’t have a charger for one trip, but then he got a charger. I guess, how badly did you get lost the whole day?
Kellie: Oh, imagine the worst case and triple that. It was so bad because we left the tower first. And then once we were on the highway, there was so much traffic. It was like a two-hour ride and we got lost for that two-hour straight ride.

LaVonne: And he was not following the GPS. So even when we had GPS, he wasn’t following it.

Kellie: It would say to take a left, and he would go straight or turn right. I was like, “Oh, he hates us.” And we were really nice to him. We promised him a big tip and it didn’t work.

Gold Derby: Did you ask why he ignored the GPS? Did he say it was a shortcut?
Kellie: Yes, he said it was faster. Because there was traffic, so we’re thinking, “OK, this is his place. He’s navigating.” He did not. [Laughs] He did zero.

LaVonne: He must’ve been from Nemocón, where the salt mines were, and not from Bogotá, where we were going, because he didn’t know a single thing about the city.

Kellie: Like nothing. We would ask him, “Do you know this place? Do you know this park?” You watched the show — they were prominent places; they were not obscure. They had something to do with the history and the beauty and the culture of Bogotá. He knew about none of that.

Gold Derby: You did catch up at the Roadblock. If Leo and Alana hadn’t told Kaylynn and Haley about the horns, how soon do you think any of you guys would’ve figured that out?
LaVonne: Maybe never to be honest. [Laughs] From the time we had finished [decorating the truck] and thought we were done and got it checked, it was another hour and a half until we figured out the horn part. It was just nerve-wracking, like nine checks later.

Gold Derby: Did you reread the clue at any point?
Kellie: That’d be a negative. [Laughs] We were even there when Will [Jardell] and James [Wallington] got it, and the guy blew the horn. But we were so in our own bubble, I don’t even remember hearing their horn sound. If I would’ve listened and been more aware, I would’ve been like, “Dammit! They have a horn!” But I just never heard their horn go off. Even last night, when I was thinking about it, I was like, “I never even heard that.” So it’s amazing that you could be so wrapped up in it. But I wish we reread the clue, absolutely. But even if we had gotten it first, we probably would’ve still come in last because of our taxi driver.

LaVonne: I remember hearing the horn, but there’s nothing about a horn that would make me look under a car. [Laughs] That’s literally “get inside the car and press the button on the wheel” to me. In hindsight, I remember the clue said something about a horn, but also not thinking about the thing that’s on the front of the car.

Gold Derby: I think the other part is that even though the guy was hitting the horn every time he approved a truck, you would just assume that was his signal to say that you completed the task. It’s very easy to be at home and say, “How are you not checking it?” because we know the answer.
Kellie: Exactly. That is my one takeaway from this whole thing that I want the world to know. When you’re at home, eating your popcorn, having your glass of wine, it looks so simple. I think this was Day 5, so what you guys see in one hour, it’s multiple days. We’re sleeping in a cave, it’s freezing, the bathroom is literally a mile away uphill. We had DeAngelo [Williams] — who I love from the bottom of my heart — who snores like an earthquake, so you can’t sleep. There’s no food, you’re hungry, you’re tired. It’s exhaustion and being hungry and thirsty. It does something to your mind. You’re not functioning at 100 percent — you’re not even at 50 percent. I have much more grace now when I watch people do reality stuff because I know it’s set up for you to not do well, and there are some outside factors that people will never see, like five days with no bed, no shower.

Gold Derby: You had two really tough legs. Which one was harder: the first one with Kellie and the drums or this one with the bad taxi luck?
LaVonne: I definitely think the taxi by far. Things that are under our control, we could blame ourselves, like, “Oh, I didn’t get it.” I went really slow across the tightrope, trying to make sure I wouldn’t have to do it again, and if it came down to, like, “Oh, you did that too slow,” it would’ve been way easier for me to take that blame.

Kellie: Facts. I definitely agree. And the crazy part is, both of the challenges we completed separately were meant for the other person, which is hilarious. I’m the daredevil — I love heights and twists and turns. I wanted to jump out of a plane and bungee-jump on the show. And LaVonne has been in a band since you were in, like, elementary school. So she should’ve done the drums and I should’ve done the tightrope, which is hilarious. But we both completed tasks that we’re not good at, so that also shows people to try new stuff.

SEE Everything to know about ‘The Amazing Race 32’

Gold Derby: How does “The Amazing Race” compare to the Olympics?
Kellie: It doesn’t. At the Olympics, I knew my flight lands at this time at this airport, there’s gonna be someone with a cute sign with my name on it, and in the village, I’m gonna relax and rest. I’m going to run three rounds of races, and there are 30 hurdles from the start line to the finish line. That’s it. “The Amazing Race” is a lot of controlled chaos. They take you places and drop you off, you have to wait for hours, you don’t know what’s happening, you don’t know where you’re going. You’re hungry, you’re sleepy, you’re with people that you don’t know. I’ve never rolled around the streets of Colombia at night. I’m a little bit more cautious than that. It’s the unknown. Those people are geniuses because what they throw at you — good lord.

LaVonne: Definitely. For the Olympics, you prepare in a methodical way over time. You know what to expect. In this situation, we were preparing for random things, like hold your breath for two minutes just in case. [Laughs] It’s so much unknown that you start to get anxiety, worrying about, “Am I prepared enough? Will I be able to eat fried cricket?” You can’t even prepare for that because in one situation, it may not work out, but under different circumstances, it might not. If you’re a little more tired or a little more disoriented, you’ll throw up quicker than some other times. It’s one of those incomparable things. I thought it was way harder in preparation mentally. They kept trying to scare me and said they were gonna drop us in open water. Bye! [Laughs]

Gold Derby: Who were you rooting for after you got out?
LaVonne: I was rooting for Aparna and Eswar [Dhinakaran]. I like lethal nerds. They’re unsuspecting nerds who are smart, but they kept showing random knowledge. Eswar speaks fluent Spanish. Who would’ve known? They’re cool.

Kellie: I fell in love with two teams in particular. I love Jerry and Frankie. Jerry became like dad to everyone instantly and I mean the whole gang. He was running stuff from a different perspective. Love them. And then the beard bros, Maddi and Riley [McKibbin]. They’re so sweet, they give really good hugs, and we talked about sports and the Olympics. Their goal is getting to the Olympics, so we could give them a different perspective because we’ve already been there. They’re really smart and talented too. They know weirdo stuff too, so whenever you have teams that know random stuff and how to do it, they’re very dangerous.